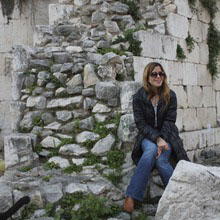 Ivana Ivkovic Kelley ’95 has launched a Kickstarter campaign to complete post-production of a documentary film she is making on the use of systematic rape as operational military doctrine during the Bosnian War. The fundraising campaign is the second associated with the project. A successful first campaign of $16,000 supported travel, filming, and production costs of the project, which is titled Persephone Speaks: The Forgotten Women of Bosnia. “The sexual violation of women erodes the fabric of a community in a way that few weapons can,” she wrote. “Rape’s damage can be devastating because of the strong communal reaction to the violation and the pain stamped on entire families. “I’m excited for this film to shed more light on the issue of sexualized violence, and hope this will be the first of many documentaries to come.” Ivkovic was born in Croatia and emigrated to the United States (Chicago) as a young child. Growing up she spent alternate summers “home” on the Adriatic coast with Croatian friends and relatives. Her first year at K was the year the Serbian army invaded Slovenia and Croatia, beginning the Bosnian War. For her Senior Individualized Project, Ivkovic worked for Kareta, a small nonprofit feminist group Zagreb, assisting survivors of Serbian rape-death camps.

After graduating from K (political science and women’s studies) Ivkovic earned an M.F.A. (playwrighting) from the University of Southern California and then worked for a number of small production companies and large studios in Los Angeles. She has interviewed many survivors of the war in Bosnia and recently left her studio job to devote her full time to completion of the Persephone project. The second Kickstarter campaign has less than a month to complete; readers are invited to participate.