The COVID-19 lockdown in Pakistan has meant that folks who cannot afford to stay home are being arrested and punished for breaking the law. Jails and lockups fill with lockdown violators while the long-term and indefinitely incarcerated sit forgotten in overcrowded prisons. The government has established aid programs, but they are woefully inadequate in the face of hunger generated by its own neoliberal policies. Riots over ration distribution are rife and will rise as coronavirus infections also rise.

As we read about race-based vulnerability to COVID-19 in the United States, the affinity and resonance between power structures in empire’s metropoles[1] and its outposts are ringing clearer. Once lockdown was declared in Pakistan, policing measures saw beat cops pulling over men on motorbikes, beating them with latthis (police batons), and taking them en masse to lockup, where they were made to do a set of schoolyard calisthenics designed to infantilize and humiliate grown men. Similar measures appeared in India, where migrants were pulled off a bus and sprayed down with disinfectant by local authorities.

Prominent public intellectuals speak in stark terms of the “trade-off” between public health and public hunger even as the measures to alleviate one scupper the other: a woman died in a stampede at a cash distribution center in Multan waiting, with dozens of other women and children, for Rs. 12,000 (USD $75) from local authorities. Needless to say, the requisite 2-metre (6-foot) distance between applicants was not being observed.

Meanwhile, Pakistanis are doing what Pakistanis did in 2005 when a 7.6 earthquake devastated Kashmir and Gilgit-Baltistan; and in 2010 when torrential monsoon rains flooded the Indus riverine  system: Pakistanis are gathering whatever resources they have to help each other live safe till tomorrow. Social media are flooded with calls for “chanda” , “zakat”, “sadqa” (variously inflected Urdu words for giving) to buy masks and personal protective equipment, but mostly food for families struggling to eat and live.

The international press has covered these efforts as the heartwarming and surprising revelation that there is generosity and community care in Muslim cultures. But what Pakistanis know from the last two decades of coping with environmental and human catastrophes is that our people have never really relied on the government, democratic or  martial, for anything much; carried no expectation of the state other than an expectation of caprice.

Which is not to say that the state is never held accountable by the people: quite the contrary. Doctors have staged sit-ins and hunger strikes to force the government to provide personal protective equipment. They have revealed, as frontline workers everywhere have been revealing, the inner workings of how the sick and the dead are counted or not counted in the official COVID-19 tally.[2] They have been beaten with the butts of AK-47s and arrested by the police for it.

A peculiar economy of self-interest and mutual aid runs on an Urdu maxim kal kisne dekha hai which I like to liberally translate as Have you ever seen tomorrow? Meaning, there’s no telling what the next moment will bring, and that is sufficient reason to make a decision in this moment to venture out in search of work during a lockdown; to queue in the heat  and risk being “jostled” to death among dozens of others as you wait for a minimum wage stipend from the state; to bring sacks of rations to your neighbors because you know they can’t get out to work or eat. Pakistanis always know: Today is what’s happening; tomorrow is just a rumor.

Today, Pakistan is made up of community kitchens set up in slums to help nomad Pakhiwas family break their fasts. Parcels are passing from hand to hand containing grain, sugar, personal protective equipment, medicine. Calls for help fly from phone to phone across all forms of social media, as do announcements of funds drives. People do what they can when they can, building networks of support and exchange that are outside, besides, inside and in spite of the state, networks that count the state as one of many capricious actors, that count on religion as a prime motivator to care for each other, and that ultimately demand of each other nothing more or less than basic humanity.

None of it is adequate to fill the gap left by the state, but these stories and practices, these networks we can see clearer when the state fails—they are the working drawings and raw materials that tomorrows are made up of. They are how our peoples carry the weight of time and power, building the road as we walk. And tomorrow? Yes, we’ve heard the rumor.

[1] I’m referring here to the currently neoliberal empire run by the US, in which Pakistan has been an eager junior partner through two wars in Afghanistan and the never-ending War on Terror. Ayesha Siddiqa provides a cogent summary of Pakistan’s relationship to the US.

[2] This video is bilingual in English and Urdu. The doctor speaks from the floor of a hospital lobby in Lahore, where he is on hunger strike, recounting the story of a nurse in Gujrat, “shaheed [martyr] Sadaf Jamil, who died performing her duties on the corona ward.” Upon exhibiting COVID-19 symptoms, she asked to be tested, but was denied and her subsequent cause of death was recorded as respiratory failure rather than COVID-19.

Kyla Pasha is a Pakistani poet currently growing lockdown potatoes in a sack on her balcony in Phoenix and writing her dissertation at Arizona State University. She is a PhD candidate in religious studies, writing about gender, space, and Muslim ritual lives. She takes part in Langar Mutual Aid. 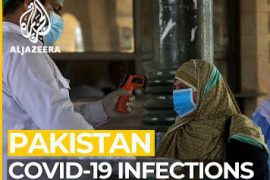