During this year’s Grammy Awards Stevie Wonder reminded viewers to appreciate the “healing powers” of music. This lovely sentiment, as well as the well-loved adage that “music is a universal language” suggests that music is the one thing that soothes all tension and brings unity among all peoples. But musicologists and ethnomusicologists disagree with this notion. Although music can be a powerful art form that conveys human experiences, understanding its cultural implications is more complicated. We argue that although we can all aspire to feel the emotion conveyed in musics from around the world, we cannot truly understand all the particular devices and functions of each culture’s music.

Consider, for instance, Kendrick Lamar’s astounding performance that night. As a socially conscious black woman, I responded enthusiastically to every frame of his performance—from the sharp sounds of the shackles in the prison chain gang scene to the jubilant African dancers and intense drumming. It was not just artistic and interesting, it was a palpable expression of my ancestors and my blackness. Since that night, social media has offered memes of a white audience watching his performance with curiosity and bewilderment. While these memes are amusing, they are also indicative of how deeply vital his performance was for many black people, and how foreign it may have been for others.

But people still like to believe the idea that music brings us all together. In the midst of this fragile racial environment that has caught up to us in 2016, it would be nice to be able to turn to music and see virtual bridges where we can walk towards each other. The truth is that most of the popular music that was recognized by the Grammys does not build bridges. Indeed, it is a fact that the music industry and radio have historically divided the music markets along racial lines. Since black music was marketed as “Race Music” in the first half of the 20th century, the music industry and evolving radio formats have largely kept these segments distinct along racial lines.

Catering to their particular audiences/markets, popular artists often infuse their music with political messages that are critical to our understanding of race and identity in the USA. Most recently, Beyonce, Macklemore, and Brad Paisley have given their audiences much to think about in terms of race, identity, and power. Beyonce’s “Formation” has unsettled her mainstream audience by revealing a layer to the artist that they had never imagined was there; Kendrick Lamar’s “Alright” became the anthem for black student protests across the country; Macklemore challenged his white audience by dropping the 8 minute long “White Privilege II”; and Brad Paisley released a boldly titled “Country Nation,” which painted a prideful portrait of rural southern culture.

All these artists make legitimate statements about a slice or two of US identity. With rich artistry, they raise awareness, teach history, engage our cultural understanding, and buoy our self-esteem. Cultural and music critics on mainstream outlets and social media continue to weigh in on what all this contemporary music tells us about who we are and why we remain divided.

So, how can American pop music “heal” these divisions? I contend that there is an American music genre that can do this – that not only challenges us to examine our roots by looking beyond the social construct of race but also remind us that “American” music shares some common ground. Roots music is synonymous with folk music, which is the musical embodiment of “the folk,” the people who constitute a cultural identity. Because, traditionally, commercial rewards are not the primary focus for roots or folk music, there are fewer compromises with regard to artistry or motivation to represent the folk. Thus, American Roots music is a category in the Grammy awards that is never televised because it is not as exciting or sexy as pop, rap, country, or rock. Given the tensions we face as a nation in 2016, it is to American Roots music that we must look if we want to find that “healing power” that Stevie Wonder talked about.

While I maintain that all music is not universally understood or comprehended, I would argue that there is some music where the deep emotions conveyed reference a shared and interwoven history and can therefore be understood by more than one sub-cultural group. As a genre, American roots music has the ability to pull disparate cultural groups together. If there is healing to be done, and if we are to believe Stevie Wonder’s statement that music has the ability to do this, then it is American Roots Music that can lend a salve to the tensions we have been feeling lately.

A brief look at the 2016 Grammy nominees for American Roots Music performance reveals a critical space to go to for a healing conversation. They include a diverse mix of artists, none of whom need the highly technologically savvy production quality that has come to be associated with American pop music.

Bela Fleck and Abigail Washburn deliver a stunningly beautiful song titled “And Am I Born To Die” in the old Irish/Scottish ballad tradition of “Danny Boy” including religious references. Fleck’s haunting strings, picked up from every corner of the world including West Africa, support Abigail Washburn’s lovely soprano with its charming lilt that might be heard as a twang.

The second nominee is the legendary Buddy Guy with his song “Born To Play Guitar.” Like the Fleck/Washburn collaboration, its simplicity is divine. Buddy Guy exemplifies that electrified sound that found its way around the world, and in his hands, we are reminded of the American city, urban spaces where so many black people migrated from the rural south like Buddy Guy himself who tells us in the song that he was born in Louisiana and he’s “got the blues running through my veins.”

Next, The Milk Carton Kids, a guitar-playing duo with tight harmonies reminiscent of Simon and Garfunkel. Last year, with an incredible display of their guitar virtuosity, they performed their nominated song, “City Of Our Lady,” at the Grand Ol Opry, country music’s legendary stage. Their lyrics are inclusive and inspired: “Everywhere we go we are the child of where we came.”

“Julep” by the Punch Brothers is a sweet love song in the tradition of all good country love songs. With its pulsing bass line we are reminded of a slowed-down bluegrass song. Each of the stringed instruments adds a delicate layer to the sonic landscape. It is the banjo that stands out, sounding at times like an old West African kora, which makes sense since the banjo also originated in West Africa.

The deep smoky robust voice of Mavis Staples is the last nominee in the American roots category. She remixes an old blues song, “Lord Have Mercy On My Soul,” that has been performed by everybody from Blind Lemon Jefferson to Bob Dylan. In the hands of Mavis Staples, this powerful gospel becomes a compelling women’s empowerment song and with this song, Staples wins the Grammy award.

Needless to say each of the nominees is worthy of accolades and our attention to their contributions in elucidating the American folk experience. Yes, we are black, white, Asian, Latino, bi-racial, and everything else. But we are also all American folk.

It is a shame that the Grammy Awards, with so many millions of viewers, never sees fit to showcase the musical place where we can all be “American folk.” At the heart of the American Roots category is the memory of where American music comes from. If music is to heal, if it is to build bridges, it must be given a chance to be heard and experienced. We should all be given an opportunity to experience and remember the simplicity of the music and the sound of beautiful American voices, which lift our spirit and move us towards a center we have not seen in a long time. 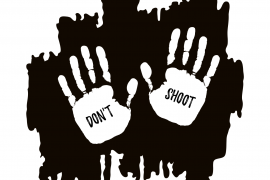 The Post-political City And The Insurgent Polis
Forging Understanding: A Black Internationalism For All Black People