People have, at all times, been fighting against something heinous in the United States. Despite the ongoing injustice, oppression, and alienation that exists in this country, music is a saving grace for the nation. Dominating global markets, American pop, hip hop/rap, blues, and soul are known to people around the world. This music has its roots in Black America: music that often was and continues to be custom-made for survival. This sonic survivalism has been offered to everyone by the mere fact that its universal consumption has not been questioned much in the mainstream. Black music is for everybody (especially Black people). Like several other aspects of Black culture, the music is universally owned or claimed, although there are times when it becomes scapegoated for being responsible for a particular social ill; then it is solely Black people’s music. Still, it is consistently enjoyed by many through the ups and downs of the times.

The sounds that Black people have made across the Americas have reflected what our experiences have been here: persistent struggles and efforts to survive, maintain, and thrive. Therefore, the nature of Black music in the Americas is often rooted in endurance. Struggle, love, spirituality, and perseverance are ever-present themes in music from different African-descended peoples of the Americas as well as the African continent and diaspora.

As we entered into scary and unpredictable times with no end in sight, I compiled a playlist for survival. It is a Black centered playlist with mostly Black artists from the US. My reasoning here is that the Black struggle in the US has been central to so many of the struggles for human rights across the nation. Black imagination and creativity have been vital to inspiring and shaping the culture and the fabric of what is declared “American” society. It is my hope that my people and others allied to the struggle for progress across the country will find inspiration in the 100-plus tracks I handpicked for this playlist. I did not stick to one genre, country of origin, or movement. The only common thread I tried to maintain was that the songs have inspirational Black significance.

Our present moment is one that is consumed by discomfort and worry. Music can alleviate some of this for many, even if just for a moment. It can make a difference. We have a long road ahead and in a country that lacks universal healthcare, social equity, and peace, music can be a healing medicine for our hearts, minds, and souls. Enjoy.

Notes on why certain selections were made (in no particular order):

[1] “(Don’t Worry) If There Is A Hell Below, We’re All Going To Go” by Curtis Mayfield is one of my favorite songs on this playlist. It’s first because it almost perfectly syncs up with the current state of affairs in the USA. It embodies a sense of hopelessness, frustration, and pessimism that I feel personally and is shared among many of my peers. Mayfield appears more than once on this playlist because he’s crucial when it comes to Black survival music and he’s inspired so many after him.

[3] “Turiya & Ramakrishna” by Alice Coltrane is one of my favorite songs of all time. I can’t listen to it without feeling rejuvenated and calmed by Alice’s amazing composition.

[4] “All Hid” by Camille Yarbrough is a prophecy. Heed the warning in this song that was many decades ahead of its time.

[5] “You Haven’t Done Nothin’” by Stevie Wonder should be specifically dedicated to the Democratic Party in my personal opinion, and it’s a good song for frustration with lack of progress.

[6] “To the Establishment” by Lou Bond is a rare song with interesting lyrics at times. It made this playlist because it captures the feeling of never giving up or giving in.

[7] “Behind the Curtain” by Ibeyi is a perfect song for loss. During hard times, there will be loss and this song deals with it in a spiritual way connecting the “New World” African diaspora back to spiritual roots on the African continent.

[9] “When Friday Come” by Barrington Levy is one of my favorite reggae songs of all time. Levy complains about the stresses of everyday life, work, and family. It’s a great song when you just need to relate musically to the struggle of just living.

[10] “Sally Ride” by Janelle Monae is a really powerful song with vivid lyrics that pull from symbolism strong within the Black church. Paired with Monae’s Afrofuturistic tendency, this song and many others on the playlist that reference space are good for when you feel you need to get away.

[11] “But It Comes Out Mad” by Camille Yarbrough deals with the struggles of love in times of stress and turmoil.

[12] “Wat U Mean (Aye, Aye, Aye)” by Dae Dae has been a popular radio hit in 2016. The Atlanta rapper’s lyrics present a message of everyday aspiration. Praxis Center’s Stephanie Shonekan spoke about “personal anthems” for people this year at the With/Out – ¿Borders? conference. This song definitely feels like it could be a personal anthem for many right now.

[13] “Most Things Haven’t Worked Out” by Junior Kimbrough is a stinging blues instrumental with a self-explanatory name. It’s good music to think to.

[14] “Que Sera, Sera (Whatever Will Be, Will Be)” by Sly & The Family Stone is an amazing song for learning to live with the ups and downs of life. Sly appears multiple times on this playlist because of his musical genius and his lyrical outlooks on life come across as very relatable for many people just trying to make it.

[15] “Capital 5…” by Shabazz Palaces is an amazing song. They have a few on this playlist since they’re a very overlooked and underrated hip hop duo (percussionist; Tendai Maraire and Ishmael Butler, formerly of Digable Planets) that makes multi-layered conscious music. The layers to their music and the messages in their songs are often very thick with meaning. Their songs often express a subtle Black rage.

[16] “Settle For My Love” by Patrice Rushen is an important love song that is one of the greatest ever made. It feels right to be thinking about love right now.

[17] “Blue Wine” by NAO is a beautifully spacey track filled with feelings. She’s one of the most important burgeoning artists out right now.

[18] “Miracle/Wherever (feat. TC & D-Loc)” by Ty Dolla $ign is an emotional song when you consider the fact it was recorded with his brother who is currently serving a life sentence in prison. Ty Dolla is very outspoken this and the optimism in this recording is mixed with the harsh reality of his brother’s sentence is really amazing.

[19] “Death to All Racist” by Scientist is an amazing dub track. Scientist is often politically outspoken with his track names and though he’s sampling other artists, he still manages to get his messages across.

[20] “Someday We’ll All Be Free” by Donny Hathaway can help you make it through those heavy days when you need to feel something hopeful. Donny appears multiple times on this playlist and his daughter Lalah is on here too. The song’s title is my hope for the future. 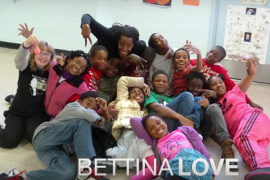 Hip hop, grit, and academic success
One Week of Poems on Love and Terror 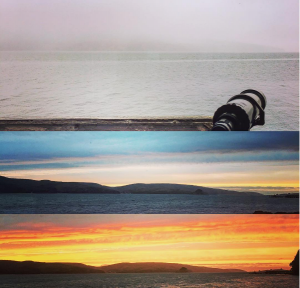