Last year I participated in a conversation on WSTS (West Side) Radio’s roundtable on community engagement and activism called “Activism in Our Community, Honoring MLK” on “The Corner,” a topical show that focuses on current news, events, hot topics and issues relevant to diverse communities in Chicago.[1] The creator and co-host Nicole Harrison provided all of the participants – which included Kimeco Roberson, Jasson Perez, Tillman “TC” Curtis and myself – with brief bios in an effort to have us familiarize ourselves with one another. I was familiar with the majority of the panel and knew them to be activists. But when I read “activist” in my list of descriptors I was taken aback.

Until that moment, I hadn’t thought of myself as an activist and was surprised that Nicole, who is a good friend of mine, viewed me as such. She was equally surprised that I’d never considered myself an activist. I confessed that I’d always viewed myself as a behind-the-scenes accomplice and solutionary, a change agent. I wasn’t bold enough, so to speak, to be on the front lines with picket signs. After a short debate, discussing and juxtaposing said actions of “the activist” and “the change agent”, we determined that, at the core, the roles are synonymous. Whether the actions are on the frontlines or behind-the-scenes, all are carried out by people who have accepted the charge to be committed to changing the current injustices in the social climate and therefore committed to social justice.

Fast-forward two months. I was struck with the good fortune to be appointed as a visiting instructor and resident archivist for social justice at the University of Illinois at Chicago. In this position, one role that I’m charged with is building on prior work and further documenting the lives of Chicago residents in West Side communities.

I knew that working with and within marginalized communities was complex, especially if one is not from that community. Thankfully, West Side community leaders, the UIC Gender and Women’s Studies Program and the College of Liberal Arts and Sciences had already laid the groundwork for me when they joined forces in 2010 to create the documentary “West Side Women in Action.” This film focused on women as “agents of change”[2] who made tremendous differences and gains in West Side communities and neighborhoods by affecting the local politics, economy, landscape, and increasing access to local history and community archives.

Brenetta Howell Barrett, Brenda Palms Barber and Eunita Rushing are just three of the remarkable women highlighted in the film. Brenetta is an activist whose career included work as a journalist, community organizer, political candidate, fundraiser and agency executive. She co-founded numerous West Side organizations and was a key figure in Harold Washington’s mayoral runs in 1977 and 1983. Her archival collection, the Brenetta Howell Barrett Papers, can be found at the Harsh Research Center at the Woodson Regional Public Library.

Brenda is the CEO of Sweet Beginnings, LLC. and a board member of the North Lawndale Employment Network. Sweet Beginnings, LLC, which manufactures and sells BeeLove Products, “not only respects the earth in the production of their products, but also provides important transitional job opportunities for area residents who struggle with barriers to employment.” Once while shopping at Whole Foods, I was introduced to the line of BeeLove products by a Brother, a young African American man, at a Sweet Beginnings table offering free samples.

Eunita, President of the Garfield Park Conservatory Alliance, believes that the Conservatory “changes people’s lives through the power of nature” and has developed numerous programs that benefit the community with a specialized focus on the youth.

To build on this work of documenting the lives of West Siders in action, I decided to conduct roving archival workshops in West Side Chicago communities.

I knew that “hidden treasures” were bountiful on the West Side. As an archivist, I wanted to help uncover the stories, the experiences, the voices, and the hidden history of the West Side by excavating the ephemera, papers, photos, videos, and other artifacts that were likely stored in church basements, storefronts, and West Side residents’ closets. Within these collections of materials, I imagine that the “hidden treasures” one might find will include unpublished, original documents handwritten by the authors or art signed by the artist who created the work-one of a kind, unique items, which is the key factor in assessing archival value. Archivists seek materials of intrinsic not extrinsic value. Archivists always encounter materials that might be of value to the owner but may not have archival value. For example, a laminated copy of a 1996 Championship Chicago Bulls poster insert from the Chicago Sun-Times that might be found in someone’s personal collection does not hold the same value as a Michael Jordan autographed copy of a limited edition 1996 Championship Chicago Bulls poster. But how to begin my search and excavation?

As an “outsider” (aka South Sider) and as a representative of a major academic institution, one that has contributed to the tensions and distrust of the surrounding neighborhoods and communities, I knew that I would need help reaching out to West Side residents. I did what any true Chicagoan would and reached out to my network and naturally looked to the ones I knew best, my family, to aid me with these challenges. Like many other Chicagoans, my family had been a part of the second great migration from the South (Mississippi, Tennessee) to the North (Chicago, Michigan, Indiana) and settled as a majority onto the West Side of Chicago. My parents moved away from the West Side in the early 1970s, which added to my discredit, as my cousins often tease, in becoming a South Sider.

For me, talking with people to build relationships, with the aim to remain connected and implement change, is second nature. My grandmother often reminds me that I’m a stranger to no one, but I’ve learned that this particular skill or character trait does not come naturally for everyone.

Meet People Where They Are

Almost immediately after “putting out my call (for help)” – I emailed and called family members, friends and colleagues who either live, have lived or have relationships with West Side residents and organizations – it didn’t take long for me to connect with a West Side resident known to the community as a local “people’s historian” who introduced me to the Pastor of one of the oldest, established Baptist churches in Chicago Founded by a group of runaway slaves who arrived in Chicago by way of the Underground Railroad, the church has a rich history of struggle and migration.

During my meeting with the Pastor, he agreed to allow me the opportunity to provide archival workshops onsite with the contingency that I would also provide archival management skills to further develop the church’s “History Room.” Realizing he’d enlisted my services as additional duty, I chuckled (inside) at the notion that we all must have our needs met by any means necessary especially when considering the greater good. You have to give in order to get. Plus the deal was sweetened when he informed me that I would be assisting the “History Room” manager, a retired librarian. After all, I had come to him hoping to collaborate on conducting “roving” workshops with only an inkling of how I might actually obtain approval and support. I needed to be open-minded and flexible, not to mention the two and a half hour long conversation took many twists and turns – from the importance of higher education to male youth empowerment programs and feminism – before landing on the actual subject of archiving.

I was glad to accept a formal meeting place at the church where I could receive inquiries and host discussions on how to maintain, preserve, and share local community and family legacies. Although my initial objective of conducting archival workshops throughout the West Side as a “roving” archivist who “met people where they were,” what I looked to as a model of true community engagement, didn’t happen the way I planned I still felt accomplished.

My plan for future opportunities to conduct roving workshops in barber shops, beauty salons, church basements, community centers, park district field houses, elementary and high school classrooms, etc. would just have to wait. Having a home base at this West Side church will provide the foundation for a series of workshops designed to help community members and local organizations preserve, document and provide access to their collections.

I believe it is imperative that the narratives and contributions of marginalized groups be ingested into the over-arching dominant records of history. As an archivist, my mission is the same as my objective as a photographer: to bring those individuals and groups shunned into darkness into the light, to provide a pathway to the unsung contributors of our society whose stories and contributions would otherwise remain unknown. As an African American archivist, not to be confused with an archivist who happens to be African American, my drive and passion is to provide a pathway to undocumented, unrevealed community histories and individual stories of African Americans. As a native Chicagoan, I feel a profound sense of belonging and excitement working as an archivist with the materials I have encountered. I have a direct connection with the majority of the projects I have completed over the last eight years, which aided in the development of the city from the Chicago Art History/Black Arts Movement, the Great Migrations, social and political art ephemera, city-wide and neighborhood politics, the civil rights movement, civil rights movement leaders, union and labor movement leaders, institution builders and so on.

To be a social justice archivist is to be an activist: one who does not waver when pushing for inclusion and proper representation, one that intentionally incites the static and the status quo, and one who supports communities having agency over their stories, histories and contributions to society.

Skylah S. Hearn is a Visiting Instructor and Resident Archivist for Social Justice at the University of Illinois at Chicago. In her “calling” as an archivist, she’s excused for being nosey, praised for not tossing “stuff” out and a champion for the unknown, often unsung community, cultural and societal contributors from African American groups and other groups not of the hegemony. 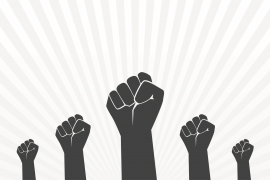 Michigan in Color: “Your people”
A Short Introduction To Historypin
Navigate