He felt something whizz past him, ricocheting off a metal vase and slamming into some part of the wall downstairs.  A smattering of glass objects crashed to the floor below, taking an eon to crumble under jack boots, like a slow-moving cinematic moment.  The ting of a bullet against a fire hydrant.  A cascade of grumbles pressing against the screen door.  Heavy foot stomps over the roof, shuffling like a two-ton dance number – bellowing and circumspect.  And then something else.  Dishes and more glasses perhaps, or something sounding like Max Roach’s cymbals in the back of Clifford Brown’s staccato run, falling and crashing from a thousand foot drop.  Down the street, echoes of his grandmother’s cries coughed, sputtered, gasped like a beat-up West Oakland jalopy careening along Linden and 30th Streets.

“He ain’t done that.  Would never do that –” A flurry of bullets crack off in the distance and the jackboots shuffle outside to blank looks and silence.

He huddled in the tightest spot, balled up like haughty coil, deep within the attic.  His fingers ached at the tips, and blood meshed with dirt on top of his nails.  His eyes fixed on the orange sunset heading toward San Francisco, a ray of light sliding into darkness.  And he could only  remember the many times Cool Papa and Dos Pedro sat on their front porch with his brother and told lies all day until that same orange sunset giggled its way over the blank horizon.  But someone said Cool Papa disappeared somewhere in Iraq one day and Dos Pedro refused to say another word to anyone ever again.    He felt his own giggle burn deep in chest.  His breath fluttered short and quick like the flits of hummingbirds.

His breath.  He opened his mouth to find it.  Fear flooded in and shook him.  I’m not afraid, he thought. I’ll never be afraid of them again, if I choose to get through the night, he added.  If I want to…

Very few tried, too many hadn’t.  His brother lay in a pool of blood, a round hole in the back of his neck where the bullet pierced inside.  The white man told the TV cameras that he was afraid of the boy jogging through the street, wearing shorts, tennis shoes and adidas socks, and a Yale University t-shirt, the one saturated with blood when they found him. “I’m no longer afraid of them. The people that carry the debt…”

Harsh thuds along the stairs and hallway, boots shuffling three and four at a time.  Pounding against the wall, ears pressing into empty spaces.  A heavy body crashes against a rickety wooden door.  The Model-T lock falls to the floor.  He pressed his head down into his chest to muzzle laughter or tears.  Down the hall the jangle of doorknobs mingled with grunts and another body heaving against doors.  Someone yelled out, sounding like Little T.J. Johnson with his gravelly voice sawing into the air from outside.

“What y’all gonna do, burn this motherfucker down like ya did in Philadelphia?”

Their voices ricocheted off of worn wood.

“Better think of somethin’…niggers getting restless outside.”

If he squeezed from the tightest space and dashed to the alcove on the second floor, sliding through the secret door, there might be time to do…to do what?  Why think of this now knowing better how this ends, he thought, scrunching himself deeper into himself and imagining his lankiness gliding across victorian rooftops, Carl Lewis strides chipping away at the wood shingles with each step, like his brother had taught him, slide down the side of Mr. Garrett’s raggedy-ass trellis and plant his feet firmly in his eerie weeds.

“Police!  Open up the goddamn door!”  He heard the bellows leak out into the street.  Little TJ kept his saw chopping against their threats, dancing in place while shouting out to Linden Street – “Y’all better not open your goddamn doors!  Hide in the basement and take your brandy with you!  Y’all closed for business today!”

He imagined what they were saying.  Wanted: Black arsonist and shooter on the run/Responsible for the death of many/All whites/He must be stopped/Anyone familiar with the perpetrator, please call your friendly neighborhood race soldiers–

“Shoot the fucking lock off!  Fuck them!”

He dared not think of it. Tortured in an upper attic.  No place to run but through the pillars of hell.  And they’d grind him into the rotting woodwork.  Their vicious talons scratching against concrete, grasping for skin.  The Vase.  The goddamn vase: sketches, maps, thoughtful reminders on half-post it notes: I am human, they are not; I am human, I shall prevail.

He saw it somewhere behind the throbbing in his right eye.  The Vase.  Small.  Elevated.  Sitting among the row of salt and pepper shaker sambos standing erect and service-ready, their pie-eating smiles stretching end to end as if the corners of their animated mouths were latched to each earlobe.  The robust Aunt Mamie cookie jar held the snapshots – thumbnails – of spaces where they felt safest.  And the slip of tracing paper taped to the bottom of Mamie held patterns, lines of horizontals and verticals pointing toward an escape path.

“Catch the light!” one would exclaim.

“Flashlight, Bro!  We’ll draw on our own fire.  Fuck that!” the other one spit back.

“Where’s the attic in this place?”

They’d track in a stench.  It would fill each crevice.  It sought him out and placed a tight grip around his throat.  They’ll find the vase.  They will find him.  The slaps.  The insanity.  The best of himself smashed against the sambos and stale walls.  The best of himself unscathed, perhaps.

They’d ask him if there were others.  Smacking his head against a rusting pipe; they’d demand things ungivable but settle for everything seizable, anything soiled by fiction, anything to consecrate the widespread abuse on Linden Street below.  And would he let them rip the best of himself from himself, drag him from his place unscathed, make him thrust vermintrash into that place, that place where no corruption touched, where in fleeting moments, he stretched out his long arms, reaching for sun rays and spreading all of his life for interrogation?  Could he trust himself?  Was he who he struggled to be for so long?

Fumbling around the secret place where the spirits dwelled and rested.

“This is some voodoo shit here!  What?!  What is this crap?”  Footsteps sloshed along the floor.  The spirits awakened.

“Just find a towel around here.  This is nasty.  Look at my boots!”

More glass shatters to the floor.  Unlit candles, pictures hanging on the closet’s walls ripped and tossed aside.  Small dishes of almonds and dried sardine slapped against the wall.

“These people are goddamn goofballs!

‘Whoa, whoa, Cowboy!  What’s behind here.  Pull that Jesus poster down.  Pull that shit down!”

Would he tell? Would his heart jump into his brain and dance all over it?  Self-taught.  In case of treachery, self-destruct.  He heard the creaky steps and felt the heavy space between them.  The smell they brought with them.  He flicked his head toward a small glob of light leaning into the darkening room from the small windowscape.  Mr. Garrett stood astride it.  Maybe he was the light.  The ghost or the god.  He felt warmth receding from him, so cold in comfort, so near death and another death yet, glowing, glowing red and yellow into black, a last glinting stab of shine around his fading orb.

The attic door flung wide open and a rush blew over his face.  He could hear their grunts ratcheting with excitement.  Closing in.  He would not look up.  He would not look up and meet their wild eyes.  The eyes of the true beast.  Someone was waiting in the dark, his brother, perhaps.  He remembered to count to himself like one step, two steps, three steps…he felt lighter.  He saw Mr. Garrett again scrambling out of the window after stuffing weeds into his mouth so he could rest peacefully.  He grinned before starting his count again…four steps, five steps, six steps.  He felt the heaving beasts hover over what was left.  Seven steps…

Richard Kevin Cartwright is an Oakland playwright, short story writer and soon-to-be novelist.  His playwork is mostly set in Oakland and at various  decades, particularly after the post-World War II movement of Black people to the Bay Area from the South.  He’s written several full-length plays including “The Gilley Room” and “516 Pine Street” about Oakland life, as well as shorter works , “Mother’s Day’ and “04.05.1968”.  He’s currently developing two long-form plays “The Last Tenor From The Land Majestic” and “The California Hotel” that deal with the musical implications of living under racism.  Currently, Richard is  developing a volume of short stories entitled “One-Sixteenth of A Panorama” for 2021. 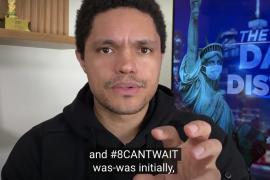 What Does It Mean to Defund or Abolish the Police?
Reconsidering James Baldwin in an Era of #BlackLivesMatter