Summer 2020 marked a significant shift in civil unrest in the United States. With rising unemployment, a global pandemic, an open supreme court justice seat, and increased public around issues of police brutality and state sanctioned violence, this country has been in a state of lamentation. People, especially Black Lives Matter activists, have come to the streets to vocalize collective dissatisfaction with racial and economic inequality in the United States. We are living in a time that calls for revisiting James Baldwin and his blues.

The blues have been a powerful source of activism in the Black community. Baldwin used the blues to show how his pain, and his rejected body was still beautiful and worthy of love even if society called outsiders ugly, criminal and reprobate.  He showed us that the blues were an undeniable source of beauty and truth because of the pain, complexity and longing for change, not despite it. In the style of Baldwin and other blues artists, #BlackLivesMatter activists have been singing the blues for over 100 straight days.

Black Lives Matter was founded in 2013 to address the humanitarian violations against Black people, including the alarming rates of racially motivated violence, especially by the police. As information about police brutality incidents increased despite non-violent protests and demonstrations, I felt repeated moments of rejection from the country I called home and to whom I spent years pledging my allegiance. I experienced betrayal after betrayal when clear acts of racial violence were followed with acquittals and non-indictments. I’ve turned to art, scholarship and activism to understand this pain, turning it into the blues.

By engaging in critical thinking, community organizing and ancestral musical oral traditions, I began to do the work to heal my wounds caused by white supremacy, racialized capitalism and imperialism.  I watched individualist American values fail American citizens during the pandemic as stores were emptied of food, toilet paper and water by hoarders whose behaviors left stores in disarray and many homes in crisis. I witnessed the depth of inequity deepen as Black and Indigenous people disproportionately filled morgues and hospitals, facing the worst prognoses of the coronavirus. I watched in dismay as the economy’s reopening prioritized over the safety and wellness of children, incarcerated people, healthcare workers and more. We collectively watched people die alone in isolation and said goodbye via zoom funerals. I, like many, felt unspeakable pain.

The cry “Black Lives Matter,” is the beginning of my blues song; it is my cry of anguish to whoever could hear me that my communities’ must also matter. “Black Lives Matter” serves as a reminder that despite our collective treatment, Black people deserve to be treated with respect and dignity. We should be able to live life without carrying names upon names of murdered people who could’ve been us, and who should be alive today. The Black Lives Matter movement gave people, including me, a space to lay our blues out on the streets, in art and in scholarship like #ScholarStrike.

I leaned on James Baldwin and his use of blues aesthetics to learn to use my pain in a compelling, beautiful and productive way. In A Queering of Black Theology, EL Kornegay Jr., discusses the ways Baldwin combined the strengths of music with literature to tell the stories of society’s most silenced pain, revealing lessons learned from their unique situations. Baldwin uses fiction to illustrate the pain of those on the margins, rejected by society, rejected by organized religion, rejected by their families.

In Just Above My Head, Arthur, the protagonist, is a gay gospel singer who travels to southern churches to perform.  His identities as a Christian and gay man are in opposition in the eyes of his religious community, but all scrutiny is put to rest when congregants experience his deeply intimate confessions and moving spiritual performances. Baldwin tells us that Arthur “sang and there was something frightening about so deep and unreadable a passion in one so young…his delivery of the song made you realize that he knew what he was talking about.”

Arthur’s theology is not just a theoretical exercise but rather a pedagogical praxis. His utterance “Take me as I am” highlights how society’s norms historically devalue humans who don’t assimilate. Baldwin shifts traditional notions of authority through Arthur’s blues by placing immense power in the hands of a queer, young, Black gospel artist. Arthur uses his voice despite racist, homophobic persecution to speak his truth and everyone who hears him is forever changed.  As I marched through the streets of Tempe, AZ with Black Lives Matter on behalf of Dion Johnson, I remembered the power of Arthur’s voice and I sang my blues.

In Giovanni’s Room, Baldwin reiterates the consequences of assimilation through David, the main character. David silences his sexuality to the world and only confronts his true self inside of his lover, Giovanni’s, dirty little room. While David is able to find love and pleasure in his relationship with Giovanni, his internalized homophobia pushes him to abandons his love and his truth so he can embody virility. His choice to conform and assimilate ultimately leads David to losing his only chance at real intimacy. Here Baldwin reminds us of the material consequences we endure when we choose assimilation over authenticity.

James Baldwin teaches us the art of resistance through the blues by reminding us that despite our complexity, we’re worthy of love and safety, even if it costs a revolution. He showed readers that alternative sources beyond the traditional canon can teach us and make life worth living; sources such as activism, valor, family and authenticity are invaluable sources in pursuit of collective rehumanization.

2020 toppled precedents and transformed the way we understand the world and our connections to other humans. As we try to make sense of our place in history, we know that despite many imperfections, we are worthy. We know that despite our pain, we sing the blues so that there is hope for tomorrow. 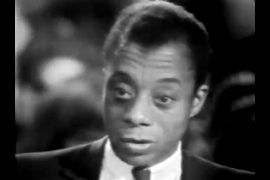