By Dima Khalidi | This article originally appeared on The Hill

Rasmea Odeh is a sixty-seven year old Palestinian-American feminist, activist, educator and community leader who served as the associate director of the Arab American Action Network (AAAN) in Chicago since 2004. For over a decade, Rasmea built unprecedented community support for close to 600 Arab immigrant women; established community-wide education projects for Arab immigrant women; and received the “Outstanding Community Leader Award” from the Chicago Cultural Alliance in 2013. Earlier this year, on October 22, the Department of Homeland Security arrested Rasmea in her home for alleged immigration fraud. Many believe that her arrest is part of an ongoing witch-hunt that targets Arabs and Muslims who criticize U.S. and Israeli policy and labels them as “terrorists” because Rasmea has been demanding justice for Palestinians for most of her life. She, herself, spent time as a political prisoner in Israeli jails in the 1970’s where she was violently tortured and humiliated– despite the international legal prohibition on torture and ill-treatment.

Rasmea Odeh’s trial was surreal – and not just because I grew up knowing her and her story and was jarred seeing her in the defendant’s chair. The attorney representing the U.S. government essentially did Israel’s bidding, painting a Palestinian woman who embodies the Palestinian history of dispossession, struggle and resilience as “dangerous and threatening.” And the judge allowed it.

On Monday, after a four-day trial, a jury found her guilty of immigration fraud after three hours of deliberation. The judge granted the prosecution’s request to take her into custody. She will remain in a Detroit jail until her sentencing on March 10. Her lawyers have vowed to appeal the conviction.

It’s a crushing feeling when, despite the tireless work of a community to expose the injustice behind a prosecution, and the valiant efforts of the defense team, the government relentlessly goes after a woman who has already suffered endlessly at Israel’s hands. The government was able, with the court’s help, to make sure that Rasmea couldn’t tell her full story, and tried to intimidate her supporters from rallying to her defense.

Rasmea, a 67-year-old Palestinian-American leader in her Chicago community, was on trial last week on one charge of unlawful procurement of naturalization. Ten years later, she was prosecuted for allegedly lying on her naturalization application when she did not indicate that she had been arrested, convicted and imprisoned by Israel. Israeli forces arrested Rasmea along with 500 other Palestinians in 1969 following a series of bombings in Tel Aviv and Jerusalem. She was severely tortured – sexually and otherwise – into signing a confession that she was responsible for the bombings. And then she was convicted to two life terms by an Israeli military court – a system that, as her lawyer said, “sits in judgment of Palestinians,” and convicts them at an incomprehensible rate of over 99 percent.

This case was not about lying on an immigration application – that would have been dealt with in immigration court in a couple of hours. Michael Deutsch, Rasmea’s lead attorney from the People’s Law Office in Chicago, asked the jury in his closing statements: “What is this case about? Why is the government using all of these resources to make a criminal out of a woman who has overcome so much suffering, to make a life helping her community?”

But neither Deutsch nor Rasmea herself, when she took the stand the last two days of her trial, were permitted to talk about why the government was bringing this case. The judge had overruled their motion arguing that she was only prosecuted because of her effective community organizing, and because of an ongoing investigation of anti-war activists, including one of her colleagues, for their advocacy of Palestinian rights.

Nor were they allowed to talk in any detail about the suffering that Rasmea has endured. It would seem that the circumstances under which Rasmea was convicted would be relevant to a case accusing her of lying about it. But the judge ruled, and repeatedly admonished throughout the trial, that she was not to talk about her “torture, rape and all that stuff.” That’s how he said it, warning her before she testified that if she brought it up, there would be consequences. He also ruled to bar expert testimony from a woman who works with torture survivors regarding how Rasmea’s PTSD affected her response to questions related to her horrific experience.

Despite the court’s insistence on preventing the exposure of Israel’s torture practices in the courtroom, Rasmea’s story shone through. She took the stand, and confidently, without shame and without fear, spoke to the jury about her life. About how her family fled their village of Lifta in 1948 after hearing about massacres in neighboring villages, expecting to return in a few days; how her large extended family ended up living in tents and cramped living quarters for years; how the Israeli military occupation of the West Bank in 1967 once again displaced them.

She was not permitted to tell the jury what happened in the interrogation center after her 1969 arrest, but her story has been told elsewhere – the severe physical, sexual and psychological torture she endured, some of it in front of her own father. When her attorney asked her if Israel charged her with anything, she said, “Yes. They can put any charges against me. They’re the power.”

As she repeatedly said when asked if she intentionally lied, and as Deutsch noted in closing, “It was well known that she was convicted, and traded [in a prisoner exchange]. The US Embassy knew it, the State Department knew it, and Immigration should have known it.”

Rasmea also spoke about her work in Chicago, how she came to start the Women’s Committee of the Arab American Action Network, now 600 Arab immigrant women strong. Her passion for her work, and her love for the women was palpable. And it was reciprocated by the dozens of women and community members that came from Chicago for days to attend her trial to support her. Outside the courtroom Friday, she told them, “I tried to be strong, and to tell all of your stories too.”

In his closing arguments, Deutsch addressed the jury: “I didn’t get to tell you the full story of Rasmea Odeh, but you got some insight into the life she’s lived and who she is.  You got to know what she’s done in the U.S. It’s important for you to decide whether this woman, who has lived 20 years in the US, is a criminal because she filled out ambiguous forms and didn’t understand all the questions.”

The packed courtroom teared up when he concluded: “It has been one of the great privileges of my long legal career to represent this extraordinary woman of great passion and dignity….You have the bird of justice, the bird of truth, the bird of redemption in your hands. You can throw it down and crush it, or you can let it soar.”

The bird was thrown down Monday, but it cannot be crushed. Rasmea’s supporters were there throughout the trial, and they returned to hear the verdict. They will continue organizing and fighting for her right to be free. It is our job to make sure that her story, and those of countless others who are silenced and bullied, are allowed to be heard, and that individuals who have the courage and dignity to stand for justice know that they are not alone.

The U.S. government has to understand that conducting fishing expeditions targeting Palestinian-American community leaders will not work to intimidate them, but will strengthen the resolution of the diverse movement for Palestinian rights to effect change in U.S. policy on Israel/Palestine.

Dima Khalidi is director of Palestine Solidarity Legal Support (PSLS), and cooperating counsel with the Center for Constitutional Rights. PSLS works to protect the rights of advocates for Palestinian rights in the face of growing repression.

This piece was reprinted by Praxis Center with permission from the author. 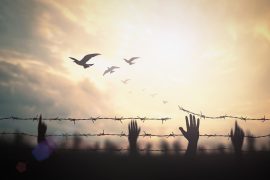 Mass Incarceration in the US
The State of Black Art and Life: A Conversation with Photographer Iris Dawn Parker 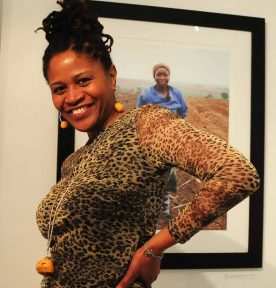