On July 28, 2016, Bresha Meadows, a fourteen-year-old girl, took defensive action to save her family – her mother, her siblings and herself – from her father’s continued abuse. This was not Bresha’s first choice, nor was it her first attempt to end the abuse. Bresha endured trauma until she could do so no longer and she allegedly shot her father.

This was Bresha’s last resort. In her short life, she experienced a long history of domestic violence trauma. Unfortunately, Bresha’s story is not unique and is commonly heard by domestic and interpersonal violence advocates.

In 2011, Bresha’s mother Brandi took her and her siblings to Bresha’s grandmother’s house to get away from her husband, Jonathan Meadows. Brandi filed an order of protection. After Jonathan promised her that there would be no further abuse, she and the children returned to him and Brandi dismissed the order. When they returned home, Bresha and her family were cut off from contact with their extended family, and Brandi was not allowed to go anywhere by herself without Jonathan.

In January 2015, Bresha ran away to an aunt’s house. Jonathan made a police report stating that Bresha had been kidnapped and Bresha was brought back to her abusive home.

In May 2016, Bresha ran away to her other aunt’s house, Martina Latessa, who is a detective in the Cleveland police department. Latessa was forced to return Bresha to her abusive household, but was determined to have Trumbull County Department of Job and Family Services intervene. A social worker was sent to Bresha’s home to interview Brandi and Jonathan. The social worker interviewed the two together and Brandi denied the abuse allegations.

Bresha did everything she was supposed to do to get out of an interpersonal violence situation, and was continuously returned to the place of trauma and abuse. The system, which does not work, especially not for trans and cis-gendered Black women and girls and certainly not for gender non-comforming and non-binary folks, did what it typically does: it failed Bresha, and it failed her in many ways. The police failed her. Family services failed her. Anti-violence organizations failed her. The courts failed, and are currently failing her. Bresha was failed horribly at all turns. And we all are complicit.

So on July 28, 2016, when Bresha was jailed for defending herself, her mother, and her siblings, a number of organizers and activists inserted ourselves into Bresha’s story and timeline to fight for and with her. She is still locked up at Trumbull County Juvenile Detention Center in Warrren, Ohio.

We are determined to see Bresha free.

On August 11, 2016, when Bresha turned 15 years-old alone behind bars, without being able to celebrate or embrace the people who love her, activists lifted up her name and celebrated her.

And on August 30, 2016, when Bresha stood in court with her lawyer only to discover that she was going to stay in jail at least until her next hearing in October, people campaigned to demand the prosecutors drop all charges through letters and #FreeBresha events all around the country.

On October 3, 2016, when people discovered that Bresha was on suicide watch, we dug our heels in deeper to fight for Bresha’s release and we shouted #FreeBresha even louder as we reminded people that jail is not safe for anyone.

On October 5, 2016, when her hearing was rescheduled for a later date, we held events to celebrate her life, speak her name, tell her story, to let people know that Bresha would not be forgotten and would not disappear behind bars.

Today, we continue that fight.

Thankfully, Bresha has many fierce freedom fighters from multiple groups standing up for her including #Survived and Punished, Free Marissa Now, Lifted Voices, Love & Protect, Mahoning Valley Organizing Collaborative, Ohio Organizing Collective, her family, and many others who are determined to see her free.

We do not believe children should be caged. We will not and do not stand for the criminalization of trans and cis-gendered black women and girls. We do not stand for the criminalization of interpersonal violence survivors. We fight for their survival. We fight for their right to survive. We fight for the right to defend ourselves against interpersonal and state violence.  We celebrate their survival. We believe in justice. We believe in freedom. We will not rest. #FreeBresha.

Please join the “Open Letter to Dennis Watkins” project. Dennis Watkins is the prosecutor who has the discretion to decide to drop charges against Bresha and to release her. Or please write to Bresha herself.

Read Deana’s open letter to Bresha on the night before her scheduled hearing. 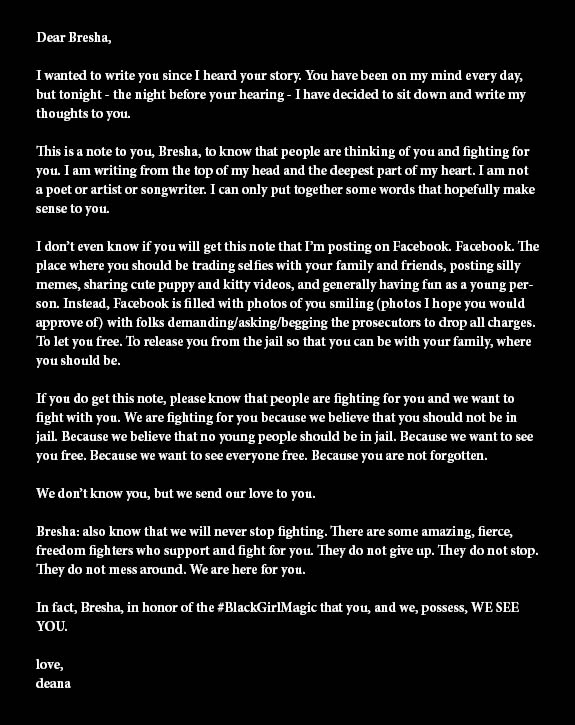 Deana Lewis is a member of Love & Protect, a volunteer organization that supports those who identify as women, gender non-conforming, and non-binary people of color who have defended themselves against interpersonal violence (IPV) only to be punished by the state. Deana is also graduate student in the Educational Policy Studies Department at the University of Illinois at Chicago (UIC). Her research is on Black girls’ experiences within the school/prison nexus and how their experiences have been left out of discourses about youth incarceration in general.

Strategies of Resistance: Battling against Environmental Racism and for Environmental Justice
Breaking Silence: A Hearing on Girls of Color