Cara Roberts graduated from The School of the Museum of Fine Arts, Boston in affiliation with Tufts University in 2004. She graduated with the Pegasus Prize and the Dana Pond Award which were two of the highest accolades to be received. Her artistic education did not start there however, she attended The School for Creative and Performing Arts high school in Cincinnati, Ohio where she attended grades 7 through 12.  She earned a Yale interview after graduating from Tufts but did not pursue it any further.

After college she returned to her hometown of Cincinnati and worked as a studio artist and supported herself working at a small interior design firm.  Shortly after returning she married a military officer and moved around the states.  Currently, she has a studio in downtown Philadelphia.

Much of her work is autobiographical in the sense that she uses herself for imagery and as the eyes to view culture.  Sharing the experiences she has had growing up as a biracial child in a race that was not her own informs much of her work.  She has had many surreal experiences from being the “invisible” person in the room, having a position as a biracial woman gives her a special insight into the evolution of America.  Cara realizes that she has a special place in this conversation and is interested in how color and race coexist, she believes there is a rainbow being formed out there.  The influence that media has on race and social boundaries fascinates her and drives her to continue the conversation that she has in her work. She includes the desires that absence and imagination bring to her within this and shows us her view of it all.

My work is influenced by the assignment of race and gender, and the discovery of my relationship to races that have been socially assigned to me. Due to being raised in a race not completely fitting with the way I appeared, I was very protected from race and racism.  I also did not have anyone to share with me the values of the race in which I appeared to belong.

In high school I finally was integrated into an environment where what your race was mattered,  the experience was surreal and painful.  This is where my artwork is rooted.  The experiences of my life from this point forward inform my work.

I became very concerned with blackness.  I needed to survive in my newly assigned culture group and try to stay ahead of the bullying.  I turned to media and magazines to find information on black culture and how I was supposed to behave as a Black female.  In all the media it was very clear that “black” was different from what I was.  I was interested and became obsessed with understanding my newfound identity.

The black figure performing throughout history, in various spaces interested me, especially as a form of capitalization.  As history, progressed women made more of a central figure in the commercial world.  The female form has a long history of commodification at the root for the black figure stands the historical “Venus of Hottentot.” Now in the 21st century, the position  has been opened to almost all women regardless of race.

The commercialization of the female figure has evolved through time but blackness has a history of being fetishized.  I read Foucault to understand more about the structures of power and fetish.  I began to draw connections between the magazines I was looking at and these power structures. In real time the power that came with the feminine and sexual images were flipping, and I adopted his “Grid of Intelligibility” as a visual component in my work.

I explore how the fetishization of blackness and the female figure are evolving.  I feel that my position as a bi-racial woman lets me take a special look at this evolution.  I see both sides and it is an eye-opening position to be in.  It also lets me explore how color effects race.

My use of color, light and gradient explores the positive and negative aspects of the use of language around race and color.  It also touches on spirituality and what type of hierarchy color can inform. I hope to start conversations about color, gender and the evolution of where it is all going. 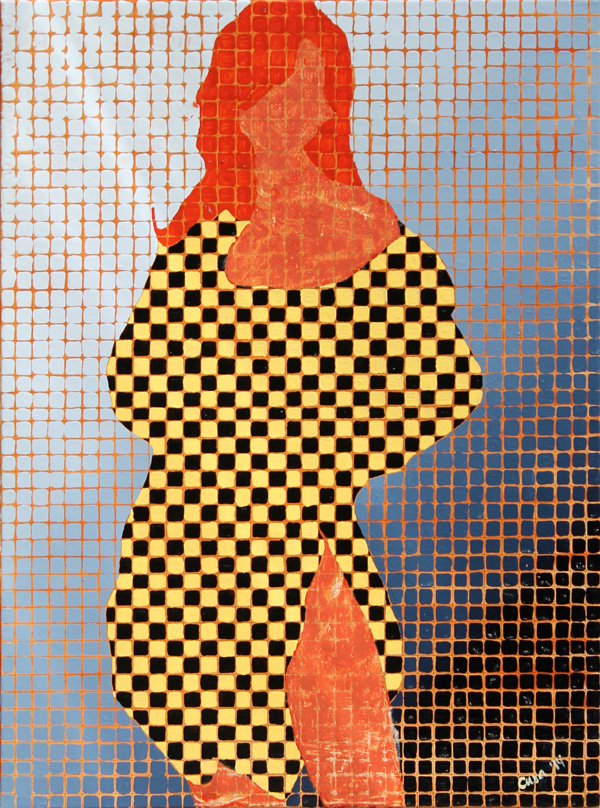 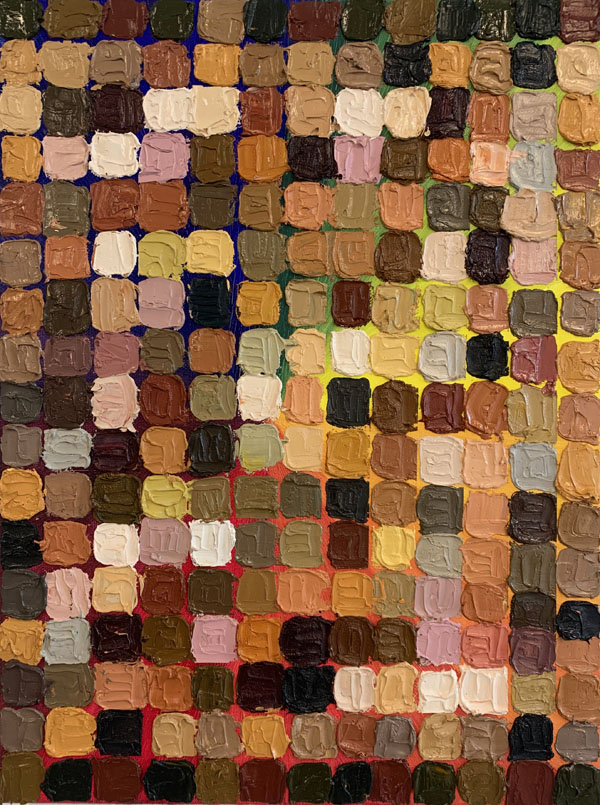 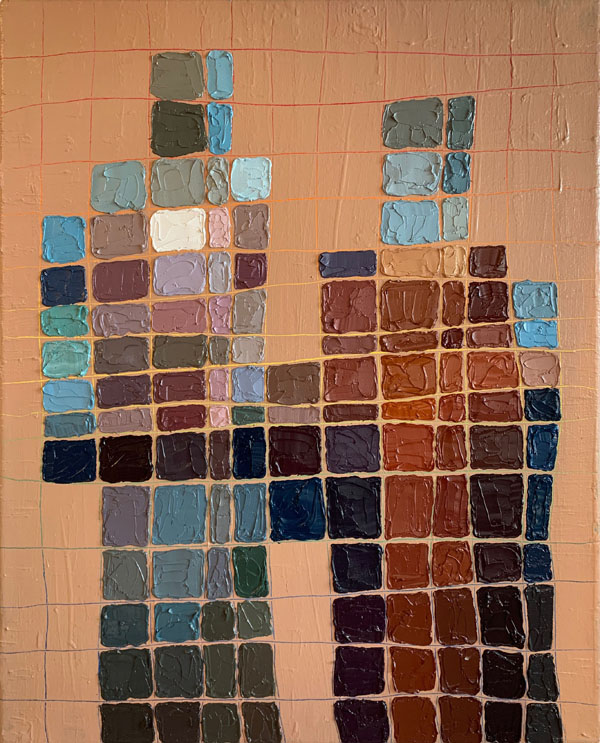 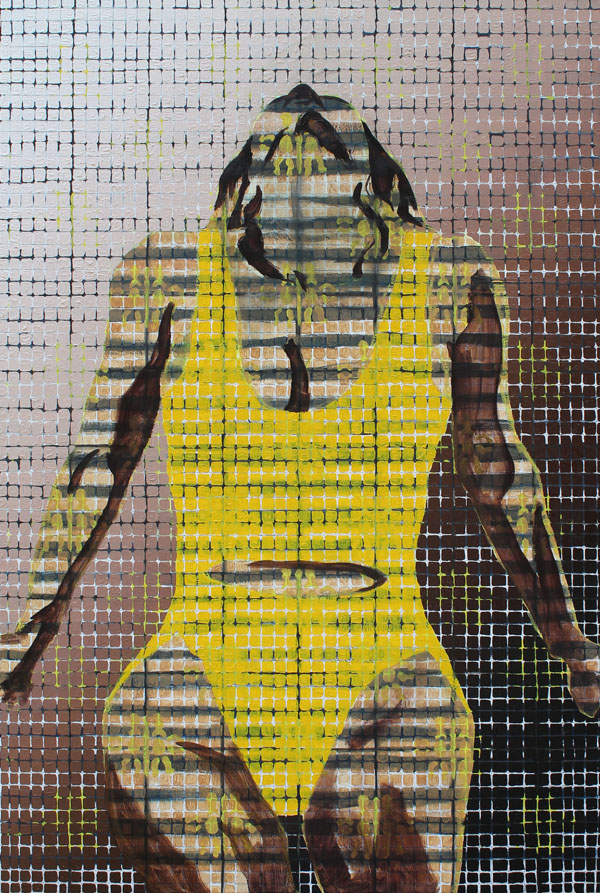 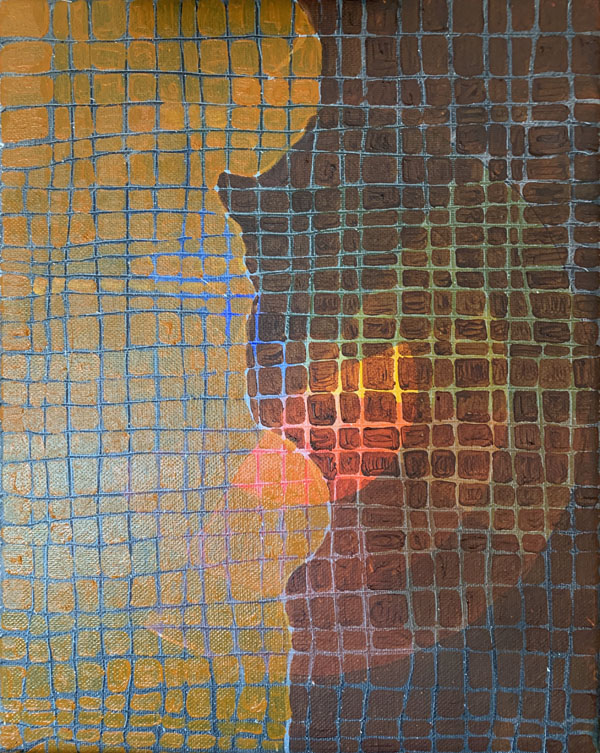 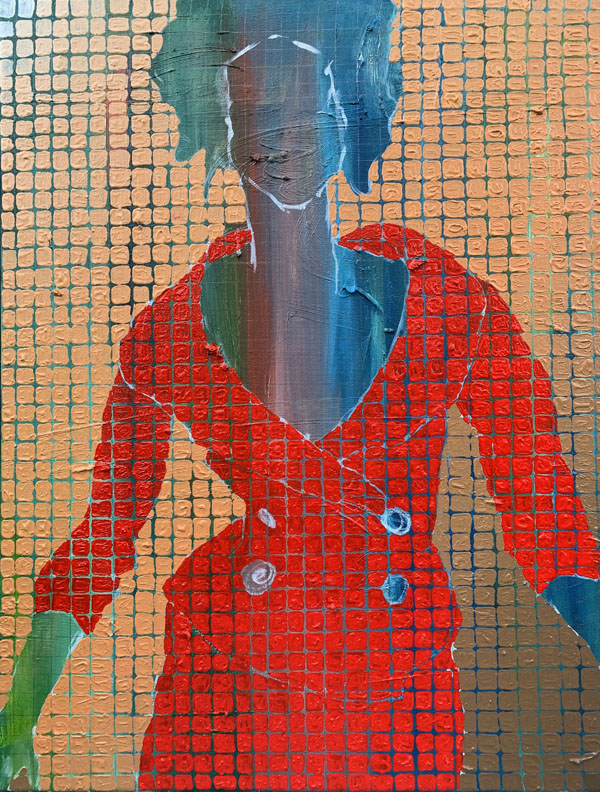 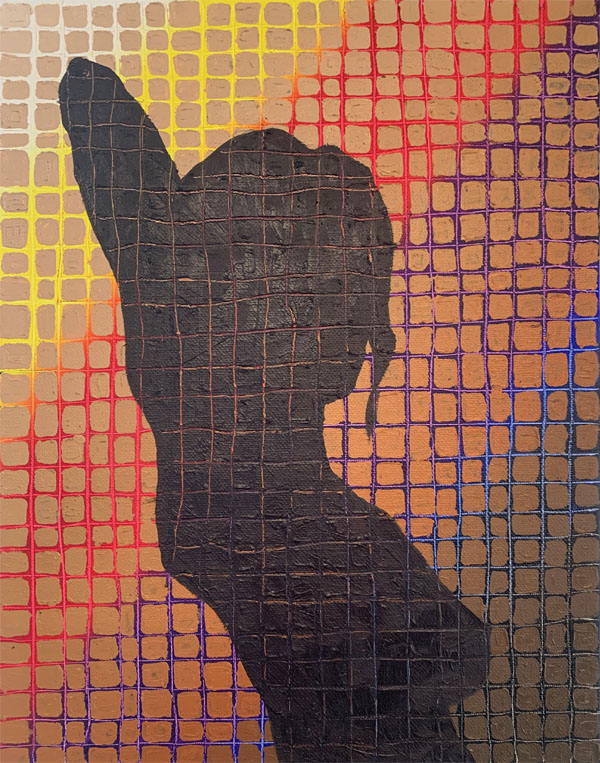 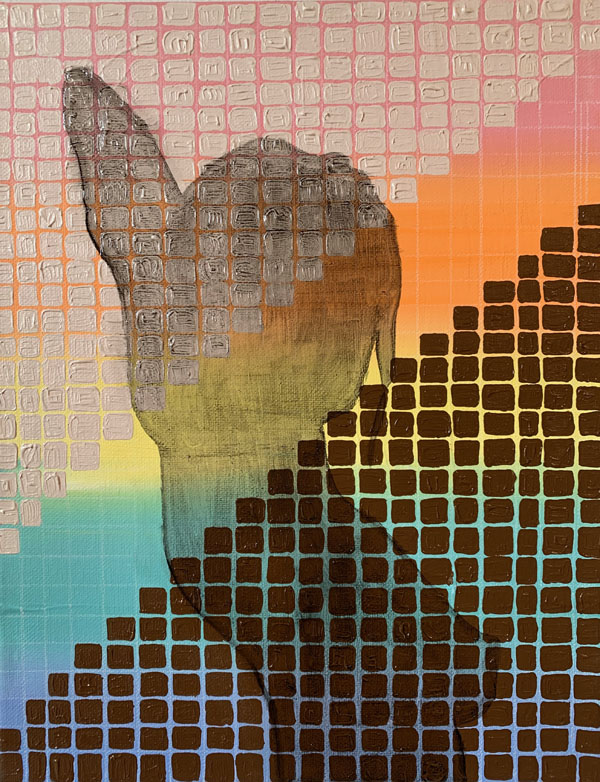 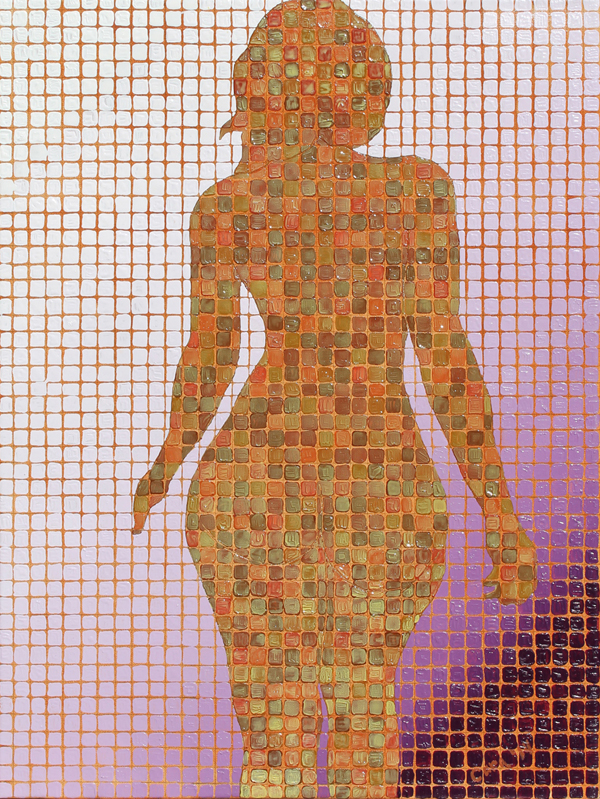 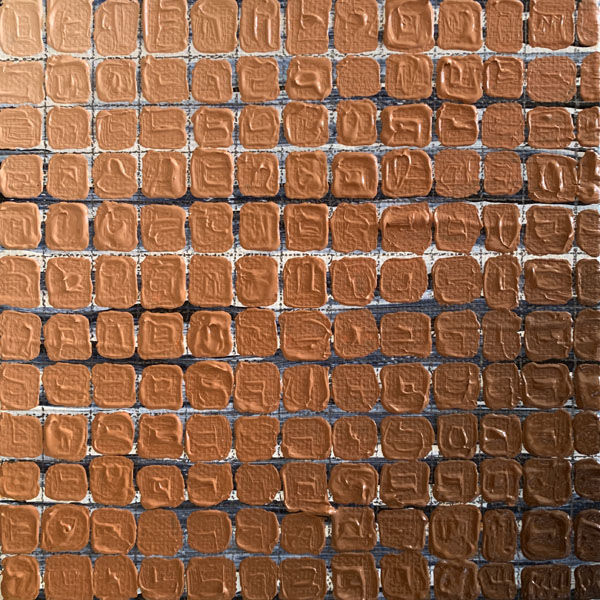 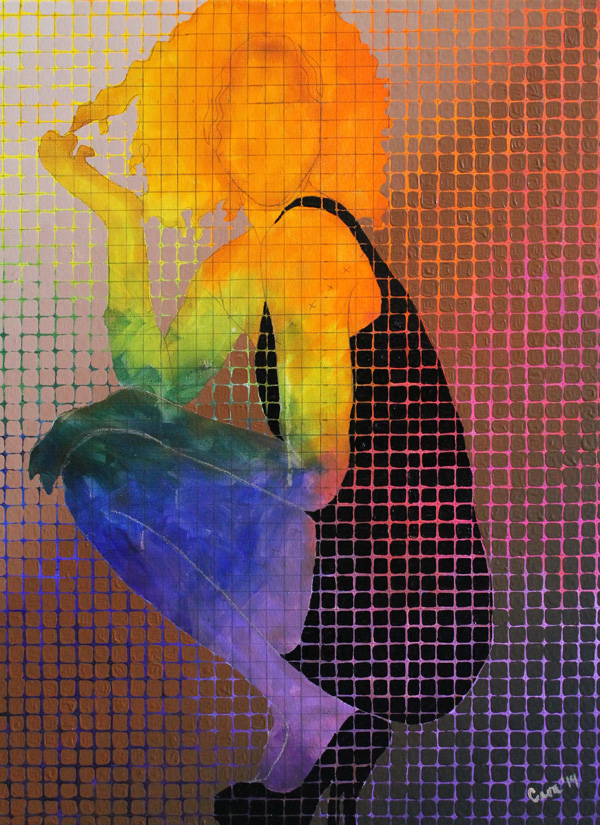 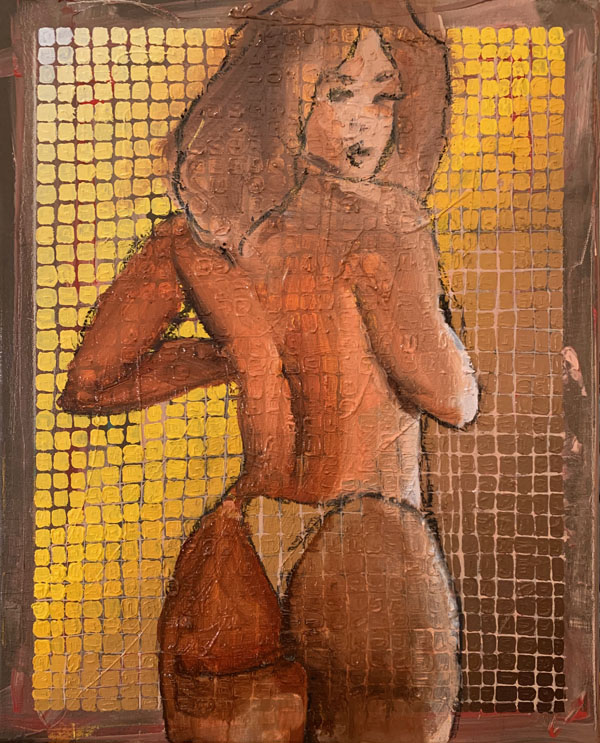 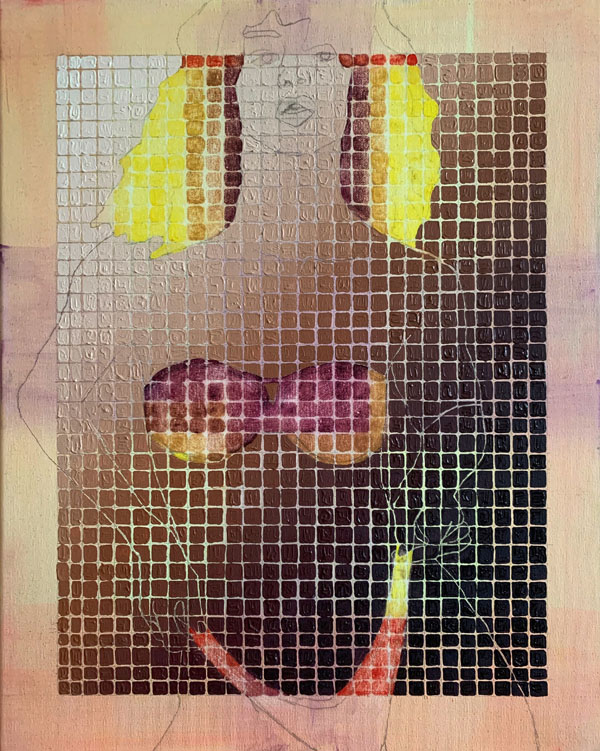 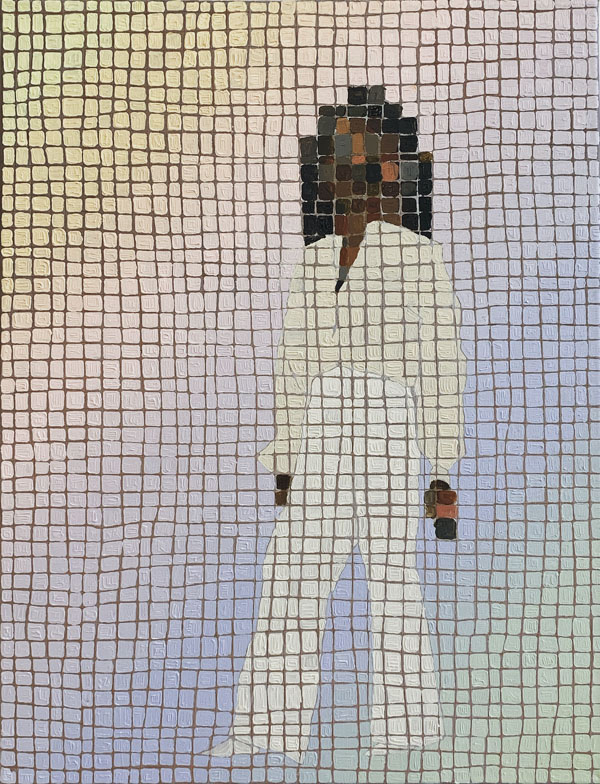