Writer, educator, activist and long-time resident of Chicago’s Hyde Park community, Bill Ayers recently recorded a one-hour audio walking tour of his neighborhood for the mobile application VoiceMap. “I had a lot of fun doing it,” Ayers said, “working to figure out how to make a short walk meaningful and how to engage visitors in something more than a superficial tourist trip.” Praxis Center features an interview with Ayers about the power of storytelling and his experience creating an audio tour of his neighborhood by travel writer Claire van den Heever.

Claire van den Heever: Were you surprised by how starting out with a map influenced the stories you ended up telling?

Bill Ayers: I was delighted, actually, by how quickly the presence of the map, as well as the act of walking through the physical spaces, required me to tighten my focus. I immediately deployed a discipline I typically resist: the discipline of concision. It’s like being asked to write a six-word memoir, or to tell your life story to an interviewer in sixty seconds, or to compose your epitaph for the narrow grave marker looming up ahead—it can be done, to be sure, but there’s no room for fluffing around, revving your engines, or clearing your throat. Instead of staring at a terrifying blank screen with its daunting infinity of possible pathways forward, I had the map—simultaneously constraining and liberating. The storyteller with a map must cut the bullshit at once—and speak!

As a storyteller, what do you gain by knowing exactly where your audience is at any given moment?

The best storytelling illuminates the common human experience by way of this specific event or that singular crisis, this three-dimensional character or that precise person. The universal is revealed through the particular, and it never works the other way round. It’s useful, then, to be on a definite street in a notable spot—the more detail one takes in, the more one sees what is actually there to be seen, the more powerful the meanings one can construct and take away from the encounter.

Which of the stories in your tour do you think benefits most from being told on site?

Each story is enriched and grounded when walkers employ all five of their senses (yes, even taste!!) in an attempt to fully apprehend what they find before them. I might write a rich and thick description of the Prairie School of Architecture, for example, hoping to evoke that revolutionary style in other minds, but there is something special about touching Robie House, listening to the birds in the branches above, smelling the lake, and feeling the air sweeping off the prairie on a mission of change; I can describe Washington Park in its manifold glorious detail, resurrecting the ghosts that inhabit the place as best I can, but as a living urban space, walkers will see something new and idiosyncratic with each visit and from every different angle of regard.

But, OK, which story benefits most? Perhaps being in the presence of Henry Moore’s provocative “Nuclear Energy”—at the site of the first human-made, self-sustaining nuclear reaction—is essential, and perhaps that story benefits most from being told on site. I’ve rarely visited the sculpture without encountering Japanese tourists standing in quiet witness and silent contemplation.

Why did you decide to include excerpts from an interview with your friend Tim Black?

I wanted to gesture toward multiple voices and various perspectives—like everyone else I’m simultaneously the one of one and one of the many. My view and standpoint is not every view or standpoint; my experience and interpretation is in no way authoritative. I thought of several ways to underline that point and undermine my authorial dependability, including inviting a couple of journalists to contradict my narrative explicitly, but in the end I decided that Tim Black embodied much of what I was highlighting—the need for patience as well as urgency in working toward justice, the wisdom of old age and the passion of youth, the sense of being a work-in-progress swirling through the vortex of history, the importance of tempering commitment with doubt and free inquiry with skepticism. Tim is also a delightful human being, a neighborhood character, a loyal friend, and an inveterate raconteur.

You finish off with Nelson Algren’s poem, “Chicago: City on the Make.” To what extent does this poem reflect how you feel about the state of American society today?

The brief excerpt from Algren’s book-length salute to the city captures so much about the state of the nation—conflict and contradiction, progress and reaction, greed and generosity, narcissism and sisterhood, idealism and cynicism. Most important the piece represents a politics of hope, a sense that the public square is always a contested space and that nothing is predetermined or absolutely certain. Algren invites us to dive into the wreckage and play the game with energy.

Because the outcome is far from certain, what we do or fail to do can make all the difference, but we must never quit, never stop playing the game. Choosing hopefulness is holding out the possibility of change. It’s living with one foot in the mud and muck of the world as it is, while another foot strides forward toward a world that could be. We can choose to see life as infused with the capacity to cherish happiness, to respect evidence and argument and reason, to uphold integrity, and to imagine a world more loving, more peaceful, more joyous and more just than the one we were given—and we should.

Of course we live in dark times, and some of us inhabit even darker places, and, yes, we act mostly in the dark. But we are never freer than when we shake ourselves free and refuse to see the situation or the world before us as the absolute end of the matter. Hope is the capacity to notice or invent alternatives, and then to do something about it, to get busy in projects of repair. I have a T-shirt that reads: “Depressed? Maybe it’s political.”

Is there value today in young American activists taking a similar path to the one you took in the sixties and seventies? Why?

The path I took then is the path I’m still on now—it’s a path in pursuit of a world powered by love and reaching toward joy and justice. I’m not a tactician, so I would never suggest pursuing a narrow tactical agenda from 40 years ago, and I’m not nostalgic for a ship that’s already left the shore—times change, and the demands of one moment are ill-suited to another. But, yes, I urge everyone to pursue the path of peace and love, joy and justice.

And we ought to remember that imagination is our most formidable and unyielding ally in that work—it’s the people’s common asset, an endowment to each one, and the indispensable weapon of the powerless. Yes, the rich and powerful control the massive military-industrial complex, the sophisticated surveillance systems, the prison cells, and the organized propaganda—and these are on constant display as if to remind us every minute that there is no hope of a world without the instruments of death and oppression—and we have only our minds, our desires, and our dreams.

And, yes, in a fixed war or a traditional conflict we are finished before we start. But it’s also true that there’s no power on earth stronger than the imagination unleashed and the human soul on fire. Irregular combat—guerrilla struggle—pits our free imaginations against the still-born and stunted imaginations of the war-makers and the mercenaries, and in that conflict we can win.

The future is entirely unknown and unknowable; optimism, then, is simply idle dreaming, while pessimism is no more than a dreary turn of mind—they are twins, two sides of the same deterministic coin—both optimists and pessimists delude themselves into thinking they know for sure what’s coming. They don’t; no one does. The day before Rosa Parks sat down on that bus, Jim Crow was immutable; the day after, the Third American Revolution was unstoppable. The day before John Brown’s assault on Harper’s Ferry, the end of slavery was impossible; the day after, abolition was inevitable. The day before the Zapatistas declared themselves free from their small base in the Mexican state of Chiapas, the idea of a peasant and indigenous-led civil resistance was unthinkable; now it is a model for actions across the globe. And had I been asked my advice on the day before Occupy Wall Street set up those tents, I’d have said it won’t be effective; on the day after I dived in head-first. 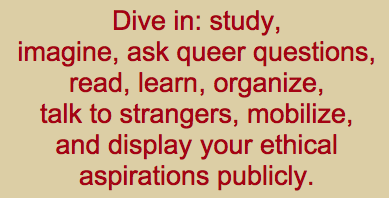 The planet is as it is—a mass of contradictions and tragedies; rich with beauty and human accomplishment, vicious with human denial; an organism that drains us and replenishes us at the same time, gives us life and kills us—and it’s asking us to dive in: study, imagine, ask queer questions, read, learn, organize, talk to strangers, mobilize, and display your ethical aspirations publicly. Turn out all the lights and ignite a small candle in any corner of the room. That little light held aloft anywhere challenges the darkness everywhere. One candle.

We can always do something, and something is where we begin. The tools are everywhere—humor and art, protest and spectacle, the quiet, patient intervention and the angry and urgent thrust—and the rhythm of and recipe for activism is always the same: we open our eyes and look unblinkingly at the immense and dynamic world we find before us; we allow ourselves to be astonished by the beauty and horrified at the suffering all around us; we organize ourselves, link hands with others, dive in, speak up, and act out; we doubt that our efforts have made any important difference whatsoever, and so we rethink, recalibrate, look again, and dive in once more.

The great rebel Rosa Luxemburg, jailed for her opposition to World War I, lived her life to that rhythm. She sent a letter from prison to a friend and comrade who’d complained to her that their revolutionary work was suffering terribly without Luxemburg’s day-to-day leadership. First, Red Rosa wrote, stop whining—excellent advice in any circumstance. She went on to urge her friend to be more of a mensch. Oh, I can’t define mensch for you, she said (although you can Google it—it’s Yiddish), but what I mean is that you should strive to be a person who loves your own life enough to appreciate the sunset and the sunrise, to enjoy a bottle of wine over dinner with friends, or to take a walk by the sea.

But you must also love the world enough to put your shoulder on history’s great wheel when history demands it. Working that out may become for each and all of us a collective daily challenge—it’s also the way forward toward commitment and balance. Choose life; choose possibility; choose rebellion and revolution.

Bill Ayers is a retired Distinguished Professor of Education and Senior University Scholar at the University of Illinois at Chicago. His books include Public Enemy: Confessions of an American Dissident, with Ryan Alexander-Tanner To Teach: The Journey in Comics, with Bernardine Dohrn Race Course: Against White Supremacy, with Rick Ayers Teaching the Taboo: Courage and Imagination in the Classroom, and A Kind and Just Parent: The Children of Juvenile Court.

Claire van den Heever is a Mandarin speaker, journalist and travel writer who is once again based in South Africa after eight years in Asia. For more about Claire, visit her online portfolio, her LinkedIn profile or her blog, South African on China.