We write out of our shared concern over the current Zika virus epidemic in Puerto Rico and the Caribbean in the hopes of making useful interventions. Because of Zika’s adverse effect on fetal development and potential link to Guillan-Barré syndrome, the virus poses serious concerns for public health. The World Health Organization declared a Public Health Emergency in Brazil following the outbreak of microcephaly and Guillain-Barré syndrome cases, strongly suspected to be associated with Zika. 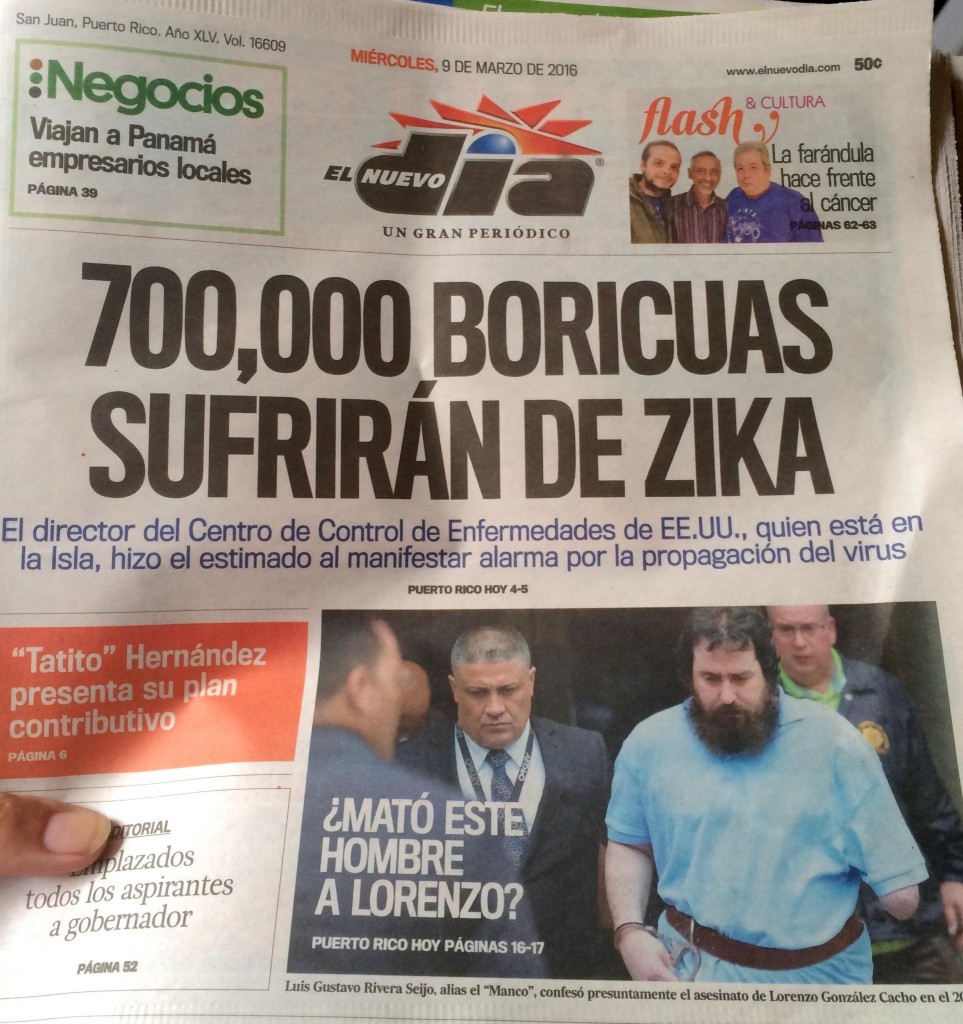 Puerto Rico is already in a state of political-economic emergency, while burdened with a preexisting Chinkungunya epidemic, as well as endemic Dengue virus. All three viruses share the same mosquito vector, Aedes aegypti. In late January 2016 an influenza epidemic was also declared on the island.

Because the main vector is an anthropophilic (domestic) mosquito, well adapted to the human made environment in areas where there are multiple opportunities for water to collect, we find the issue of access to clean water and waste management (especially plastic) to be of great urgency and importance in containing viral spread. We call on the government, as well as agricultural corporations and water-intensive industries in Puerto Rico to share responsibility for the ecologically sustainable restructuring and management of the public water systems, especially in view of the historic drought of 2015 on the island, during which Puerto Ricans suffered unprecedented water shortages for several months. The possibility of a similar drought this year threatens to further exacerbate local health conditions.

The potential for negative effects on the population, especially women and fetuses, highlights the urgency of improved access to and funding for public health. Since the virus can be sexually transmitted, reproductive health services offering multiple forms of contraception (i.e., including, but not limited to condoms), prenatal diagnostics, pediatric care, and abortion services are necessary. Despite the Pope Francis’ more liberal views, locally the Catholic Church has condemned the Centers for Disease Control and Prevention (CDC)’s recommendation that people use condoms during sexual intercourse to prevent Zika transmission. This has clear implications for Catholics who may be put at risk of infection by not using proper treatment. Access to and informed use of birth control, as well as reproductive and natal care should be strengthened for Puerto Ricans. People’s right to such access should be supported, and coercive public policy, as well as stigmatizing discourses avoided.

The implications of a Zika epidemic are onerous for public health, considering that Puerto Rico is structurally under-resourced due to the existing cap on congressional spending for health services on the island. This issue has been in the news due to congressional hearings on the fiscal crisis on the island, but no action has been taken to ameliorate the negative consequences of the situation with regards to public health care, which has rightfully been called a humanitarian crisis.

We wish to highlight the absolute necessity of updating the water distribution and treatment system in Puerto Rico, especially under the prospect of the imposition of a control board like the one imposed on Flint, Michigan. In that context, we insist on the protection of the local aquifers and watersheds as central to the control of Zika virus and its epidemiology on the island. We call for a response to Zika in Puerto Rico that accounts for the structural inequalities in health care that exist on the island and moves towards remediating the viral exposure now present.

By the same token, we wish to express concern over the possibility of the presence of high levels of toxic chemicals, including insecticides and experimental agents released by private companies such as Monsanto and Dupont, among others present on the island. We express concern over whatever products are being routinely used in the ecosystem, with which Zika or Aedes aegypti may be interacting and we call for accountability to the residents of Puerto Rico. Further, we call for the full disclosure of any transgenic organisms employed in control efforts.

News reports mention that the CDC is studying the possibility that some Aedes agyptae mosquitos have demonstrated tolerance for insecticides, and we call for public disclosure of any information about the usefulness of various insecticidal agents in use, under consideration for use, or having been shown to effectively prevent mosquito bites, especially for safe use by pregnant women (“Puerto Rico Braces for Wave of Mosquito-Borne Zika Virus,” by Danica Coto, AP). Excessive reliance on spraying insecticides as a mosquito control measure may do more harm than good by encouraging viral resistance.

Furthermore, we as a group of experts on the region call on the US federal government and the CDC to do more than just conduct experiments and issue recommendations with regards to Zika virus in Puerto Rico. The United States has responsibilities to Puerto Rico beyond using the island as a live laboratory. Zika in Puerto Rico is more than just a threat to US public health on the continent. Puerto Rican lives matter. Public health authorities must actively assist the population, and support Zika prevention efforts in Puerto Rico. Immediate actions include: provide and install window screens in homes and businesses, assist in water systems management, and distribute vector surveillance and control strategies. In particular, public health authorities can assist with disposing of any waste that might collect water in order to minimize mosquito populations.

The CDC has a Dengue station headquarters in San Juan, PR and should use that station as a base to conduct Zika prevention and mosquito mitigation campaigns. All prevention and research activities on the island should follow the principles of open access and collaboration appropriate for a public health emergency (A plea for open science on Zika and Zika Open, Vogel, Science Mag). Furthermore, given the strongly suspected association between Zika, microcephaly, and Guillain-Barré syndrome, the CDC should be on high alert for these cases in Puerto Rico and prepared to deal with these diseases as they arise.

Finally, care and support must be provided to pregnant women and their families who have or will experience Zika infection, instead of burdening them with the cost of public health measures. Puerto Rico birth outcomes have been worsening since the advent of the economic crisis. The infant mortality rate climbed to 9.5 per 1000 live births for 2012 (Departamento de Salud, Informe de Salud en Puerto Rico, 2014). This burden is exacerbated by the large number of health professionals that have recently emigrated from the island.

It is imperative that the Medicaid cap be removed for the island and resources mobilized immediately to fight this public health emergency, particularly in terms of prenatal and reproductive health care. Prevention of transmission, expanded medical care, reproductive rights, and long term sustainability of the water infrastructure should be the priorities, beyond the tourist and hotel areas. We call for assistance to local initiatives and support for already existing community structures, and affirm Puerto Rico’s right to defend the health of its population.

This essay was originally published on Savage Minds on 15 March 2016.

Coming Out To Immigrant Parents
A Storied Neighborhood, Wrapped in Contradiction