Despite having ratified the Convention on the Elimination of all Forms of Discrimination Against Women (CEDAW) on July 22, 1997, Myanmar routinely commits gross human rights violations and abuses against Rohingya women and girls. The OHCHR reports estimated 52 percent of women interviewed in refugee camps in Bangladesh reported being a survivor of rape or had experienced other forms of sexual violence committed by the Myanmar military. The Human Rights Council recently concluded that based on the widespread scale of sexual violence, brutality, and the systematic nature of these violations in Myanmar, that rape and sexual violence were part of a deliberate strategy by the Tatmadaw military and police to intimidate, terrorize, and punish civilians.

Desperate to escape targeted ethnic violence in Myanmar, many Rohingya underwent the arduous journey to reach safety in neighboring Bangladesh. Today over 911,000 individuals have fled to the district of Cox’s Bazar near the Myanmar-Bangladesh border, of those, 52 percent are female. According to a recent report by UN Women, almost every Rohingya woman in refugee camps in the district of Cox’s Bazar is either a rape survivor or has witnessed incidents of sexual violence.  What is troubling, however, is that instead of finding safety in refugee camps, many women continue to face an increased likelihood of experiencing sexual and gender-based violence, including domestic and intimate partner violence. Rohingya women and girls also encounter an increased risk of being forced into coping mechanisms such as survival sex, forced marriage, and sex work due to the lack of appropriate economic opportunities in combination with the overcrowding and the unsafe living conditions in refugee camps.

The UN reports that women and girls are also vulnerable to sexual exploitation and trafficking within the refugee camps as women report regular incidents of their tarpaulins being slit at night and their daughters being snatched from tents. While hundreds of sexual violence incidents are reported weekly by Rohingya women and girls, the response by the international humanitarian community in Bangladesh is limited due to inappropriate case management, a lack of adequate resources, poorly equipped health facilities, and chaotic, inconsistent reproductive health services. Some of the shortcomings in the response to sexual violence are due to a lack of funding for programs that would address the large-scale rapid onset of the Rohingya crisis.

Several human rights organizations and victim advocates have begun to make efforts to fill the gap of resources within the camps and address the issue of sexual and gender-based violence. International organizations and NGOs such as Building Resources Across Communities (BRAC), the United Nations Population Fund (UNFPA), the International Organization of Migration (IOM), the International Rescue Committee (IRC), and Doctors Without Borders (MSF) have established a strong network of support programs, health clinics, and women-friendly spaces, leading to improved safety and security in refugee camps throughout Cox’s Bazar. Collectively these organizations are providing mental health counseling to victims of sexual and other violent trauma, hygiene kits, therapeutic nutrition and supplements, and shelter provisions for women and unaccompanied children.

Whilst these organizations have designed programs that provide psychosocial support and the means for response and prevention, what is lacking are the tools and capacities to empower women to speak out on their own, thereby creating potentially long-term social change from within the camps. Despite the challenges, many Rohingya women have begun to rise up and speak out. “Amid the displacement there is support, hope, healing and resilience. Women are emerging as front-line responders. From volunteers to caseworkers and midwives, women are taking care of women,” (UNFPA, 2017). Two women who exemplify the resiliency of Rohingya refugees are Monowala and Leila. Monowala, having been displaced from her home in Myanmar due to violence, was already living in the Cox’s Bazar region when the huge influx of Rohingya refugees came into the camps. Her impact has been in educating women and girls about medical care and safe places to seek aid for the violence they have experienced. In an interview with UNFPA, Monowala says, “women understand when they come here [UNFPA’s women-friendly spaces] there is no financial support offered. They say what we offer is worth so much more.” Leila, who is also a Rohingya refugee, has been a vital resource for Rohingya women in the makeshift settlement of Leda (Cox’s Bazar, Bangladesh). Her counseling and support services are changing lives and demonstrating the impact of grassroots advocacy. Social initiatives like these, that are centered around women’s empowerment and led by women, will have a greater impact on creating lasting change.

These grassroots movements can be strengthened for the benefit of their communities with the support of global communities. Rohingya women have suffered horrendous sexual violence at the hands of their own government as well as in refugee camps in Bangladesh, where they hoped for safety. In order to reduce sexual violence against Rohingya women and girls, the issue must be addressed both through international policy reform as well as through grassroots social movements that can spark transformative change from within the camps. NGOs and civil society, in particular, need to support women-led social movements and work with victims to raise awareness and shed light on this ongoing crisis. A comprehensive and multi-sectoral response to sexual violence is needed. Women-led social movements must be at the table, not just on the menu—thus, they must be an integral part of the solution. NGOs must ensure that Rohingya women’s voices and perspectives are included on a policy level and that social movements and victim advocates are adequately funded. NGOs must prioritize woman-created, woman-led programming as a matter of urgency. NGOs should also establish flexible funds for victim support, through which victims can receive comprehensive and holistic support that recognizes health at a community and social level. Advocacy efforts can enable civil society to ensure those responsible for the injustices are held accountable.

It is time to begin to rethink global justice funding beyond just the response to urgent humanitarian needs. In-kind donations such as food, basic shelter, dignity kits, and sanitary supplies are important contributions to minimize the suffering of refugee women. However, a shift in the power dynamic is a key path forward to ending the ongoing cycle of violence. Women-led movements may be the best way to create transformative change. Refugees in camps today are given little power and agency, and are often forced into a “dependency on handouts.” It is critical to restore self-worth to the deficient refugee system. By empowering women to create change that is beneficial to them in their specific contexts, then long-term transformative change will be possible.

Robin Elizabeth Burke Al-haddad is a researcher and Data Analyst at TANGO International. She has over 12 years of experience working for international humanitarian organizations and holds a Master of Legal Studies and a Master’s of Development Practice from the University of Arizona.

Gatjeak Gew is a Matching Grant Program Manager with Arizona Immigrant and Refugee Services. A former refugee from South Sudan who migrated to the US in the mid-1990s to escape war, he holds a Bachelor of Science degree in Biology and is completing a Master of Arts in Human Rights Practice at the University of Arizona.

Michelle Rose Schatz has experience working with refugees, asylum seekers and other migrants, including with the International Rescue Committee. She holds a Master’s of Development Practice from the University of Arizona. 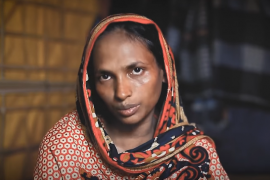