By Patrisse Cullors and Mike de la Rocha There was a lot of conversation happening about Trump’s endorsement of The FIRST STEP Act (H.R. 5682) prior to the bill being signed into law. Many progressive supporters of the Act were surprised that Trump would endorse political policy that they thought would ultimately get thousands of people out of prison. A closer look reveals the truth: The FIRST STEP Act is a flawed and extremely harmful law that was framed as a step forward for criminal justice reform, but in reality it’s a misguided attack on the movement to end mass incarceration. Our concerns with The FIRST STEP Act are based upon three fundamental premises: The belief in the humanity of every person impacted by the justice system; The belief that the Act does not go far enough in addressing the systemic issues that are the driving factors of mass incarceration,…

https://www.youtube.com/watch?v=FUrKYvseGUI A major criminal justice reform bill is poised to become law after the U.S. House of Representatives overwhelmingly voted in its favor Thursday. The First Step Act, passed in the Senate earlier this week with an 87-12 vote, would roll back sentences for federal prisoners, including mandatory life terms for third-time offenders and mandatory sentences for nonviolent drug users. It has been endorsed by a wide range of supporters across the political spectrum, from the American Civil Liberties Union to the conservative Koch brothers. But the bill explicitly excludes immigrants and has been criticized by groups such as the Movement for Black Lives, a coalition of more than 150 black-led organizations, for encouraging profiteering and making “false promises” about bringing black prisoners home.

https://www.youtube.com/watch?v=EhObhSenc5s Angela Davis and Michelle Alexander take part in a panel discussion on the issue of mass incarceration at Riverside Church in New York City on September 14, 2012. They answer the questions: what is the problem of mass incarceration and what does it say about the United States society?

The terror that any family member – especially a member of a Black family – endures when discovering their loved one has been captured by an unjust criminal legal system is horrifying. My turn came when I discovered that my baby brother – my beautiful, incredible, sweet, smart, loving, brilliant baby brother, Akinola Gonzalez – had been arrested on his campus at Hinds Community College where he is studying engineering in Raymond, Mississippi. I called my mother immediately. Her voice sounded so worried, at times so powerless, so frantic … so exhausted. Our worst nightmare, being forced to face our inability to protect him and keep him safe, was happening. Our illusion of successfully getting him to “safety” via a college campus rapidly dissipated. 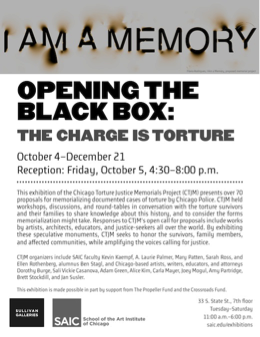 Last week, the city of Chicago made history when the City Council unanimously voted to pass a reparations package for Chicago Police torture survivors, specifically a group of African American men who were tortured by former Commander Jon Burge and detectives under his command. The culmination of decades of struggle against Burge torture and a more recent #RahmRepNow campaign led by Chicago Torture Justice Memorials (CTJM), Amnesty International, Project NIA, and We Charge Genocide, this marks the first time in the United States that a municipality will provide reparations to African Americans in response to police violence.

The package was based on the Reparations Ordinance introduced to the City Council in October 2013 by Aldermen Joe Moreno and Howard Brookins. One year before this, the ordinance had made its first public appearance on the walls of an exhibit called “Opening the Black Box: The Charge is Torture.” Curated by CTJM, a collective of artists, educators, activists and attorneys, this exhibit illustrated the power of art as a call to action.

“Artists are here to disturb the peace,” James Baldwin said. And that was the intent of our collective. Preceding the exhibit, we put out a call for proposals asking justice seekers to unleash their radical imaginations and create speculative monuments that memorialized the brutal history of Burge torture and the struggle against it. Our call for proposals was not a juried contest, instead we promised to showcase all proposals received in an art exhibit or a dedicated website. Over 70 artists from around the world responded with submissions, and one year after we put out our call for proposals, we produced the “Opening the Black Box” exhibit at the School of the Art Institute of Chicago’s Sullivan Gallery.