It is not a surprise that the film Straight Outta Compton has had great success at the box office. To many hip hop heads, this biopic about NWA, one of the most pivotal and provocative groups in hip hop history, is long overdue.  However, it wouldn’t be an NWA film without controversy. In this article, Dr. Billye Sankofa Waters responds to the film from her personal and scholarly platforms.

I recognize the social significance and lyrical contributions of NWA; I grew up as a young girl under their watch. As a matter of fact, most of the hip hop/rap I first listened to was from the West Coast and I often found myself caught between wanting to be a “bad bitch” or a “gangsta bitch” (but of course never a “hoe bitch” or a “crack bitch”).

Now, as a grown woman, I felt very conflicted about going to see this movie. In the past few months leading up to the release, we’ve all been reminded of the remarkable contributions Dr. Dre and Ice Cube have made in the entertainment industry – e.g. bringing the West Coast into the hip hop conversation, discovering/producing talent such as Eminem, Snoop, and Kendrick, showing a universal evolution from “niggaz wit attitudes” to daddies with family-friendly adventures who make million-dollar industry deals. The latter contribution is the most brilliant and impressive. And while Eazy E may have been a major part of the NWA foundation, for me, it was his HIV/AIDS diagnosis and death at the age of 31 that was most significant; it turned our generation toward a consciousness around sexual risks and testing in ways that Magic Johnson’s announcements four years prior had not. Overall, at the peak of their career as NWA, what I remember most about these men (including Ren and Yella) were three important things: they collectively told the white stream world “FUCK YOU”; I needed “parental permission” to go near them which made the whole package all the more intriguing; they beat women and it was hardly a secret. I knew this because I loved listening to Michel’le and paid attention when there were “rumors” that Dr. Dre was beating her. However, it was all quiet – and routine enough – for me to ignore.

So yes, they are icons. But I am so exhausted with celebrating men at the absolute expense of my humanity, my consciousness, and my very body. I’m too tired to hold them up. NWA is credited for raging against white supremacy in the early 1990s. Well, so were Black women. Moreover, the late Ms. Melodie, Salt n Pepa, MC Lyte, Queen Latifah, Sister Souljah, Yo Yo, and TLC demonstrated lyrical skills through this hip hop platform to push and dismantle conversations that ranged across misogyny, sexuality and respectability politics to domestic/street/drug violence and government accountability (Kitwana, 2002[1]; Pough, 2004[2]). Meanwhile, NWA – these pillars of gangsta rap – were raging against us as well. Before seeing the film, I absolutely doubted their abuses would be meaningfully addressed in the film because it would distract from the “larger” narrative of these men. And this belief – you be great, while I be quiet – just exhausts me. 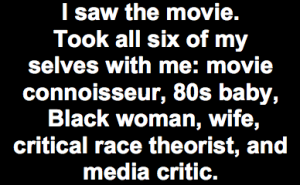 I saw the movie. Took all six of my selves with me: movie connoisseur, 80s baby, Black woman, wife, critical race theorist, and media critic. This is what all of her said:

1. Movie connoisseur:  Well done F. Gary Gray, especially if I were from Compton. I believe you did right by your city. Great casting (except Snoop – y’all coulda kept that one) and great acting – especially Jason Mitchell.

3. Black woman:  Really. Nothing?! Y’all gon’ act like NONE of that actually happened? And gon’ go for the “Bye Felicia” as a comedy trope in that scene? REALLY?!

In fact, the only moment of physical male/female violence in the film is when Dre’s mother slaps him out of love and fear. It is so absolutely and incredibly dangerous – and irresponsible – to drop this off and just leave it. In fact, there was a clear line between the so-called groupies/hoes/bitches in the film and those who were highlighted as their wives and the mothers of their children.  All of which leaves me to wonder, who gets to draw this line?  Adding injury to insult are the scores of us who change our profile picture to advertise we’re “STRAIGHT OUTTA Chocolate City… the South Side… 5th Ward… Nola…” with the Beats By Dre icon perched on the bottom-center of the screen. We are making this film happen and we collectively asked for more when we cast our 60.2 million dollar ballot at the theatre opening weekend.[3]  Me included.

4. Wife:  My partner and I argued for about 2.5 hours before actually going to see the movie. “You know your need to be entertained is at the expense of people you care about, right? Like your sisters and your wife. Let’s just put that all on the table.” I reminded him of a colleague who admonished him about reposting a video mocking street harassment and noted that this work creates an environment that is unsafe for women. He responded that as a researcher, feminist, and artist, I am perfectly equipped to see the film and then present a well-informed critique – not one just based on assumptions – to speak back with all my lenses and meaningfully deconstruct it.  “But I have to vote with my money in order to do that!  I have already given too much of my money to Tyler Perry and Quentin Tarantino for the same exact reasons. Besides, I remember the songs! I’ve watched the docs and interviews – even the 30 for 30 Cube did, and I’ve seen Michel’le still talk about the abuse like she did something wrong.  I’d rather give my money to the man with the DVD case because I can’t believe I’ll learn anything new.” To this, he responded, “That’s exactly why you should go. And then tell everybody what you think while it’s fresh on their minds.” The conversation had many more pitches and ranges, including tears, and alas, I ultimately made the decision to go and write about my experience, not my assumptions.

5. Critical race theorist: Clearly, this review is focused on intersectionality, which is largely identified as a CRT tenet introduced by the work of Kimberlé Crenshaw (1989)[4]. In addition, interest convergence springs to mind: NWA needed a stage (and money); the music industry needed to send messages to the Black community. In other words, hip hop—and I’m speaking very generally about early East Coast hip hop/rap that is well-regarded for challenging social conditions and the government, making you dance and have fun, and working to promote positive self-images especially against the groundswell of police brutality and white supremacy—needed Black faces (via a Jewish manager and cofounder nonetheless) to disrupt this growing consciousness of Black folk and maintain social order. In our generation, this “social order” has not always been so clearly marked with white hoods, fire hoses, and police dogs but through controlling images and a media reel as old as “Birth of a Nation” and nascent as “Empire.” So the industry decided to promote gangsta rap – reality rap – under the guise of the 1st amendment and Black male angst (also fully packaged with a violently insatiable thirst for money, misogyny, and homophobia). Perhaps “Fuck the Police” was just the Kool-Aid while everybody got sick off the Red #40 dye.

6. Media critic: Given the above thoughts, why release this film now? Amidst #blacklivesmatter and #sayhername? Amidst the same conditions that the industry sought to promote NWA in the first place (e.g. Latasha Harlins, killed in 1991, and Rodney King, victim of blatant police brutality that same year), it feels as if Hollywood dragged out an old rug, knocked the dust off, and dropped it over another social crisis. I sincerely wish I could just watch this movie for the sake of watching a movie, but images are designed to deliver messages. Period. Some are easier to digest than others. While I understand the narrative of Black men as the underdog barking at the system, this particular depiction of NWA just showed that they never untangled themselves from their masters’ leashes. If this were just a film about a group of men who indeed fought local and federal laws to assert their freedom and humanity as Black people through music, great. But when a student digs deeper into the NWA narrative to uncover their lyrics and discovers how much their work actually furthered white wealth and white supremacy at the very expense of the communities they came from, the foundation of their empire runs in direct opposition to the grown-up, hind-sighted images that Gray, Cube, Dre, Eazy’s wife, along with two other producers, and Universal Pictures have handed us. This movie draws virtuous connections from these men to censorship and business savvy but cataclysmically fails at assigning responsibility for the symbolic and physical violence that was done not just to Black women, but also to youth who have not contextualized gangsta rap messages and examined them as white stream marketing rather than sustainable lifestyles. This is not “hip-hop history,”[5] Mr. Rolling Stone. This is image revision. So nah homie, I don’t need to see nothing like this again to walk away feeling the same way I did when I went in.

My six cents. Contradictions and all.

a ho, a bitch, a despicable female, an upstanding lady[6]