Ronald Kitchen’s memoir, My Midnight Years: Surviving Jon Burge’s Police Torture Ring and Death Row, proceeds with the relentless rhythm of a horror story. You know what you’re getting into from the beginning — you expect a range of jolts and shocks along the way — and yet there’s an unanticipated surprise in Kitchen’s descent into the dungeons and catacombs of our vast prison system: the real horror is all of us. The peculiarly American gulag rides along on our willful blindness, manufactured ignorance, and passive participation.

Kitchen’s family moved to Chicago from Georgia in 1960 towards the end of the great African American migration. They were one of the first families in the massive Robert Taylor Homes, a public housing project on the south side. When Robert Taylor became unlivable because of official neglect, they fought their way into the Back of the Yards neighborhood on the southwest side — resisting white racist attacks the whole time. While Ronald held many jobs as a teenager in the early 80’s, the city that kept Black people out of any functional economy drove him to join a crew that did warehouse robberies and he later went into business as a drug dealer.

“Where my family, and others like them, had worked to integrate housing, the neighborhoods had vanished,” Kitchen writes. “White residents and the leaders of the city — families like the Burges and the Daleys — had literally preferred to destroy and abandon entire neighborhoods rather than to consider breaking down barriers of racial separation…When the white folks left, jobs, services, and businesses had disappeared too.” The truth is that the white power structure has imposed a lockout on Black communities for generations, a lockout that drove people to extreme measures to survive and then blamed them for surviving.

Kitchen’s life of crime, though, was petty and his hope was to get out — to begin a video game business or perhaps open a roller skating rink. While saving money from drug deals, he was picked up in 1988 by the police and charged with multiple brutal murders in the nearby Chicano neighborhood. In the Area 3 “violent crimes” unit of the Chicago Police Dept. under the command of Jon Burge, Ronald Kitchen was brutally beaten and tortured until he signed a confession that the cops had written up. It was only this confession (and no physical, circumstantial, or eye-witness evidence) that landed him on Death Row. The reality is that Area 3 police headquarters kept its own torture rooms, with basically the whole detective force involved. They had established ways of carrying out beatings, water torture, electric shock, and much more. This is how they got confessions. The details are all-too familiar and so is the result: Kitchen awaited his fate on death row even though he had nothing at all to do with the murders; the cops closed the case, and Area 3 detectives added to their record rate of “solved” murders.

While reading this beautiful memoir, I kept coming back to the questions of these cops — and the prosecutors, doctors, judges — all the people who conspired to keep the torture regime going. Actual human beings (I think these people must be of the same species) willingly sent people to death row or life in prison when they knew the people they were sending were innocent of the crimes themselves. Can you imagine that? Could you do that?

One important accomplishment of this memoir is to remind us that mass incarceration has faces, human faces like Ronald Kitchen and his friend and fellow torture victim Marvin Reeves. The numbers and statistics are staggering. But each individual story is complicated and particular, a universe of valuable life and culture, a crucial part of a network of family and community. As Kitchen points out: “Anyone who knew me would know that this whole story about the murders was completely preposterous. Even if I couldn’t, they would tell a judge and jury I was innocent. Although I didn’t know it yet, the problem would be getting strangers to know me, to care enough about my life to listen to the real facts. Burge and his crew were already operating with that knowledge. They didn’t worry about the little details because they know that the big lie — you might call it racism itself — was too deeply engrained in people’s minds to allow any room for doubt.”

Soon after Ronald and Marvin were arrested, a torture victim sued Burge and the city. The forced confessions were already exposed due to the resistance of the victims and the powerful legal work of the People’s Law Office. In fact, the Chicago Reader broke a major story, called “The House of Screams” in 1990. And in 1993 Burge was fired, though it would be many years before he was arrested, and then only for minor crimes. He ended up doing a few years in minimum security federal prison. But Kitchen and Reeves stayed in prison, even as they articulated their innocence over and over in appeals. And the prosecutor’s office, knowing full well the bogus nature of the confessions and even the suppression of evidence that would have found them innocent, continued to fight to keep them there. Kitchen did not get out of prison until 2009, having been on death row for 14 years and in prison for 21 years.

There were so many Illinois cases of exoneration, so many times that convictions, even on death row, were overturned, that the community campaign forced the conservative Republican Governor George Ryan to acknowledge that innocent people were being executed. In 2003 he commuted all death row sentences, over 160 in all. Kitchen was moved off of death row but had to endure life in the general population for six long years before he was finally let go, and eventually paid some money as the state admitted its lies. He had survived. Kitchen describes those who fought to free him and remained steadfast through all those years. First and foremost, it was his mother Louva who kept the fight alive. By the time he was freed, however, she had sunk into dementia — tragically she could not recognize her son — and she died soon after. Others on his side included the steadfast anti-death penalty activist Alice Kim and the young attorney Carolyn Frazier.

Ultimately, as the class action lawsuits piled up against the torturers, the city agreed to an overall settlement. In an unprecedented surrender, the City of Chicago in 2015 agreed to the following elements of reparations:

Throughout this gripping memoir, we are brought face to face with the humanity, the dignity, even the heroism of these many victims of this evil criminal so-called justice system. We come to love Ronald Kitchen and his community.

But what gnawed at me was the unexplored dimension, the shadow side, of this nightmare story. Who are these men who perpetuated the torture? Who is Jon Burge? Who is his lieutenant Michael Kill and and who are the rest of the self-named “midnight crew?” What is in their secret heart of hearts? Do they have children? Go to church? How do they think about their acts — which, let us remember, were not spontaneous eruptions in a moment of passion but were in fact considered, sustained, daily cruelties? People like this never write a memoir. We need that memoir.

One can only speculate about them. They must be so deeply invested in a violent white supremacist hatred of Black people, they must have so deeply defined them as “other,” that they could carry out the flaying of Black bodies with equanimity, even with joy. This is the brutal face of power and privilege. Not just microaggressions, not just slips of the tongue, but full-throated white supremacist hatred and violence. And remember that only Burge’s crew was exposed. We have since learned that the Chicago police maintained an entire building, an off-the-books interrogation compound, a black site interrogation center much like the CIA has operated around the world, called Homan Square (read more about this in The Guardian’s piece “The Disappeared.”) This was not some bad apples, this was policy.

And the killing and torture goes on. Perhaps the most striking cases in recent memory are the shooting of Laquan McDonald in 2015 and of Harith Augustus just this month. The entire system is implicated. It’s not a justice system that has just made some casual mistakes. It’s a system of state violence on Black and Brown bodies that continues to do its work, alongside the violence perpetrated by housing, jobs, and schools against oppressed communities. When we talk about racism as more than ideas in white people’s heads, as institutional, the Chicago story is exhibit number one.

And all of us, especially white people who are marked with the privilege of the benefit of the doubt by the state forces, who go about our daily lives, who shake our heads and imagine it’s a shame but what can we do, how are we perpetuating this cruelty? It is like this in all cities, but Chicago, in all its extravagant goriness, has exposed the ugly underbelly of the police-courts-prison system as modern slavery. We have to work very hard to avert our eyes, to ignore it, and to hold on to our myths of white innocence.

Rick Ayers, Ph.D., is an Associate Professor of Education at the University of San Francisco in the Urban Education and Social Justice cohort. He taught in the Communication Arts and Sciences small school at Berkeley High School, where he pioneered innovative and effective strategies for academic and social success for a diverse range of students. His books include: • A Teacher’s Guide to Studs Terkel’s Working • An Empty Seat in Class: Teaching and Learning after the Death of a Student • Great Books for High School Kids: A Teacher’s Guide to Books That Can Change Teens’ Lives (co-author with Amy Crawford) • Teaching the Taboo: Courage and Imagination in the Classroom (co-author with William Ayers) • You can’t fire the bad ones: And 18 other myths about teachers, teachers unions, and public education (with William Ayers and Crystal Laura) 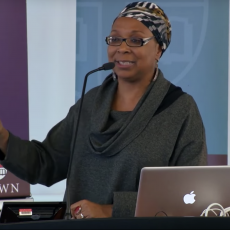