On MLK day, I took our three teenage children to watch Selma. I worried about the film’s effect on them because I knew it would provide another heavy layer of heart-wrenching historical information for them to carry, which makes their walk more labored than their non-black counterparts in the USA. I hoped that the experience would be beneficial, if for no other reason, to flesh out their historical knowledge, and to show them the rare occurrence of a major feature film directed by a black woman. But most of all, I hoped it would raise their awareness and enhance their sense of identity. This was a risky endeavor because most of their friends spent the holiday watching popular action and horror films. But it was important to me that my children spend the time on this particular film at this particular time.

The tragic murders of Mike Brown, Eric Garner, and Tamir Rice set the stage for my three children to experience Selma. Within the last year, our family discussions about race in America have been more urgent because of the tangible visual evidence, thanks to smart phone cameras and footage, that racial history continues to evolve and that it impacts us in a real way right now. Our frequent conversations about race are complicated because our children’s understandings of blackness are shaped by the different constructions of blackness within their family. Their mother is half Igbo and half Trinidadian. Their father is Yoruba. They have aunties from Mali and Tanzania and an uncle from Zimbabwe. They have cousins from Nigeria and England. But they themselves were born and raised in the US so they are constantly searching for a comfortable identity since they are neither completely African American nor are they completely Nigerian.

So these three black teenagers hover somewhere in between, constantly encountering situations that shake the undulating parameters of their identity as both African and American, giving a different meaning to W.E.B. DuBois’ concept of double consciousness. For them, their “two-ness” is multiplied by “unreconciled strivings” between different cores of blackness and non-black, mainstream society. Their everyday interactions cause them to constantly grapple with the implications of their complicated identity, whether it is their white friends telling them they are different from those “other blacks,” or African American friends who scold them for “acting white,” or a teacher who assumes that they will explain Kwanzaa to the class since it’s an “African thing,” or another who can’t resist touching my daughter’s natural hair, without permission.

There have been racial episodes happening around them all their lives, but somehow the nexus of Brown, Garner, and Rice culminated in a watershed moment for my children, and I watched as they firmly gravitated towards their African American identity. They felt strongly about the verdict in Ferguson, argued with friends who supported Darren Wilson, and when a middle school teacher told the class that Michael Brown caused his own demise, my son and his black friends took it personally. They also noticed a marked difference between the responses of their black and white friends, many of the latter not seeming affected by these troubling news stories.

As a family, we brainstorm regularly on what the most appropriate reactions should be when these issues come up among their peers. My husband and I want our children to understand the anatomy of racism in the US so that they have historical context and models of activism to study and emulate. During these family summits, we often set aside our ethnic and cultural identities to occupy a straightforward black space. After all, we reason, the police officers who killed these three black males—and countless others—did not care whether their victims were from Timbuktu or Ferguson. All these police officers seemed to see, if we are to believe their testimony, were three “men” who were black and therefore threatening.

The Black Lives Matter movement and other such responses to the tragic nexus of murders last year are the twenty-first century versions of the civil rights and black power movements, so I hoped that Selma would provide critical context for my children. As we took our seats in the theater, I noticed that there were very few young black people at this screening, and I recalled all the times I had heard older black folks complain about young people not knowing or caring about the civil rights movement. As I watched my children’s reactions throughout the movie, I could understand why this is the case. 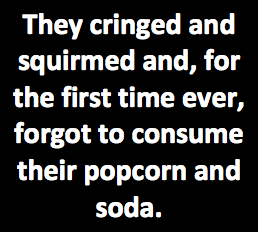 The civil rights movement of the 1950s and 60s is extremely painful to watch. Young African Americans, including my own children, are reluctant to dig deeper into that era because it is simply too difficult. From the first terrifying church explosion, their bodies grew tense, their eyes captivated by the power of this one chapter in the story of resistance to white supremacy told masterfully in this outstanding film. At times, when hatred seems to radiate off the screen—when those four little girls are killed, when Annie Lee Cooper is turned away from voter registration, when Jimmie Lee Jackson is shot in cold blood, and when governors, sheriffs, policemen, and even, at times, the president talk about Negroes as if they are the worst kind of chattel on earth—my two daughters would look away from the screen, and my son would pull the top of his hoodie over his eyes. They cringed and squirmed and, for the first time ever, forgot to consume their popcorn and soda.

In scene after scene, Selma delivered lessons that transcend time and space. The fact that King was surrounded and supported by brilliant and brave people—both black and white—who had critical roles in the movement was a great lesson. For too long our children have been given a sanitized version of King, portraying him as nothing more than a gentle and calm pastor who preached peace and tolerance. Instead Selma offered my children a more robust picture of a man who had radical ideas, who had a sense of urgency about him, who faltered sometimes in his personal and in his professional life, but one who persevered. Also, the brief inclusion of Malcolm X and the reference to his evolving consciousness was incredibly useful.

As an ethnomusicologist, I was thrilled that Selma gave us some musical bonuses through the inclusion of Mahalia Jackson and Harry Belafonte. Although these were brief references, it was enough to provoke my children’s curiosity about these luminaries and their significant roles in the movement. At the end of the film, when the credits began to roll and “Glory” by John Legend and Common came on, my three companions paid attention and listened as Common skillfully connected Selma to Ferguson, then to now.

The film weaves itself into the tangled threads of my children’s identity, because both David Oyelowo, who played King, and Carmen Ejogo who played Coretta, have Nigerian heritage. Oyelowo is Yoruba like my husband and Ejogo has Igbo heritage, as I do. This interesting coincidence reminds us that the story relayed in this film is just one episode in the saga of racial oppression, which has severely impacted black folk everywhere. Selma should remind us of the Kenyan Mau Mau, the Yoruba market women, and the anti-apartheid activists, all of whom fought against colonial domination and racial oppression. We should remember heroes like Nnamdi Azikiwe, Kwame Nkrumah, and Nelson Mandela, and of all the marches and movements that continue to take place in support of black folks here in the US and in places like Chibok Nigeria. This film reminds us that #AllBlackLivesMatter.

Like many others, I was outraged that Selma director Ava DuVerney was not nominated for an Oscar. But I cannot help holding my own celebration for the genius of DuVerney and acknowledging that she serves my family much better than anything else the Academy is esteeming this year. What Selma did was show my children in vivid detail the story that paved the way for them to go to any school and live anywhere; the movement that allowed their parents to migrate to the US. I won’t lie, watching Selma with my children was extremely difficult, but I recognize that it helped them understand how what happened to Brown, Garner, and Rice—and the discourse around those cases—was tinged by this racial history and by continued racist attitudes and systems.

But most importantly, Selma reminded my children of what we tell them everyday: even though their history is heavy, they must stand tall and navigate the world, confident in their beautiful black skins. Whether they are African or African American, they can follow King’s teaching to cross every bridge with determination and wisdom, and to always “demonstrate dignity.”