RETHINK SHINOLA is a multi-part, Internet-based artwork analyzing and critiquing the branding messages publicized by the company Shinola, founded in 2011. Shinola’s name is “a nod” to the former Shinola, a shoe polish company that promoted its products using racist caricatures of African Americans. The “new” Shinola company planted itself in Detroit and leverages and profiteers from the extreme conditions and image of the city as a site of grit and resilience. The brand creates representations of patriarchal whiteness to enforce perceptions of their “leadership” and circulates images of African American employees being grateful for this so-called governance. In Shinola’s narratives, the “wild” Detroit environment needs a civilized savior who can first identify with and then tame and civilize the savage.

RETHINK SHINOLA is a designed tour of Shinola’s past and present, exposing the rhetoric of Shinola and its President Jacques Panis. My goal was to make Shinola’s implicit messaging about White supremacy and labor hierarchies explicit by opening the curtains and re-costuming the players, sometimes literally. The experience of RETHINK SHINOLA begins with an animated sequence of Shinola’s brand history, and continues with a succession of other texts, such as excerpts from Christopher Columbus’s journals and images to contextualize Shinola within a racial history of cultural appropriation and the colonization of resources.

The first video encountered within the artwork, The Implicit Jacques Panis on Shinola’s Quest to Revive American Manufacturing, is a variation of a pre-existing promotional video presenting a typical day-in-the-life of Jacques Panis. I choreographed a succession of hats on Panis’s head throughout the narrative; each hat or wig exposes an unspoken, oft-historical, expression of power. As Panis describes the “craziness” of setting up camp in a city like Detroit, he wears the explorer’s pith helmet; he sports the man of leisure’s top hat as he wanders about the office asking frivolous questions of people who are actually working. The goal here is to allow Panis to openly act out the roles that the original video implicitly conveyed so that these aspirations are made visible for discussion.

The second video within the larger RETHINK SHINOLA project, The Shinola Lecture, recreates Panis’s March 2015 lecture to University of Michigan students in the Center for Entrepreneurship program. I attended this lecture in person and was disturbed by Panis’s representations of Detroit and  the lack of critical response. No Q&A or discussion followed the lecture. The re-creation is faithful to a transcription I made of the original including attention to Panis’s linguistic patterns, which use speech acts such as g-dropping to convey power through affecting minimal effort as well as insulting and bragging to take on an authoritative stance. For example, Panis mocks the Swiss (who initially taught Shinola how to make watches) for not manufacturing all their parts in Switzerland. A year after this lecture, the Federal Trade Commission took action against Shinola for falsely claiming to be made in Detroit.

The re-created lecture, re-presented by an actor and re-filmed, provides the public access to a presentation that is a significant piece of evidence of Shinola’s attitudes towards Detroit and African Americans. These re-creations offer a significant resource to activists and scholars working in areas of representation, consumer culture, race, community engagement, activism, and linguistics.

RETHINK SHINOLA is not meant to be a linear formula to this problem but a model way of looking at complexities, unpacking and addressing them.

Rebekah Modrak is an artist and writer who creates internet-based critical interventions into capitalism to critique brand appropriations and visual culture. She is the lead author of Reframing Photography (Routledge 2011), a book critically exploring issues in photography such as representation, re-enactment, and mediated vision. She is the creator of Re Made Company, an artwork intervening into the online media landscape of web design, social media, and consumer culture to analyze and critique how brands appropriate working-class identity as leisurely consumption. She is an Associate Professor in the Stamps School of Art & Design at the University of Michigan. 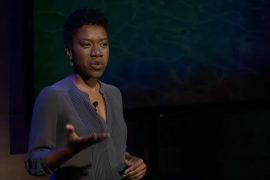 Can stories create justice?
The Fragile Masculinity of Tech Bros and the Failure of Liberal Feminism