Earlier this month the president of the United States withdrew the United States from the Paris Agreement, a pioneering agreement formed at the United Nations Convention on Climate Change in 2015. Countries from all over the world came together to discuss the effects of climate change and the catastrophic impact of greenhouse gas emissions into the atmosphere. The convention culminated in an agreement signed by 195 countries vouching to reduce emissions in order to keep the global temperature from increasing by more than 2 degrees Celsius. Simply put, every country committed to a goal and the responsibility for figuring out how to meet their goal.

Since the first centralized coal fired power plant built by Thomas Edison in 1882, we have been releasing fumes from fossil fuels (formed underground from decomposed organic material) at an alarming rate. During the Industrial Revolution, power plants fueled by fossil fuels like coal increased the quality of life for people living in Europe and America. There is no denying that the world as we know it today would not exist if it were not for the industrialization of every aspect of our lives from farming to transportation. But the devastating consequence of this progress – and our rejection of renewable energy and energy-efficient products – is that our climate has been deeply destabilized.

While fossil fuels help us generate energy to live the lifestyle Americans are accustomed to, they also release carbon dioxide into our air which rises and gets trapped in a layer of our atmosphere. These highly energized compounds heat up the atmosphere and oceans causing catastrophic and abnormal weather patterns which have lead to fatal droughts and heat waves, and without a stable climate we cannot survive. This is the only planet we’ve got, and while it may seem vast and capable of withstanding everything, in reality it is fragile and depends on us to care for it.

That’s truly the bottom line. We will not survive if our earth cannot sustain us.

Yet the United States, which burns more fossil fuels than any other nation in the entire world (17%) besides China, has decided not to invest in protecting our planet and its inhabitants. The current administration is doing irreparable damage to the environment by relaxing environmental regulations, removing protections of our most vulnerable animals, and its renewed obsession with using coal as a means of energy production.

The United States refusal to abide by the Paris Agreement will have devastating consequences. We already wreak havoc on poor countries, who burn next to no fossil fuels and suffer the largest consequences of climate change. Vulnerable people living in poverty who lack of access to reliable infrastructure, water, food, and medicine always face the brunt of environmental catastrophes. Ironically, some of the first climate refugees are from within the United States. A group of Native Americans in Louisiana now have to make the harrowing choice between living precariously in their ancestral homeland or moving to safer ground.

The good news is that there are more of us that care than those that do not. This administration is setting itself up to be one of the worst for our environment, but in recent years we were beginning to see an increasing percentage of electricity generation from wind (8%) and solar (2%). These numbers may seem small, but these percentages are significant considering the size of our country. While we still rely far too heavily on fossil fuels, in 2015 we saw more infrastructure built for renewable resources than we did for nonrenewable energy. The cost of wind and solar power has also significantly decreased, making it more accessible for large and small businesses, as well as home owners and developers.

While the current president of the United States may not have our best interest at heart, the people are not accepting it. There is a growing rebellion of scientists, science-enthusiasts, and concerned people who are refusing to stay silent. Earlier this year, thousands turned out for the historic March for Science in Washington DC and numerous demonstrations in cities across the US in response to the anti-science policies of the current administration. We also saw the bravery of Indigenous water protectors who battled an antagonistic government and the bitter cold to protect their land from the Dakota Access Pipeline which would release dangerous chemicals into their water source. And despite the current administration’s withdrawal from the Paris Agreement, twelve states, countless cities, and Puerto Rico have committed to enforcing the Paris Agreement guidelines to reduce carbon emissions by 26%-28% by 2025.

There’s also so much that we can do from our own home. We need to push for states to pass environmentally-friendly legislation, such as California’s ban on plastic shopping bags. We can commit to reducing our individual carbon footprints with simple steps like using cars less often, buying energy efficient appliances, installing solar panels in our homes, and being more thoughtful about our energy and water consumption. We have to keep yelling, fighting, and demanding more. Our politicians are voted in by us, and if they’re not respecting the will of the people we need to ensure that they will see the results in the poll booths.

There is a renewed sense of climate activism in the air, and we need to demand that our government commit to investing in energy efficient resources, regulate businesses, subsidize renewable energy, and support research and education on the environment. We can’t allow any amount of political propaganda and misinformation to allow us to become passive. As my favorite childhood scientist, Bill Nye stated, “the current climate crisis is reality. We can’t wish it away. What we can do is seize the debate and the denial and move on to solutions, together.” 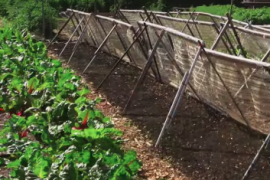 Democractic Eco-Socialism
Fire From Below: Advice For Activism in The Trump Era From Bill Ayers