Growing up in the Caribbean, Trinidad and Tobago to be exact, was one of the main factors that has molded Nneka Jones into the artist she is today. Her astounding love for color and special attention to detail, as influenced by her culture, have been prominent throughout her artistic journey. The artist was never one to accept mediocrity, not only in art, but also in her everyday live and had always been willing to take on a challenge. This led to her to take the risk of leaving behind her family and friends to travel the world in pursuit of both sharing and gaining versatile experiences that would enhance her artistry.

The twenty-three-year old artist who graduated in May 2020 with a Bachelor of Fine Arts from the University of Tampa and a Marketing minor, considers herself an activist artist who uses contemporary portraiture to comment on social issues such as sex trafficking of minors and sexual abuse among women and girls of color. She uses her artwork as a tool to create conversations and raise awareness, forcing the viewer to make connections with the social injustices that are overlooked in their everyday life.

After entering and being accepted into her first public art show, The Gasparilla Festival of Arts (GFA 2019), Jones was awarded the William O’Dowd Memorial Emerging Artist Award and featured in two articles by the Tampa Bay Times. She entered again in 2020 and placed 3rd out of 233 artists, winning the Roddy Brownlee Reed, Award of Artistic Excellence. One of her most recent works, “Colorism” was also named Best in Show at the Albercht-Kemper (AKMA) Juried Undergraduate Exhibition 2019 at Missouri State. Jones has also exhibited at the Tampa Bay Coffee and Arts Festival in St. Petersburg and looks forward to sharing more of her work beyond the Tampa Bay Area.

She quotes, “There is the artwork. The story behind the artwork and the story that the artwork tells.” She believes that her artistic journey has only just begun and she is eager to explore her creative purpose in life, to reach her ultimate goal of being an internationally renowned activist artist.

The Caribbean is often praised for and advertised as the stereotypical “tropical paradise” and a “worry-free” destination. However, as a Trinidadian woman and activist artist, my artwork actively addresses the social and political issues affecting the Caribbean society, specifically women and girls. This is done with the purpose of raising awareness about the rise in sexual abuse through human trafficking and highlighting that the majority of victims are people of color.

My recent series, “Targets” combines symbolism and realism to address the sexual exploitation of minors, particularly young girls of color. The symbolism is explored through the use of condoms and the creation of a target pattern where a young, innocent girl is surrounded by hundreds of condoms and creates a juxtaposition that evokes emotions or some response from the viewer, initiating conversations about sexual abuse and sex trafficking.

In addition, my hand embroidered series, “Targets Variegated”, expands on “Targets” by capturing a wider age range for women and girls. While the subject matter of sex trafficking is often associated with young girls, the series reassures that it is not only limited to children. The range of hand sewn portraits and use of the target symbol reinforces the reality that anyone can become a victim at any age.

As my work evolves, I am reminded of my purpose for creating and how it has molded me as an artist and activist. For the sake of the Caribbean society, it is important for me as a Trinidadian woman of color to raise awareness about topics such as sexual abuse and sex trafficking in an attempt to bring about social change. Through each series and their captivating imagery and symbolism, I hope that this is a call to action for everyone to become aware of sex trafficking and stand up against it. 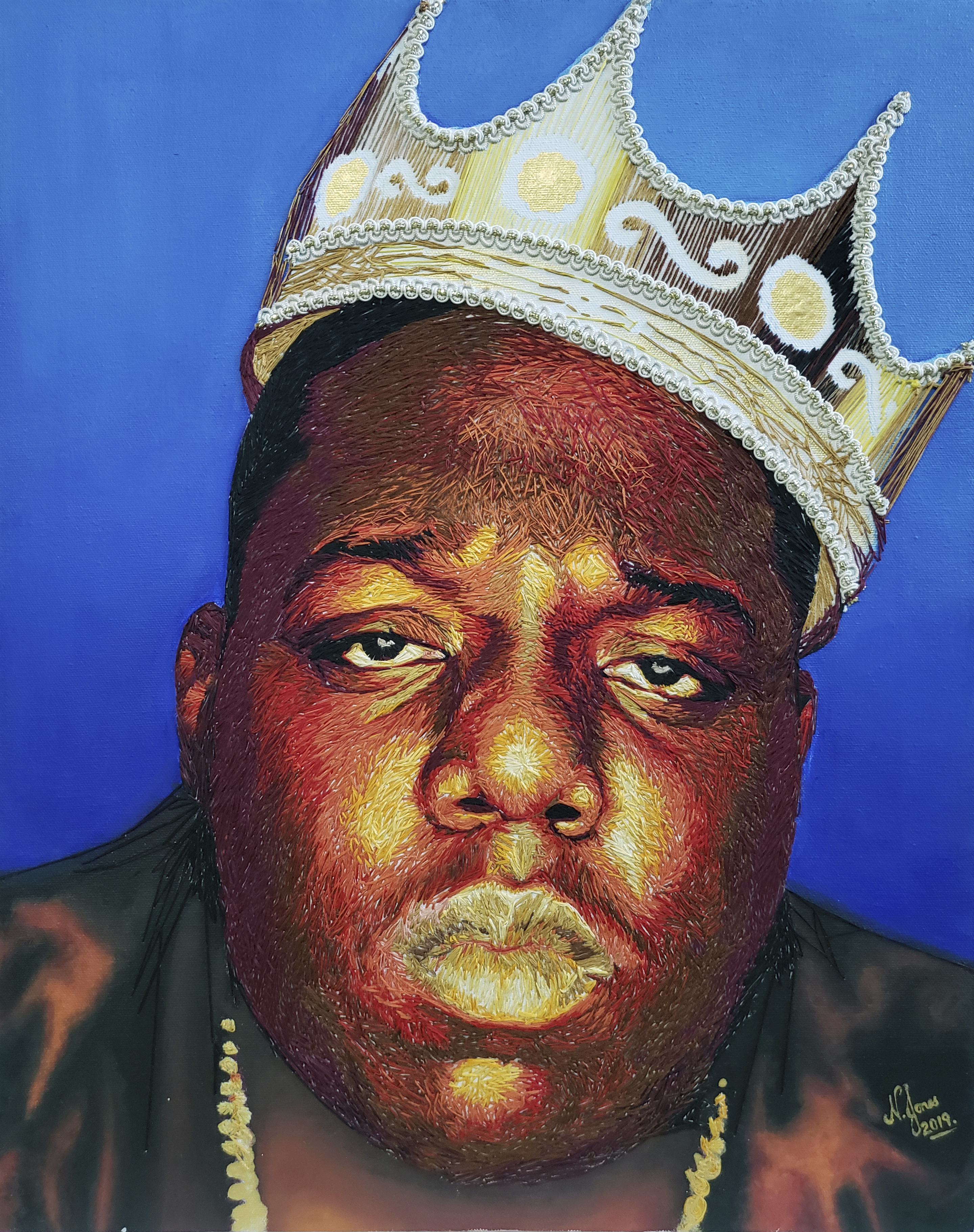 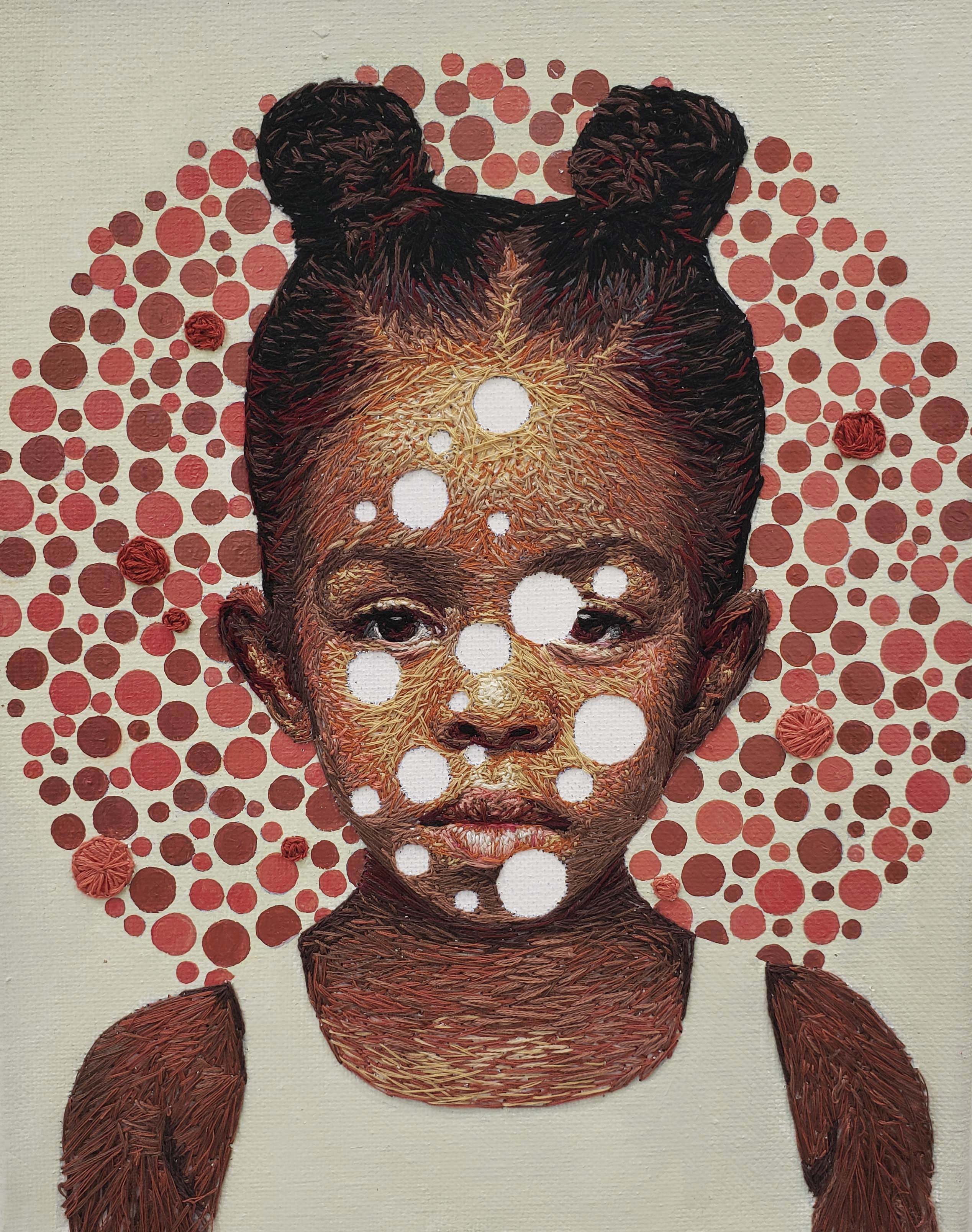 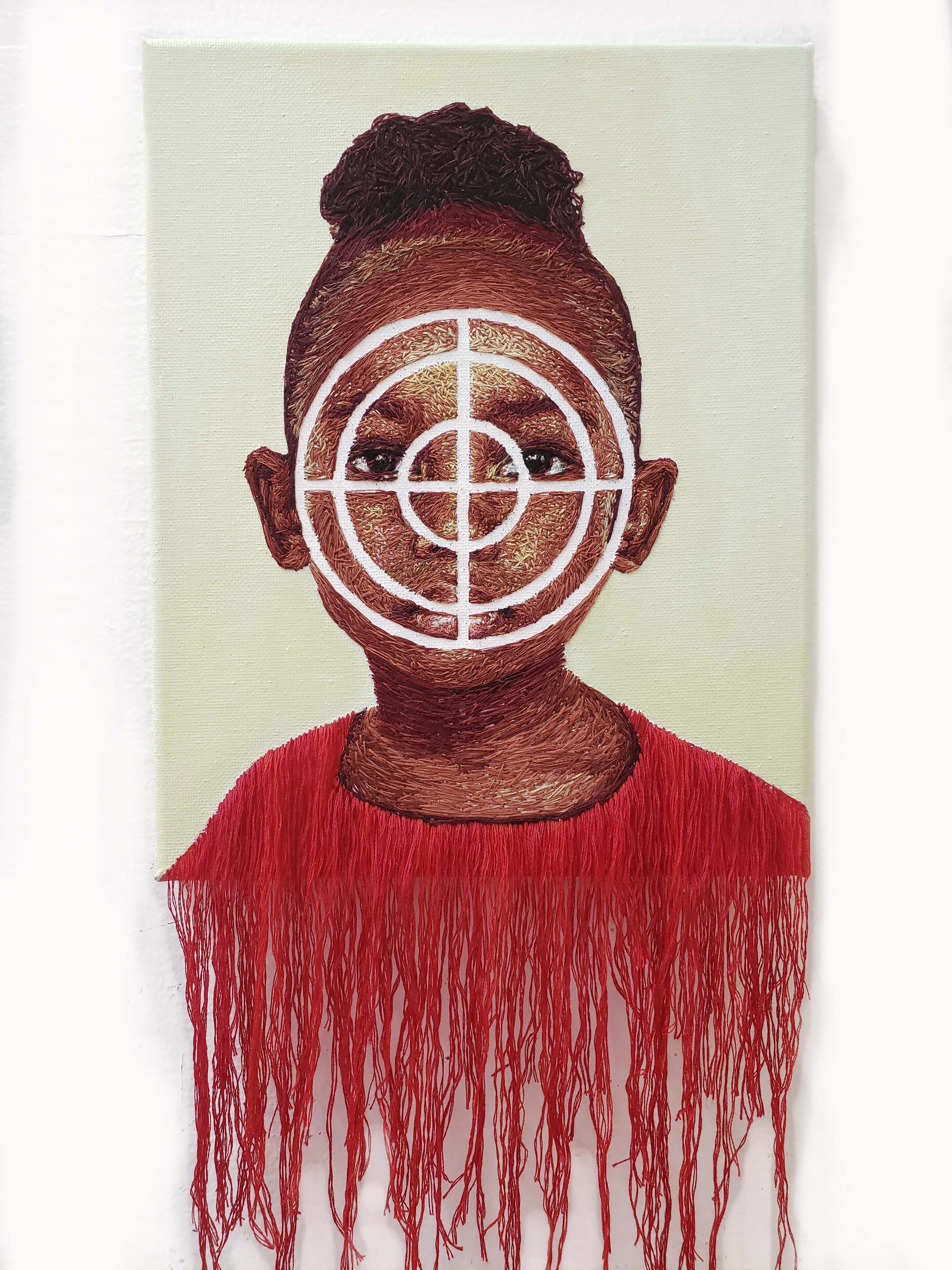 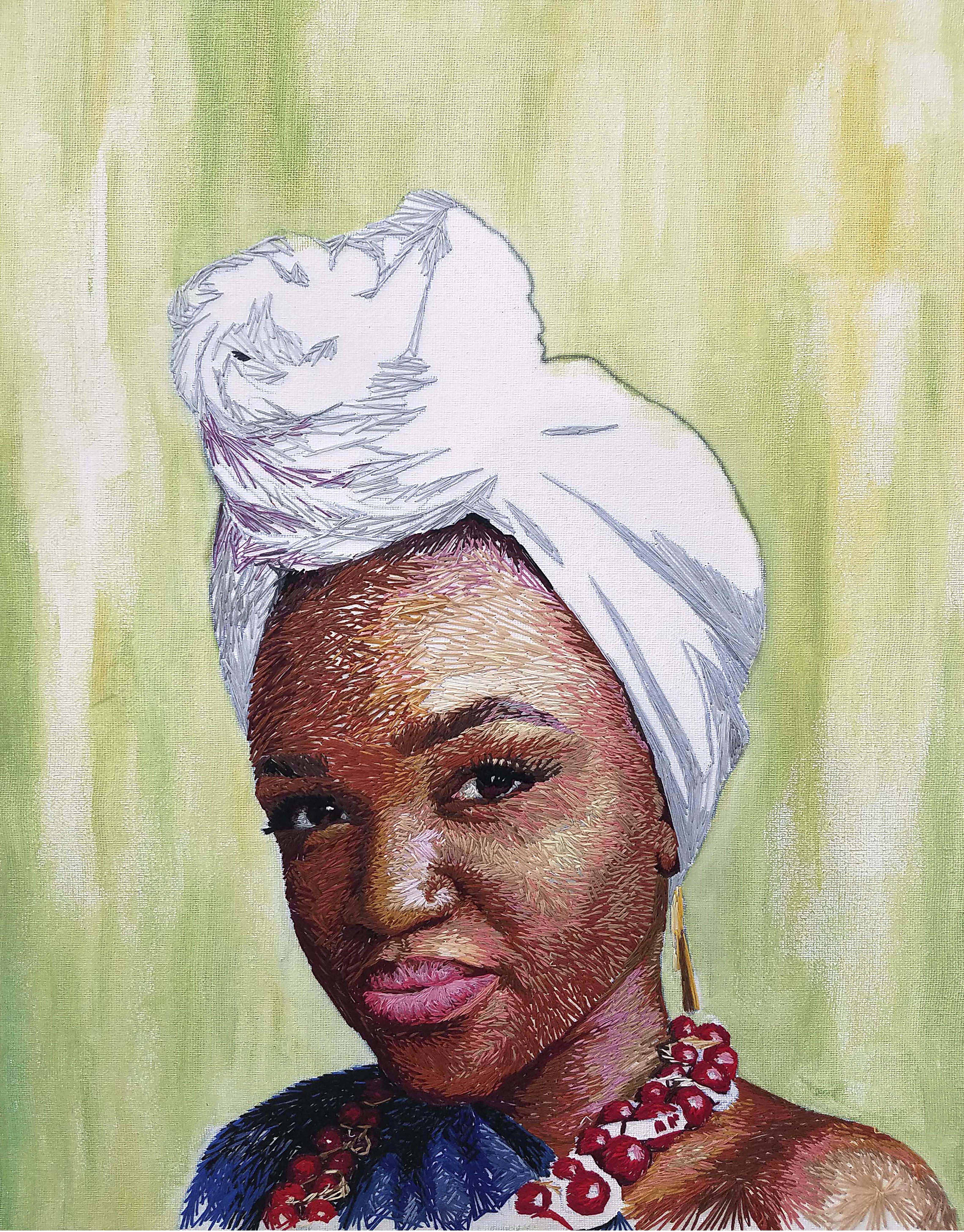 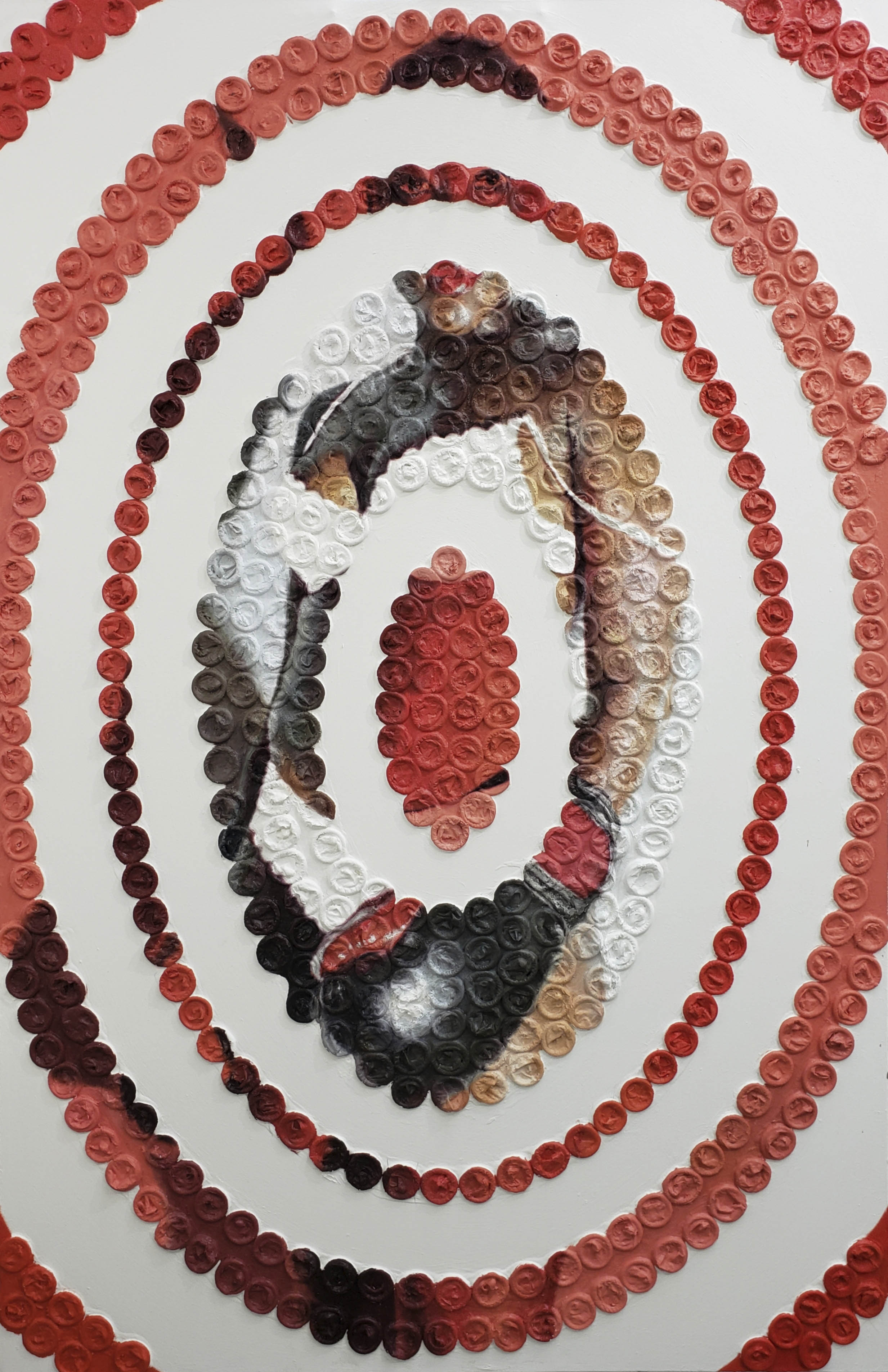 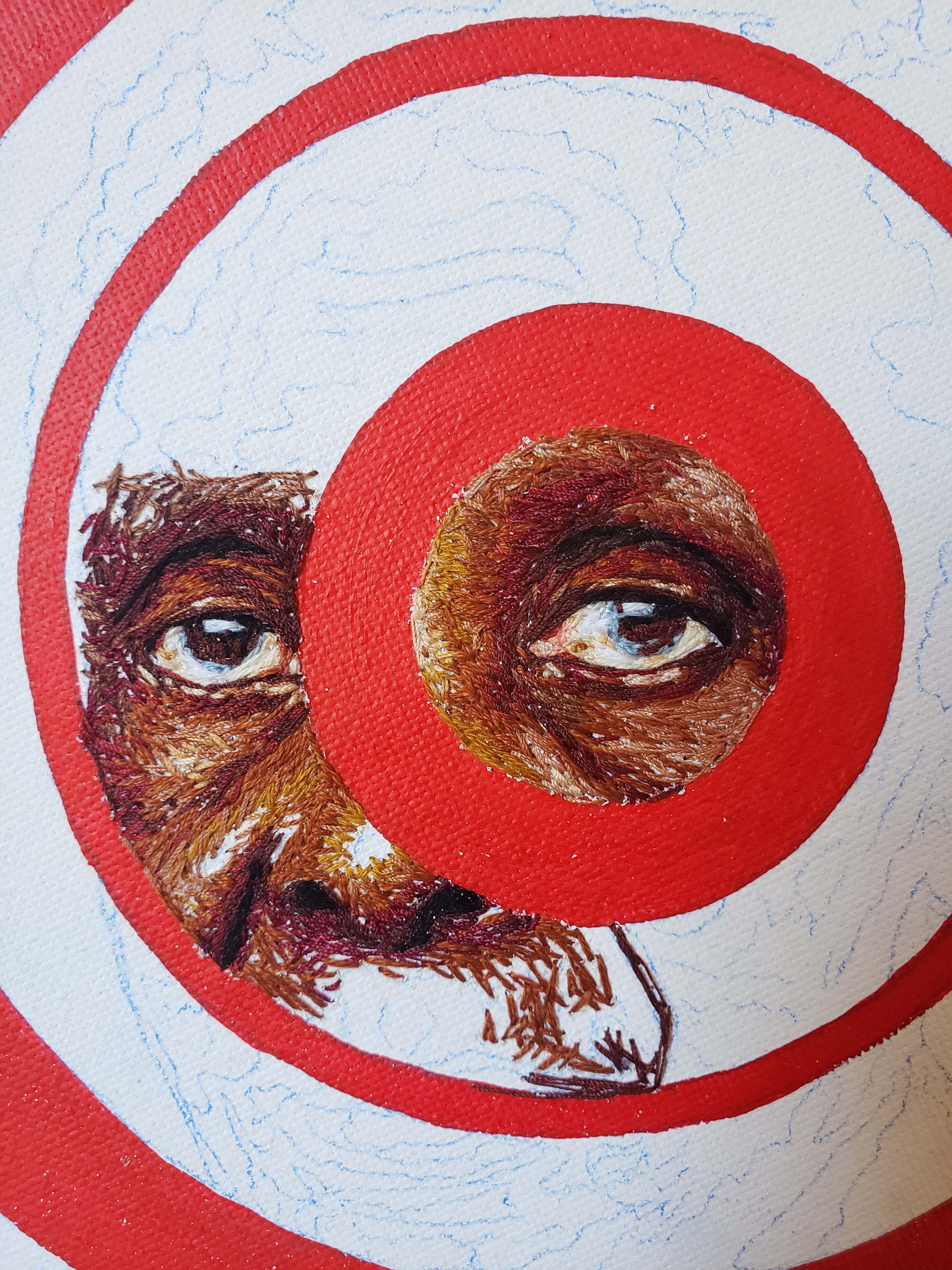 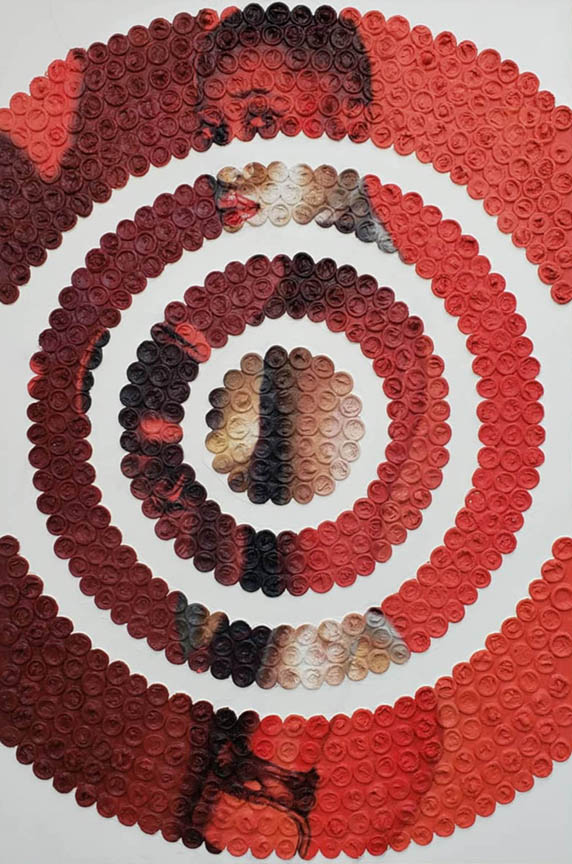 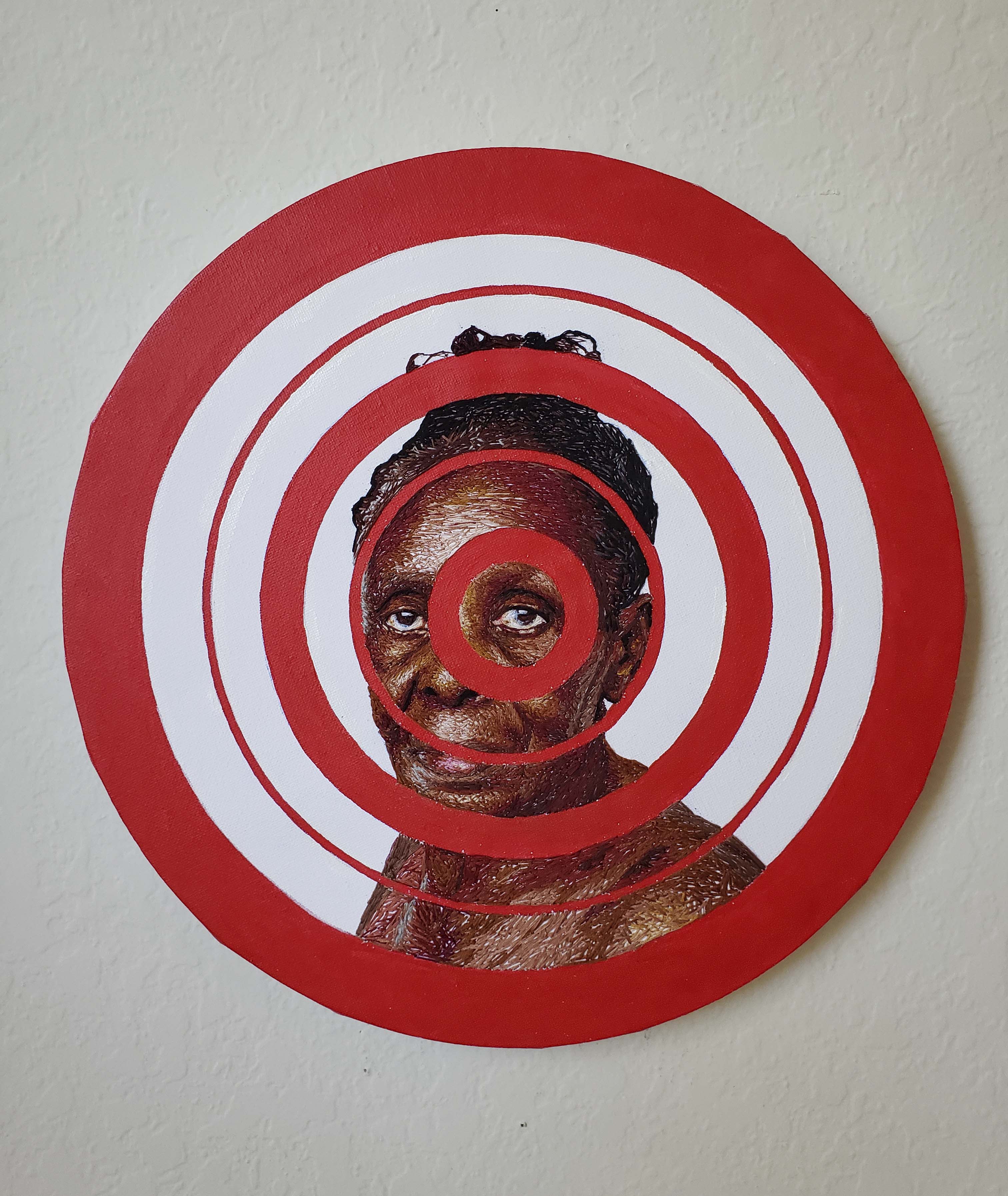 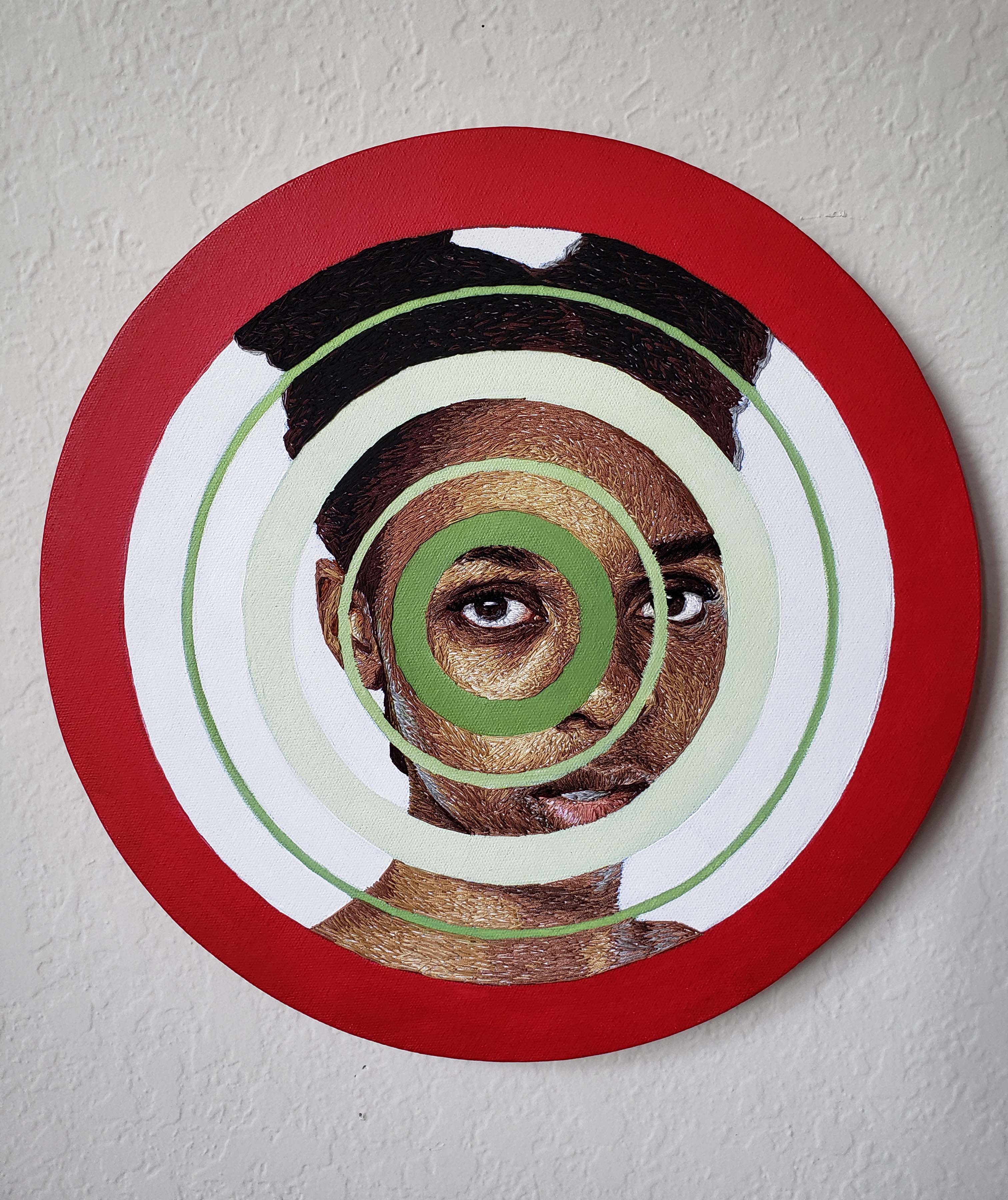 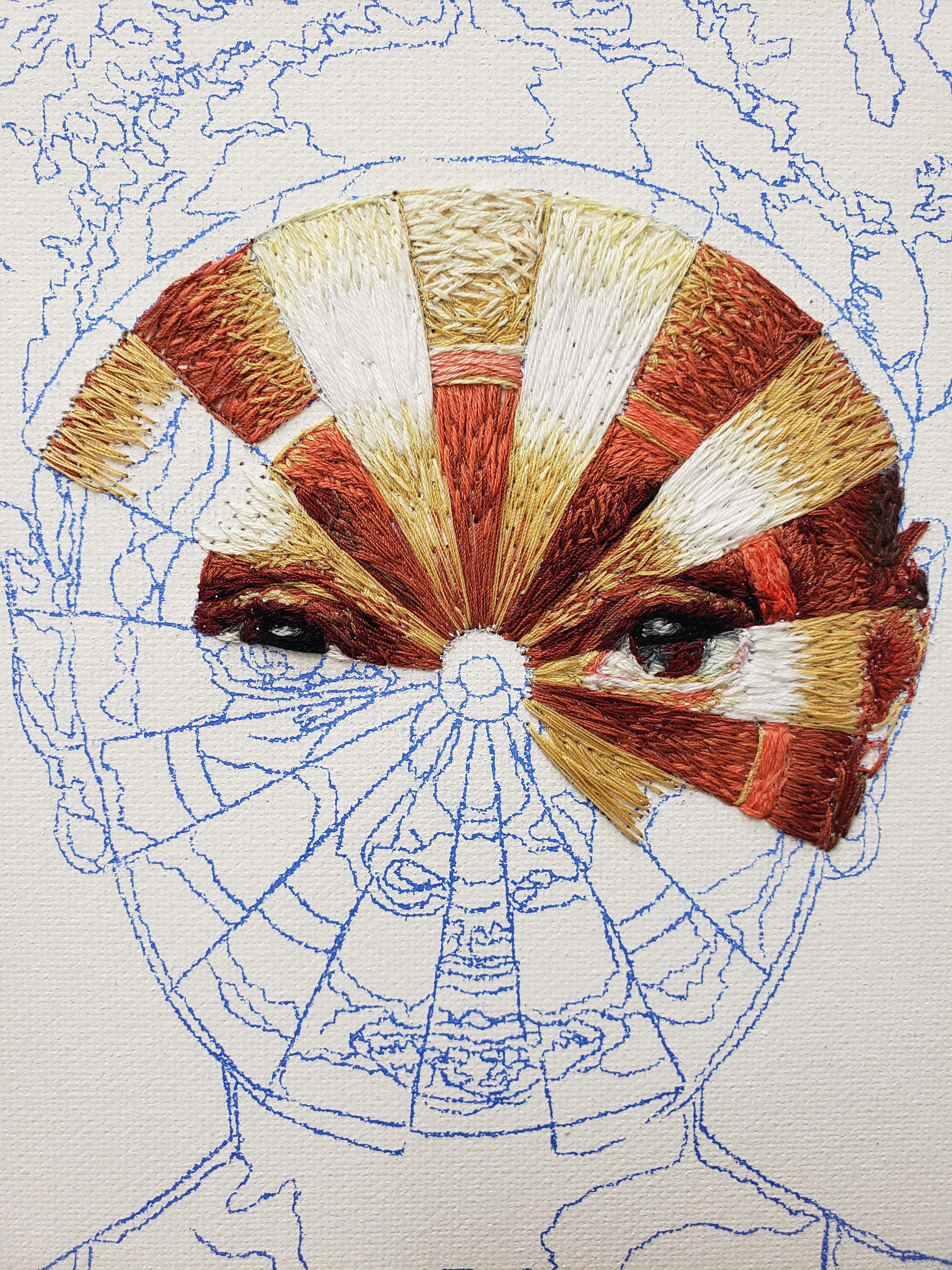 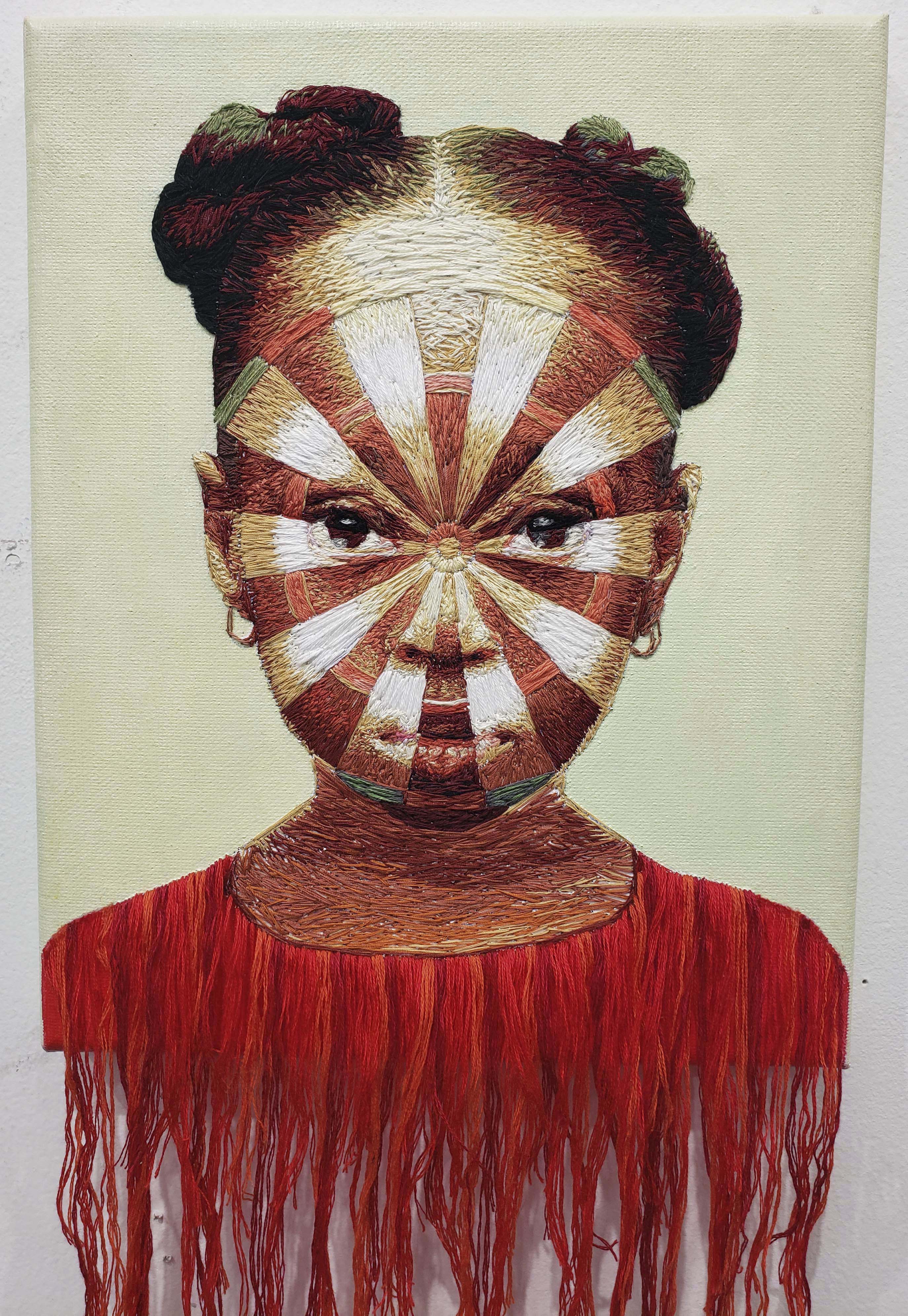 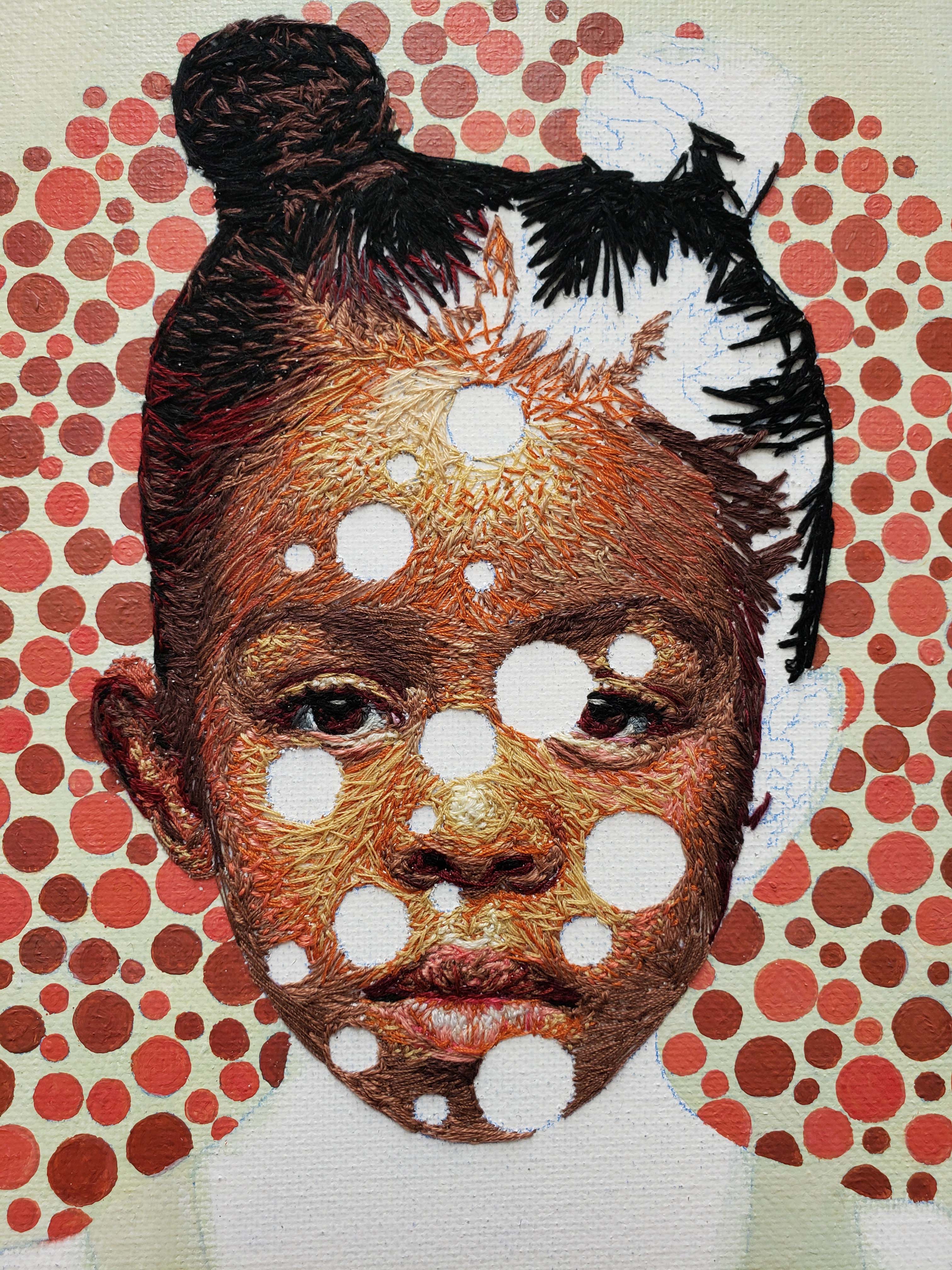 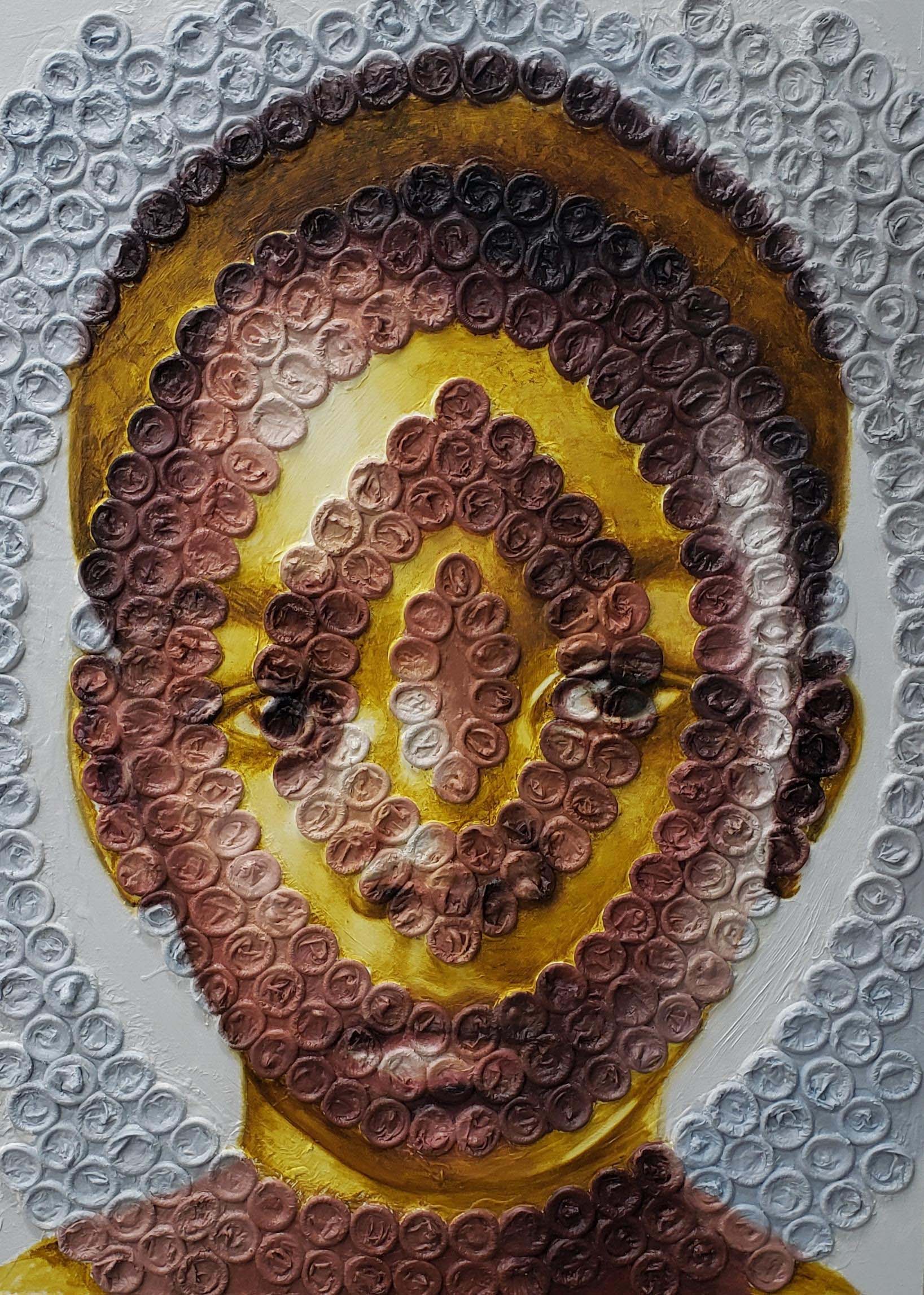 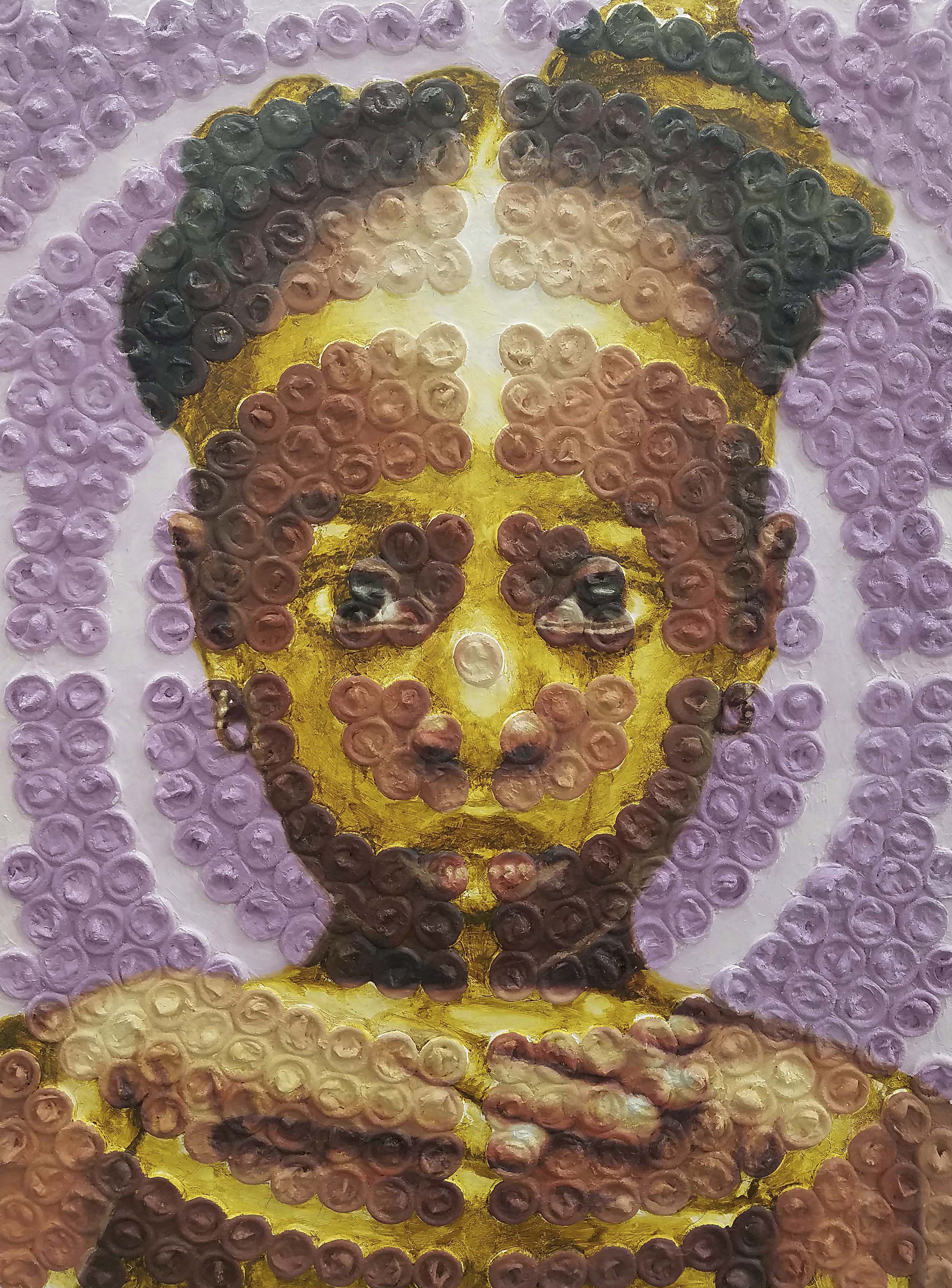