During Ontario’s March Break, Canada’s finance minister Bill Morneau visited the Boys and Girls Club in the Regent Park neighborhood in Toronto. There, he unveiled his new shoes—a long-standing tradition for Canadian Finance Ministers about to release a budget—took photos of him with the children and tweeted, “This year’s budget shoes are from Lorena, because Budget 2019 is about Canadians just like her.”

It’s good that he clarified that this budget is all about Canadians like Lorena, a self-made cobbler who made Morneau’s new shoes, because the budget he released on Tuesday is certainly not for Canadians like the kids of Regent Park. Bill Morneau is the second most important character in the federal government, in a party that has positioned itself as a beacon of progressive values, led by the self-identified feminist Justin Trudeau. The Liberals’ tenure has been marked by contradictions: feminist, but no meaningful policy movement for women; environmentalist, except they purchased an oil pipeline, for example.

It’s no surprise then, that Morneau’s budget, called Investing in the Middle Class, will do very little to help families who fall outside of that rhetorical group of voters. Sixty percent of children and youth who live in Regent Park live in poverty, more than double the percentage for children in the City of Toronto. Fifty percent of adults aged 65 and older at Regent Park live in poverty, too.

The image of Morneau using Regent Park to set up the middle-class budget of the Trudeau Government couldn’t be more stark. Regent Park is a rapidly gentrifying area of Toronto, which was built in the 1940s as a public housing project. Its residents’ median household income is just $42,000. Median household income in Canada is $70,336. Morneau introduced the 2019 budget reminding Canadians about his meeting in Regent Park, perhaps hoping that no one would notice the extreme irony at play: Morneau, worth more than $40 million, explaining to Regent Park’s kids how this budget isn’t really for them.

Regent Park kids being squeezed out of their own pool, Toronto councillor sayshttps://t.co/MUBn7GQqTB pic.twitter.com/5g1KdXLYkb

There are dozens of minor commitments that aim to spread federal money as thin as possible. For example, rather than fund affordable housing, the Liberals will allow Canadians to dip further into retirement savings, to come up with more money for a down payment. They will also allow some first-time mortgage-buyer Canadians to reduce their monthly mortgage rates by 10% through a financing scheme that will eventually need to be repaid by the homebuyer, likely with accrued interest. Not that buying a home is even possible for most Canadians, whose average debt reached 178 percent of household income last year. It’s record-high, and is on the rise.

For training and education, Canadians will be eligible for a $250 tax credit each year, to a maximum of $6,000 that they can put towards a training program. There is some new funding to expand Internet access, medical transportation in Western Canada and creating a national dementia strategy. There’s a small something for everyone, but nothing that will address systemic problems that are hurting so many Canadians.

The Liberals had signalled that this would be the budget where they unveiled their long-awaited pharmacare strategy, but again, their commitment is little more than simply creating a Canadian Drug Agency that will start to coordinate bulk purchased drugs to move towards creating a pharmacare program, presumably if they’re elected. Canada’s universal system doesn’t extend to drug coverage. A national pharmacare program would need to publicly pay for drugs for it to be an actual program.

Canada is the only developed country in the world with universal health care that does not include prescription drugs. #pharmacare #CLCLobby2019 pic.twitter.com/RxRNVNWrOz

No affordable housing measures. No national childcare system. No specific measures to reduce poverty. If their strategy is “depress expectations to wow Canadians during an election,” they nailed it.
Trudeau was elected on a wave of anti-Conservative sentiment that saw Stephen Harper’s party relegated to the opposition. He promised a new way of doing politics. He promised to help people who were hurt by the Conservatives.

Except on their final political test before the election later this year, the Liberals have failed again. This budget should have been the one where they complete their promises from the 2015 election, and look forward to what they hope will get them re-elected. But it didn’t do that. The middle class isn’t going to have their needs met. This budget wont lift anyone out of poverty.

Rather than offer anything to the middle and lower classes, the Liberals are happier to use them in their photo-ops.

Nora Loreto is a freelance writer, musician and activist based in Québec City. She’s a community organizer who thinks that hard, strategic work will bring about the revolution.

Nora is the author of From Demonized to Organized, Building the New Union Movement (2013) and is the editor of the Canadian Association of Labour Media. 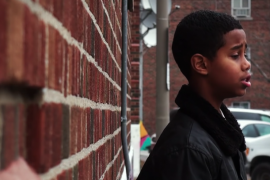 A Single Rose by Mustafa Ahmed
Higher Education and Inequality