By Allana Akhtar
Originally published on Michigan in Color

A few weeks after 9/11, I remember walking down the playground with my best friends, Maureen and Kathleen, after a tiring day of first-grade arithmetic and grammar.

I was a timid, skinny six-year-old with large brown eyes and silky black hair cut to my shoulders; my only thoughts must have been about what food will be served during lunch, the latest episode of Arthur and my newborn sister.

As we walked, I remember sensing Maureen and Kathleen being standoffish. I remember them walking a few steps in front of me, whispering to each other and looking back at me.

As the three of us convened in our usual hangout under the slide and behind the monkey bars, I quietly asked what was wrong. The two looked at each other, and then Maureen, her usually gentle blue eyes glaring at me behind her glasses, her usually pale cheeks and ears a soft pink in the September chill, spat, “Allana, it was your people that killed everyone in New York.”

I don’t remember the exact events of what followed, but I do remember my vision going dark. I remember looking around the playground and not seeing colors, only seeing the trees and sky in different shades of gray.

According to my father and faint memories, I cried throughout the rest of the day. Unable to articulate my shame and fear, and already over-sensitive, I took to quietly sobbing into my sleeve and sitting away from my peers, perhaps fearing retaliation from the rest of the class, perhaps scared I would hurt one of them, too.

My teacher took me aside during class and asked me what was wrong. Repeatedly she asked, and I only responded with more furious crying. Exasperated, she sent me to the principal’s office and called my dad.

When he arrived, I quickly recalled what had happened as the tears continued to fall down my face. He went to go tell my teacher, and they both agreed to devote the last 20 minutes of the day explaining to the group of first graders how not all Muslims are killers, how Islam is not synonymous with terror. Maureen apologized to me after class.

* * *
Years had gone by. Almost routinely we would hear stories from relatives, friends of relatives, friends of friends on their various Islamophobic attacks. One evening, my father told the story of my teenage cousins being taunted and assaulted by their neighbors while playing basketball outside; another day, my mother recounted how our mosque had been vandalized and racial slurs painted on the walls; soon after, my grandmother called my parents anxiously revealing that my uncle had been detained while visiting Chicago.

We were coming back from a family vacation in Mexico. I aged about three years but remained shy and gangly. My sister was now a rambunctious toddler and my brother walked hand in hand with my mom.

As my family and I slowly made our way through the painfully long line in immigration, tired and hungry from being on a plane for six hours, we ached to go home. Finally, our turn had come, and we made our way to the singular glass booth where a large white man, balding and barely squeezing into his baby-blue TSA button-down, meticulously watched us approach.

He took our passports and began to analyze. We stood in front of the booth as three, four, five families behind us in line had been approved by other officers and went to retrieve their luggage. My mother’s arms grew tired carrying the weight of my sister.

More agents arrived at our cubicle. They looked over my father’s passport, scrutinizing the profile of his tan skin and a black mustache.

Without giving a reason, they took us aside and said we needed to stay here a little bit longer than usual. I’m sure they assumed our dark hair and complexion, my parents’ accented English, and our last name “Akhtar” was reason enough for suspicion.

I then watched as my father, the top of all of his classes in high school and college, the first in our family to become a doctor, the owner of a thriving private practice devoted to treating patients with cancer and leukemia, lead away from us to be interrogated for suspected terrorism.

I remember my mom trying to pacify my agitated siblings while waiting patiently to hear back from the TSA. We sat on the floor of the airport (they did not offer us chairs), under the imperious gaze of a self-proclaimed Homeland Security agent (didn’t he understand that this was my homeland, too?).

An officer returned with our luggage. Immediately, he and his friend broke the locks and unpacked every item inside the bags. I watched a strange man pick apart the items in our luggage that my mother painstakingly organized for days; I watched his gloved hands touch her undergarments; I watched the others at the airport look over at us as they walked past like we were a roadside accident or a circus act.

I watched in rage as they laughed amongst themselves, ignorant to the ostracism and humiliation of my family. Their decision to racial profile was thoughtless and I’m sure they forgot about it soon after, yet they will never know the years and years of shame and embarrassment this inflicted on me.

Eventually, my father returned, his search proving null and our luggage of bathing suits and sunscreen verified as bomb-free. We returned home, my mother made us scrambled eggs, and we went to sleep.

Now I am almost 20 years old, no longer as gangly yet still timid.

As I watched stories unfold reporting the uptick in anti-Muslim hate crimes after the Charlie Hebdo shooting in Paris, the surge in online threats upon the release of Clint Eastwood’s “American Sniper” and, perhaps most haunting, the killing of three Muslim-Americans in North Carolina, these memories of mine resurface and I am forced to reconcile the profound and lasting effects my exposure to Islamophobia had on me.

Some of my most prized childhood memories have to do with my Pakistani-Muslim identity: putting henna on my palms with my cousin on the stairs of her condo for Eid, visiting my grandparents’ house in Pakistan and making roti with their housekeepers, and praying maghrib alongside my father every evening when he came back from work.

However, after 9/11 and into my adolescence, I turned my back on these features of my life that I felt separated me from everybody else. I yearned to escape from the enduring shame after being told “my people” killed nearly 3,000 lives. I ached to forget the humiliation of having to sit on an airport floor for four hours because my dad’s skin was too brown.

I detested my parents’ strict “no dating, no sleepovers, no alcohol” policy. I hid the fact I volunteered at my mosque every Sunday from my peers and soon stopped going when I no longer wanted to associate with religion. I cringed at my mother’s thick Pakistani accent when she would speak to my teachers, or the clothes she bought me that would cover up my legs and arms even in the summer.

With these instances of rejecting my culture, I blamed Islam for my own sense of estrangement in school and society. I felt that by following the culture of my peers, these instances of discrimination would cease to exist and that I could finally feel accepted. I thought that if I could use makeup to lighten my skin, wear more revealing clothing and party more often, I would stop feeling like the only brown girl in the room and being seen as such.

And now, with the onset of these larger attacks demonstrating the existing prejudice people harbor against my identity, I continue to struggle with trying to reconcile with my feelings of self-hate. How am I supposed to love my identity when people exist who vehemently express their rejection of it? How can I stop feeling like an “other,” like an outsider, when I’m constantly being viewed as one?

The truth is I haven’t yet embraced my identity. I still feel the need to use an American accent when I pronounce my last name and disassociate myself from the larger Pakistani-Muslim community.

However, I hope that maybe through expressing my feelings of estrangement, I will one day be able to come to terms with the skin and heritage I was born with.

For me, the worst part about hearing of these racist attacks is knowing they will give rise to another generation of ashamed Muslim boys and girls, who too will cry years later at the humiliation of being stopped at an airport.

“Your people” was originally posted in Michigan in Color, the Michigan Daily’s opinion section designated as a space for and by students of color at the University of Michigan. 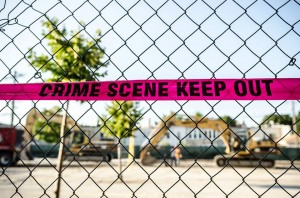 Sarah: Caretaker of the People’s Camera
Excavating Our History: What does it mean to be a Social Justice Archivist?