By William Minter and Prexy Nesbitt

Still shell-shocked by the 2016 election and now nervously eyeing November, pundits, strategists, and ordinary voters have engaged in a protracted debate on whether Democrats should focus their energies on turning out the progressive base or instead reach out to the stereotypical “white working-class” Trump voter. Even those of us who argue that this dichotomy is misleading—that we must do both—continue to puzzle over the enduring solidity of the Trump base and question whether it can ever be eroded.

Decoded, this question parallels the perennial debate of race versus class. This question points to why many white Trump supporters who do not benefit from far-right policies nevertheless seem to elevate their racial resentments above their own class interests. This dichotomy has long posed a stumbling block to multiracial, class-based organizing efforts, though there is growing consensus that organizers must overcome this false dilemma of race versus class. Two recent books provide new insights that may help organizers in sorting out what works from what is ineffective or even counterproductive. 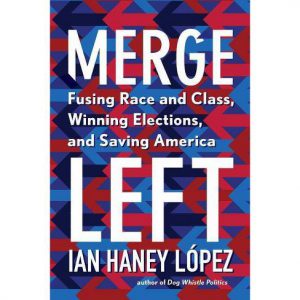 Polling and focus groups allowed López to sort the voting public into three groups – 18% are hardline supporters of far-right views;  23% consistently support progressive views; and 59% are the “persuadables,” or those who fall in between. López found that these in the middle are not “centrist,” but rather people holding contradictory views that became salient when they were presented with different messages in different contexts.

The three pillars of right-wing ideology, according to López, are views on race, class, and government. The right-wing base essentially believes that too much attention is paid to race and racial issues, and that whites are disadvantaged; that wealth comes from hard work, not unequal opportunity; and that government should get out of the way rather than creating more opportunity for all and providing a safety net for those in need.

Honed for more than half a century by powerful forces, right-wing ideology has solidified in the age of Trump, and extends its reach far beyond the minority willing to support overt white racism.

Adults in the persuadable category, meanwhile, often hold contradictory views on race. A sizable majority agree with the notion that “focusing on race doesn’t fix anything and may even make things worse,” yet many of the same people also agree that “focusing on race is necessary to move toward greater equality.”

Merge Left provides numerous illustrations of what messages can reach the persuadables by “articulating an agenda to make life better for working people, whether white, Black or brown.”  These efforts will only succeed if they are attentive to the specific realities of each person’s situation.

Accusing individuals of being racist is more likely to reinforce than to counter their racist ideology. An inclusive message communicates the realities of structural racism that a personalized challenge doesn’t.

For Prexy, the race-class narrative resonates strongly with his personal experiences in more than 50 years of organizing, particularly in Chicago, his racially divided hometown.

Prexy’s Vignettes from Chicago on Race and Class

Chicago is very segregated, especially the West Side where I grew up. But it wasn’t always that way. I remember the “mayonnaise sandwich friend” that I had. He was a white boy from the South Tennessee, I think. We both were third graders at Nathaniel Pope, the neighborhood elementary school.

We were in the park playing one day and I gave him part of my peanut butter and jelly sandwich. The next day he brought a sandwich to share with me, and he said it was a mayonnaise sandwich. I asked what was in it, and he answered, “mayonnaise.”

We both ate greedily, one half each. His family moved from the block not long after. It was years later that I realized how poor, though generous, his white family had been.

A group of Black policemen (and later policewomen) were students of my father at Crane Tech, a vocational school on the West Side. They had progressive ideas and were influenced by the Black Panther Party youth whom many of them surveilled. These were members of the Afro-American Patrolmen’s League (AAPL).

They learned on the job that they weren’t there to protect lives but to protect capital. Working the streets during Chicago’s 1968 riots, they said, had taught them that the system and their supervisors cared only about protecting buildings, cars and trucks. Even the white shopkeepers were expendable. It was the banks, realty offices, and currency exchanges that mattered and needed protection.

In the 1970s I taught a class to white policemen at the Illinois Institute of Technology. To qualify for pay advances they had to take my course, “Sociology of the Black Man in America.” They were scared of the subject matter that I taught, especially when I quoted thoughts about policing that came from their Black colleagues in the AAPL or from the Reverend Dr. Martin Luther King. Over time they stopped popping their gum and listened to my words. It mattered to them that I could understand their jobs and was concerned about the quality of their lives. Even some of the most hostile of “Chicago’s Finest” sometimes stayed late, listening avidly to all that I said.

Metzl: The cost of right-wing policies

Like Prexy’s “mayonnaise friend,” many whites, even today, are poor. Many, like the white patrolmen Prexy taught, are steeped in a racist institutional culture. Racism and far-right policies are entrenched and differ enormously by place, essential elements for organizers to understand.

Metzl’s Dying of Whiteness explores the state-level contexts in which white supporters of hard-right politicians suffer from those politicians’ policies. A sociologist and psychiatrist by training, Metzl highlights the effects of right-wing policies in three Republican dominated states.

He traces the deadly consequences for whites who continue to support right-wing policies in Missouri, Tennessee, and Kansas, highlighting their implicit racial fears.

Metzl shows that after the weakening of gun controls in 2007, rates of suicides by firearm among non-Hispanic white males grew rapidly from under 15 per 100,000 in 2008 to more than 20 per 100,000 in 2015—four times the rate of non-white males. [1] Interviewing relatives and friends of those who died, including activists who work to prevent more suicides, Metzl found a strong ambivalence and reluctance to blame guns, which remain central to white rural identity.

In Tennessee, which failed to expand Medicaid under the Affordable Care Act, Metzl interviewed whites who would clearly have benefited from Medicaid expansion. Many of them echoed the ideology of taking responsibility for one’s health and expressed disdain for the “undeserving” others who, they believed, would have been the principal beneficiaries.

However, in Kansas, which previously prided itself on its strong public education system, Metzl found pushback against right-wing Governor Sam Brownback’s experiment in cutting taxes and defunding public schools and other public services.[2]

Impact of the Pandemic

As the toll from COVID-19 provides an x-ray of inequalities by race, class, and place, it is also revealing in real time the deadly effect of right-wing Republican policies. The toll is disproportionate by both race and occupation, with the heaviest burden falling on those in high-exposure jobs.

But the fact is that whites who have supported the right-wing agenda are not spared by the virus. Despite efforts to distract attention, the colossal failure of national policies, with almost 200,000 deaths, thus creates a potential for the message that government action is in the interest of all.

Communicating this message to those who resist it, however, will require messengers who can present an inclusive approach while at the same time not pandering to racial fear.

Note: Links to books in this review are to the new nonprofit http://bookshop.org, which provides support to local independent bookstores.

A longer version of this review was previously published on Medium.

[2]           Brownback resigned before the end of his second term, with one of highest disapproval ratings among all American governors.

Prexy Nesbitt is a Presidential Fellow in Peace Studies at Chapman University. William Minter is the editor of AfricaFocus Bulletin. 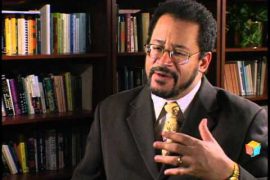