In 2011, my partner at the time and I broke up after ten and a half years of being together and my world fell apart. I was devastated, but it gave me the opportunity to do something I had meant to do for a while. I grew up in Pakistan and immigrated to the United States at the age of 17. Since then I had only been back home two times. On these trips back home, I didn’t experience a sense of belonging that I was hoping for, instead I faced relative upon relative asking me why I was not married yet. You see, heterosexual marriage is an extremely important cornerstone of the Pakistani society. After both visits, I came back to the U.S. deflated and dejected and slowly re- immersed myself back into the queer world here. In my mind, these two worlds of mine sat distinctly apart: my queer U.S. world and my Pakistani world filled with annoying Aunties.

Since September 11, things in the U.S. had been getting progressively worse as Islamophobic policies implemented here and abroad left my communities torn and traumatized. Anti-Muslim rhetoric had also been adopted by many in the LGBT mainstream community, and after living for years with this kind of marginalization within an already marginalized community, it began to take a toll on me. I needed to see that Pakistan was not what the West imagined it to be, that it was possible for me to find a space for someone like me there, that I could go back and remember my history and rich cultural traditions that no one seemed to care about here.

Thanks to the existence of an informal global South Asian LGBT network, I had started meeting Pakistani queers as far back as 2004 who either lived in Pakistan or had spent significant time there. Dominated as this network is by Indians, I carefully filed away in my mental catalogue any Pakistanis I would come across as a promise of a future for me in Pakistan. I was so inspired by them because I was ready to see another side of Pakistan – the queer and trans* side of it. In 2012, I finally took the plunge, booked a ticket, packed my suitcases, and went to Pakistan for the first time by myself. I didn’t stay with family – an anomaly for someone from Pakistan who is traveling to Pakistan – because I wanted to know if I could have an independent relationship to Pakistan, and if I could be gloriously queer there. Over the course of the last four years, I have gone back on my own to Pakistan five times and everything I thought I knew about Pakistan has changed for me. In 2012, I told my coming out story for the first time in Urdu wearing a shalwar kameez. That moment – and all the subsequent moments spending time with LGBT people there and doing the everyday things like going to the bazaar to shop for blingy things (Pakistan is full of bling), hanging out at the beach in Karachi or at a cafe, and frequenting the tailor to get clothes stitched for my mom and me – made me realize that that the schism in my mind that separated my queerness from Pakistan had completely dissipated.

I have also realized that this back and forth existence, across oceans and continents, comes with its own heartbreak. Every time I go, I want to scrub my brain clean of all the Western rhetoric about Pakistan that I am bombarded with living in the west: terrorist haven, failed state, anti-woman, certainly anti-LGBT, and the list keeps going until you are convinced that you will be blown up the moment you land in Pakistan! By this same logic, one could argue that if you go to a movie theatre in the U.S., you will get shot. But thanks to the exportation of propaganda, including Hollywood’s idealized depictions of the U.S., people around the world see many aspects of U.S. culture, not just news about the mass shootings here. But what do most people living here know about Pakistan besides the warped, purposefully biased and war-aligned stereotypes propagated by the mainstream media?

Since 2012, I now go back home every year as a pilgrimage to remind myself of where I come from and to assuage, if only momentarily, the heartbreaking experience of living in the U.S. as a Pakistani immigrant. I understand the connection between British colonialism in South Asia that is forever connected to the current neo-colonialism of the West, which perpetrates and propels the rhetoric that Pakistan and Pakistanis are expendable. To neo-colonial interests, we are only relevant as pawns to advance the strategic interests of the West. Going back to Pakistan means finding inspiration from the way the Pakistani LGBT community creates a space for itself, pushing against the norms but also working within their cultural context, and rejecting Western models of LGBT mobilizing

The Khwaja Siras, who have been part of our culture for centuries, not only won the official third-gender classification handed down by the Supreme Court in 2011, but were also granted the rights to vote and run for office. Although marginalization of Khwaja Siras remains (the recent death of Alisha, a transgender activist in Khyber Phaktunkhwa who was shot at and then left untreated at the hospital is a painful reminder of this), these legislative victories are significant. The emergence of new trans* identities, a recently concluded annual Aks festival highlighting films, and art by and about minorities including LGBT communities are other examples of the Pakistani LGBT community creating space. These new victories amplify the local historical contexts within which gender and sexual diversity has flourished in South Asia. One example is a shrine in Lahore that celebrates the love of two men (Madhu Lal and Shah Hussain). When coming into this community, one important thing I have to remember is to take off the Western lens, otherwise I won’t be able to capture the depth and breadth of the LGBT community in Pakistan.

In Pakistan, I cannot separate the struggle for LGBT rights from the legacy of colonialism or the impact of the war on terror. Section 377 of the penal code – the anti-sodomy law– was enacted by British colonial authorities who created a system of intense inequality rooted in the racial “superiority” of Europeans. The British Empire depleted Pakistan’s vast resources for the benefit of European capital, creating long-lasting divisions, and hatred amidst the people they ruled. This, in turn, led to the emergence of nation states – India, Pakistan, and Bangladesh for example – based on fraught identities. Religious fundamentalism coupled with a very powerful military have been used to build a strong Pakistani nation state at the cost of minorities including LGBT people. This was something I experienced first hand growing up during one of the harshest military regimes in Pakistan, that of general Zia-Ul-Haq. In his push to “Islamasize” the country and to create a stronger nation state, he threw women’s rights under the bus in the name of Islam. Sadia Toor, in her essay “Gender, Sexuality, and Islam under the Shadow of Empire,” writes about the notorious Zina Ordinance:

“The Zina Ordinance was part of the Hudood Ordinances, promulgated by Zia ul-Haq as the cornerstone of his Islamization program in the 1980s. Zina means illicit sex in Arabic, and the Ordinance essentially turned ’illicit sex’—adultery as well as premarital sex—into a crime against the State. While removing the category of marital rape entirely, it put the burden of proof for rape on the victim. Thus, if a woman charged a man other than her husband with rape, but could not produce the ‘four adult male Muslim witnesses of good moral character’ that the law now required, she had nevertheless admitted to having sex with a man other than her husband and could be convicted under the Zina Ordinance.”

In order to have a more powerful country, Islam was used as an agent for centralizing power as the conflation of nation state with religion has been a long-term project in Pakistan. The Pakistani government and the military have continued to erode the rights of minorities bolstered by the growing influence of Saudi Arabia as it continues to export a fundamentalist brand of Islam. This is juxtaposed by the West’s prolonged wars/occupation within “Muslim majority” countries making the West very unpopular within Pakistan. As long as LGBT rights are viewed within a Western lens, they will seem unachievable.

Amidst all this, the Pakistani LGBT community is figuring out its own way through different platforms of engagement. I have seen this manifested through art and culture, like the immensely successful theatre production Teesri Dhun featuring stories of trans women and performed by trans women as well as through engaging the government via the public health lens of HIV/AIDS work,and through feminist agitating and organizing.

During my last night in Pakistan a month ago, in the balmy and salty Karachi night, a group of young people including queer folks picked me up in a tiny car and drove us to a chai and paratha place where we sat in the space allocated for men only. Between cigarettes and chai, we talked about how one of the young women found it so easy to date other women, about art, and about a project some of them are working on that seeks to increase women’s visibility in public space. I went home that night thinking how Pakistan continues to blow my mind in the most amazing ways. I feel so hopeful for the future and can’t wait to go back and continue to develop my own role in this complicated and beautiful country: my Blingistan.

Urooj was born and raised in Karachi, Pakistan and immigrated to the U.S at 17 and  has had eighteen years of experience organizing within LGBTQ communities of color, especially addressing issues of Islamophobia, violence, sexism, transphobia, and ageism. Urooj is the Associate director, International Youth Health and Rights at Advocates for Youth, where she manages a project of the International Division that builds the capacity of youth-driven organizations in the global south. She is a steering committee member of the Muslim Alliance for Sexual and Gender Diversity (MASGD), which addresses the intersectional impact of Islamophobia, homophobia, and transphobia. Urooj has been a member of the Center for American Progress’ Women’s Health Leadership Network and its Faith and Reproductive Justice Institute. She is currently on the Kalamazoo College Arcus Center for Social Justice Leadership Global Advisory’s Board and the Astraea Lesbian Foundation for Justice’s Board. Urooj was selected to serve on the U.S delegation to the 59th Session of the United Nations Commission on the Status of Women. Urooj is the recipient of several awards including the National Queer Asian Pacific Islander Alliance’s 2012 NQAPIA Community Catalyst Award and the Young Women of Color HIV/AIDS Coalition’s We Speak award.

Linguistics in a Colonial World: A Story of Language, Meaning, and Power
Roderick Ferguson: Socialism in Black Queer Time 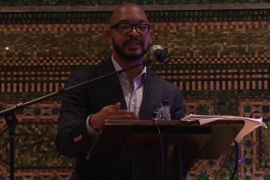