By Naiara do Rosário

Brazil’s social structure was forged through over 300 years of slavery. Racism is, to this day, an important cornerstone in building and maintaining capitalism in our country, which finds in the exploitation of the poor and working class an important way of accumulating capital. When we talk about the Brazilian working class, we are talking about a population of majority Black people who live far away from urban centers. The exploited poor are forced to deal with inadequate urban structure and are targeted through the war on drugs, which is actually an excuse used by the state to justify mass incarceration and the genocide of Black youth. Racism is a veiled justification to explore and oppress the people.

This thread also honors Black women radicals who were assassinated for their activism. #blackwomenradicals pic.twitter.com/CBrJ8bim5u

May 13, 2018, marked the 130th anniversary of the abolition of slavery in Brazil. Symptomatically, it was also the year of the brutal execution of city councilwoman Marielle Franco, a socialist Black woman who had been raised in a favela and who fought for the rights of other Black people from favelas. Under a neoliberal capitalist system, Black people are the first to suffer a withdrawal of their rights, increased violence and unemployment. All this makes one wonder:  how can we achieve true freedom?

We understand that many have struggled for liberation before and after abolition in Brazil. However, much more is still necessary in order to fight centuries of exploitation, ideological domination and oppression. Karl Marx said that the existence of exploiters and the exploited is not enough. An education which legitimizes this exploitation is also necessary. In our case, the fate for poor people is built in our public schools, with structures similar to prisons: bars on all windows and locked gates in all facilities. Rows of desks are filled in overcrowded classrooms with the bodies of young people who are trained for blue-collar work and will remain shrunk in desks into their adulthood in call center jobs. The school environment is completely damaged, teachers’ work conditions are precarious, teaching material largely ignore the historical struggle of Black people and Indigenous communities, and the curriculum increasingly limits space for critical debate.

Rich (and mostly white) people, on the other hand, go to the best private schools and later gain entry to public universities, which make the best doctors, engineers, politicians, economists – the elite that will govern the country. Meanwhile, the poor keep being shaped into cheap labor. The ideologies behind all this is meritocracy and individualism. We are taught that it is very possible to become rich in Brazil, providing you make an effort and earn it. This myth completely ignores the crushing realities of social inequality.

So the last couple of years I've seen Paolo Freire dismissed because he was a "progressive". Now that Brazil is about to elect a real life fascist I'd say he's a lot more important than your latest meta-study on silence in hallways… pic.twitter.com/NiC7HFNqjL

It is therefore necessary to engage in popular forms of education to reverse these imposed logics. We require critical and radically democratic education, forged with with the masses and their experiences, which bursts the dominant ideologies. We need transformative education, based in dialogue, solidarity and collectivity. Through a critical comprehension of the world we live in, education can help us understand our social locations and mutual exploitations. Through these understandings, we can resist and ultimately destroy the capitalist and white supremacist ideologies and bring forth true emancipation for our people. With this orientation, we can achieve education as practice for freedom, bringing up women and men who acknowledge the commitment of building a free country and a free world for everyone.

Naiara do Rosário is a 25-year-old Black woman living in the district of Pirituba, in northeast São Paulo pursuing a Bachelor’s degree in pedagogy. She became a social activist at the age of 19, during the June 2013 protests, which led hundreds of thousands of people to Brazilian streets against the rise on public transportation fares. She engaged in student activism and in housing-rights movements and, in 2015, became a coordinator at Rede Emancipa, a social movement for popular education in low-income areas of many cities in Brazil, gathering mostly Black, marginalized youth. The organization provides preparatory courses for university admission exams, accessible early childhood education, popular education for incarcerated people, youth and adult literacy program, sports programs, cultural activities such as music and arts gatherings, poetry slams and food collection campaigns. Naiara now works as an assistant to the young, militant, feminist congresswoman Sâmia Bomfim and as an activist with PSOL – Partido Socialismo e Liberdade (Socialism and Liberty Party). 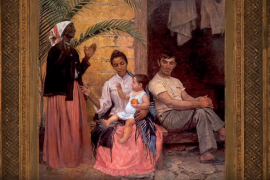 Too black for Brazil | Guardian Docs
Anthropology of the Middle East