Cephus “Uncle Bobby” Johnson is no stranger to the anti-police brutality movement. Johnson lost his nephew Oscar Grant on January 1, 2009 in Oakland, California, and has been actively combating police terrorism ever since.

In a recent interview, Johnson broke down his methodology on building an effective movement against police violence and changing legislation in five steps.

1. Identify, Unify, and Rally
Unifying families is critical in this movement. Collective voice will always be more powerful than just one. When families begin to share their stories they may find a lot of similarities and also many differences that can provide more information. Families also begin to bond, share resources and experiences with each other which is an important part of the healing process. Families who are now connected have expressed feeling less depressed and isolated than when they did not know other impacted families. As families unify, it’s also critical to publicly demonstrate. The community should hear families’ pain; especially empathetic elected officials who may be prompted to act in the interest of human rights.

Families who are looking to meet other families can join the Families United 4 Justice Network, which is a growing nationwide collective of families impacted by police homicide co-founded by Johnson. 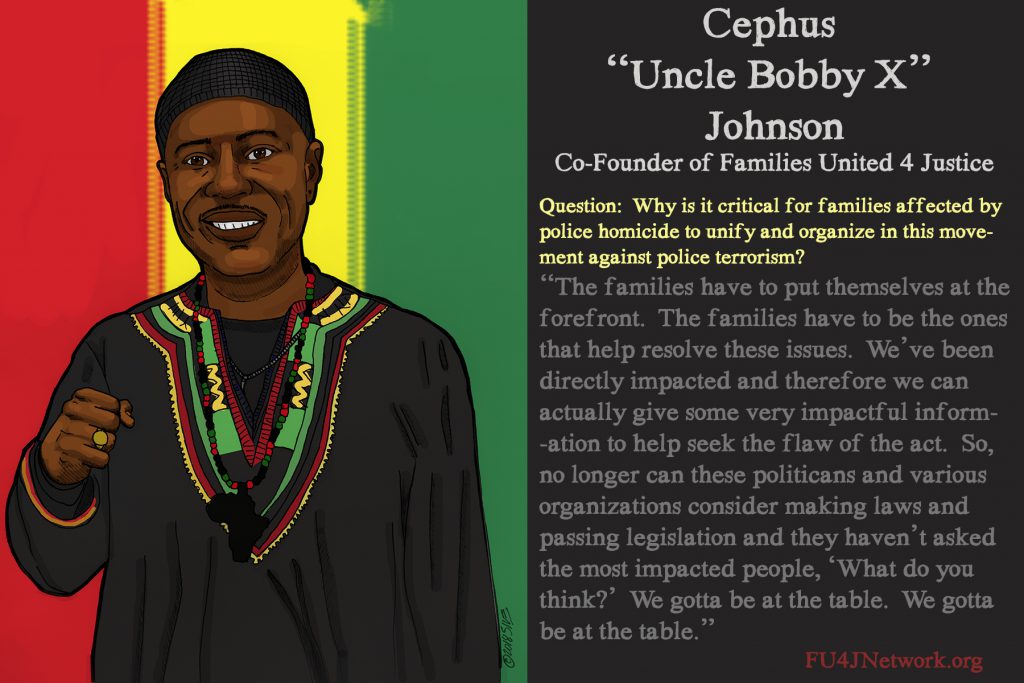 2. Look at the Data
While focusing on legislation, Johnson came to realize that in terms of accountability and transparency, California is considered one of the deadliest states in the nation. Due to the Peace Officer’s Bill of Rights, officers’ records are sealed from the public and officers have special protections when they’ve participated in misconduct. The legislation – which has expanded over time with the support of California police unions – has created a hard wedge between the community’s trust and the police. Thoroughly studying this legislation enabled California families and supporters to identify their next plan of action. Families and supporters organizing outside California should learn from this example, and comb through what data and records are available to the public, and what legislation looks like to inform themselves of steps to take in fighting harmful legislation.

3. Build Coalitions and Network
While organizing families is critical, in order to effectively impact legislation, the families network must expand beyond its inner circle. Building with organizations who are sympathetic to the cause can help accelerate movement building, as different organizations can offer various support, connections, and platforms. All the legislative changes California families have helped to pass were fueled by coalition efforts.

“AB 953 (Racial Identity Profiling Act) was a serious effort led not just by families but all types of different agencies within the state of California, [we] became a coalition. People stayed up at the capitol for days, and took turns sleeping there.” —Johnson

In 2015, California families and their coalitions helped pass two critical pieces of legislation that address police transparency. AB-953, the Racial Identity Profiling Act, requires police departments to record and share various data on police interactions, like why an individual is stopped, and the individual’s demographic information. This bill provides the public disaggregated data that reveals who is being apprehended and why. The other legislation, AB-71, provides data on officer-involved shootings (OIS) including the quantity of OIS’s and details of each shooting. For the first data collection year, 2016, 1,729 incidents were reported, 327 of which involved civilian deaths. In 2017, 1,687 incidents were reported, including 391 deaths. This critical information would never have been revealed had it not been for the families and their networks of supporters.

4. Lobby and Connect with Sympathetic Elected Officials
Each one of these legislation campaigns also requires identifying elected officials who could be sympathetic to the cause, as they will be responsible for writing and signing the bill. Passing legislation is a long and arduous process. For example, SB-1421 is legislation mandating all California police departments to release records related to use-of-force incidents and police crimes. While it passed this year, it failed to pass previously, and the coalition utilized its connection with Senator Nancy Skinner to rework the bill and try again.

5. Place Impacted Families at the Forefront
Johnson emphasizes the importance of strategically placing impacted families where their voices can make the most impact. While pushing for SB-1421, 20 to 30 families were continuously involved in lobby days where they, along with other organizations, traveled to the state capitol to talk to various senators and share their experiences. The coalition made sure to prioritize impacted families at the forefront at demonstrations and lobby days so that the heart of the legislation could be understood from the perspective of people most impacted.

“The priority in the room that spoke were the families impacted, because we wanted to be upfront and in their face so that they can actually have firsthand knowledge and witness the emotional pain that families struggle through when their loved ones are killed. And I think that was so effective, that many began to turn our way. Then we began to hear particular politicians like Senator Bradford, Senator Mitchell, begin to admonish police agencies when they were trying to water down what we were saying is pain. So we knew then we had something going on where we began to hear politicians now expressing the pain that we had expressed to them and so we just rolled with that.” —Johnson

Families and communities fighting for police transparency and accountability should expect pushback from the police. In response to these legislative changes, some California police departments have been shredding internal affairs documents to avoid disclosing details of use-of-force and police crime investigations. The movement towards progress is gradual, and setbacks are inevitable, but as the frontline community acquires a national platform, the American perspective on policing will evolve. These crucial lessons from Cephus Johnson can provide a roadmap for organizers to continue to build a mass movement that will bring about the necessary changes our society needs to end injustice committed by police.

Nissa Tzun is a multimedia artist and journalist, community organizer, family advocate and professor. In 2009, Nissa founded the Forced Trajectory Project (FTP), a documentary project illuminating the narratives of families impacted by police homicide. FTP has been exhibited across the nation and has received numerous awards and recognitions. FTP has expanded into a media organization with 25+ members, serving as an internship for undergraduate Journalism & Media Studies students at UNLV and providing media training to impacted families and community organizations. From 2010-2016, Nissa spearheaded the Justice for Kenny Coalition along with Jennifer Gonzalez, the partner of police homicide victim, Kenny Lazo. Justice for Kenny would be the longest running Long Island anti-police brutality coalition to date, uniting impacted families and providing media training to local community organizations. In 2014, Nissa supported the inception of Families United 4 Justice (FUJ4), a nationwide collective of families affected by police violence. Nissa and her team have raised $50,000+ to subsidize 150+ family members affected by police violence to convene at FU4J’s first two national gatherings in Detroit and Oakland. Nissa’s other works include documenting the aftermath of the 2010 earthquake in Haiti and the movement for sustainable solutions for Haitians. Nissa publishes on ChangeWire.org and ArtsEverwhere. She currently teaches at the Hank Greenspun School of Journalism & Media Studies, works for the UNLV Division of Student Affairs and is pursuing her Masters in Social Work and Journalism & Media Studies. 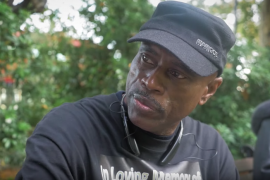