I never watch the Emmy Awards. Never! But last night I settled down in front of the television because several incredible black actresses were nominated. To be perfectly honest, I subjected myself to what felt like ten hours of bad jokes and annoying ads because of these gifted black actresses, and it was completely worth it.  As a black woman, I was excited and proud to see them all gain recognition from the mainstream media machine, and when Regina King, Uzo Aduba, and Viola Davis were announced as winners, I was ecstatic.  That moment when presenter Taraji P. Henson gave Regina King an extra-long Sistah-hug on stage, in front of millions of viewers, captured the essence of black pride I felt last night.

There has never been a time when there have been this many primetime mainstream lead roles for black women, among them, Viola Davis as Annalise Keating on How to Get Away with Murder (HTGAWM), Taraji P. Henson as Cookie Lyon on Empire, and Kerry Washington as Olivia Pope on Scandal. It is significant that these shows are not on BET or TVOne (or the defunct UPN network) where major black audiences have easy access to them. Instead, these shows have inserted themselves and their stories into the consciousness of mainstream America. As I tell my students every year, you cannot underestimate the power of pop culture.  When friends and acquaintances of varying ethnicities talk excitedly about these characters, I feel myself nodding as if these women are my sisters. And, I will freely admit, there is something that happens deep in my spirit when I watch my daughters and son watch these shows. I feel a sense of pride that they are able to see these beautiful complex characters played by strong black women who lead their respective shows with such talent and brilliance.

The shows are great, the scripts are superb, and the acting is stellar.  But I will be honest and say that black pride is perhaps the main reason why I love these shows. More and more in this society, we are made to feel guilty about any bursts of black pride. For instance,  #BlackLivesMatter is often angrily amended to #AllLivesMatter because somehow, a focus on black pride is negative and detrimental to the ideal of humanism.  It is better, society tells us, not to make too much of blackness because that might make others feel uncomfortable. The only time we can truly expand our peacock feathers is during black history month, and even then we are constantly responding to snarky comments about why the month is necessary and why there is no white history month. 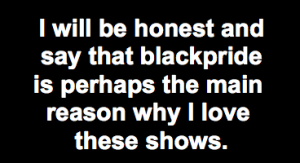 A conversation in my classroom some years ago captures this predicament. We were discussing President Obama’s victory after the 2008 election and a white student, clearly bristling at the pride that was bursting from the black students in the class, suggested that the president only won because black people voted for him.  In other words, he continued, black people voted for him because of his color and not because of his candidacy. The young man’s statement was one that questioned black folks intellectual abilities while belittling the momentous pride that black folks felt with electing their first black president—someone who looks like them and identifies as one of them. A black female student responded with a question: “Did all the previous white presidents win because they were white?” she asked. In other words, over these last hundred years, have white people voted for their presidents because their candidates are white? Smiling to myself, I moved the discussion along but have thought about it a lot since then.

The truth is that although the young woman asked a rather clever question, one cannot simply turn the question around.  White pride is different from black pride because the white experience in America has been so dramatically different from the black experience.  As I anticipated the 2015 Emmy Awards, I suspected that white women did not necessarily feel a huge sense of pride that six white actresses were nominated for best actress in the comedy category, nor did white men feel a need to puff out their chests because six white men were nominated for best actor in a drama series.  And yet, here I am, thrilled that these women are nominated and proud that these nominees, along with Kerry Washington and others, are “killin’ it” on major mainstream television networks.  It has everything to do with my position as a black woman.

A lot has been said/written/blogged about how these characters are not the ideal characterizations of black women. They are not perfect heroines and are often characterized as the “angry black woman.” In short, they are not Claire Huxtable.  Olivia Pope is having a long drawn out affair with a married man; Annalise Keating is tough and seems coldhearted, and Cookie is ruthless and materialistic.  All true.  But let me explain why I love them regardless. They are all flawed yet completely “flawless,” to use Beyonce’s definition of the word.  They take care of their people, they troubleshoot their way out of their problems, they love fiercely, they work hard, they persevere through trials, they laugh, they cry, they throw tantrums, they fall, and they pick themselves up, brushing off the dust from their beautiful black selves.  These three characters have received criticism for their physical appearance—their hair, their clothes, their walk, their talk—and they have responded by doing it bigger and turning the volume up.

These television characters and the black women who play them are critically important to a whole generation of black men and women because black characters are so often portrayed as the most undesirable, troublesome element in the United States.  This is the age of Mike Brown, Sandra Bland, Rekia Boyd, Trayvon Martin, and the list goes on and on.  For my own three teenagers who are being raised in a predominantly white community, these characters on primetime television remind them of what is possible.  As Barack Obama did in 2008 and 2012, Olivia Pope, Viola Davis, and Taraji P. Henson are inspiring a whole generation. That they are women is particularly significant because, in this society, black women bare the two strikes of being black and female.  Whenever I see Olivia, Annalise or Cookie strut their stuff, I think of Nina Simone’s character Peaches in her song “Four Women,” a woman who is steeped in history, who emerges beautifully and powerfully as a product of a tough environment.

These characters are just as important to the mainstream, and the world is finally compelled to watch, comprehend, and digest these novel depictions of black folk.  Recently a colleague told me that a visiting Chinese student had expressed surprise when she had made friends with some African American students.  She grew up in China and had always heard that black people in America were “dirty and dangerous.”  I was saddened to hear similar stereotypes about African Americans from Nigerians when I visited last summer. Therefore, the importance of these complicated unconventional roles and shows – and their dissemination across mainstream and global media sources – cannot be overstated. It is not surprising that all three shows are created primarily by black writers—Shonda Rhimes, Lee Daniels, and Kenya Barris. Their experience as African Americans and the history that has informed this identity gives them a sense of urgency and determination in bringing remarkable stories about black folk to a wide audience.

So last night, I watched the Emmys with unabashed pride.  If the Emmys would let me vote, I would have insisted on putting Kerry Washington on the ballot. I would then struggle with whether to vote for her, Taraji P. Henson, or Viola Davis, not only for their tremendous talent but also for the value that they bring to scores of young black women and men as well as the wider society.  Viola’s win was so meaningful. Her brave acceptance speech will replay in my head for a very long time. 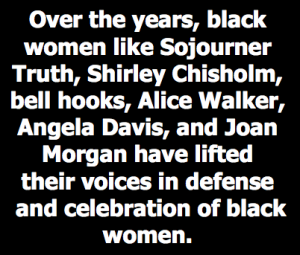 Don’t blame me for this pride, folks.  You’ve all felt some sort of pride connected to a part of your identity, even if it is not ethnic pride.  When the US competes in the Olympics, a sense of national pride is anticipated and encouraged.  It is the same way with me and these ladies.  Over the years, black women like Sojourner Truth, Shirley Chisholm, bell hooks, Alice Walker, Angela Davis, and Joan Morgan have lifted their voices in defense and celebration of black women.  In many ways, they’ve been preaching to a grateful choir.  Shows like Scandal, HTGAWM, and Empire and characters like Olivia, Annalise, and Cookie are adding more and more choristers each week. As audiences tune in across America and the world, this triumvirate of shows is finding and converting an erstwhile reluctant and skeptical congregation.  If we have learned anything recently, it is that in this so-called “post-racial era,” attitudes and perceptions will only change when the value and contribution of black culture and identity to American life is more fully understood, acknowledged, and appreciated by all.