On October 29, 2018, Albert Ramon Dorsey was murdered by the Los Angeles Police Department (LAPD) while completely naked and exiting the shower inside a 24-Hour Fitness center in Hollywood. Employees called the police on him, first alleging that he was a “transient,” then asserting that there had been a verbal altercation, and finally claiming some incident from days prior justified their call. This is the second time in less than two years that employees at this second-largest gym chain have gotten Black members killed by police in Los Angeles. In March 2017, employees called the police on Dennis Todd Rogers, citing their “discomfort” with the 41-year-old father. While these private employees did not pull the trigger in either case, no one can claim to be unaware of the potential for an interaction between Black people and police to result in Black death.

On 10/29 Albert "Ramon" Dorsey aka Mello (30) was shot and killed in a gym locker room by LAPD. To know him was to love him, best described as the "Gentle Giant" he would give his last and his all to help another person succeed. https://t.co/Eh9f8IaxFb#BlackLivesMatter pic.twitter.com/h28ZRaK1Gs

The Black Lives Matter movement has been hugely successful in raising awareness around the way in which Black people are “systematically and intentionally targeted for demise” by police. Many are familiar with the ground-breaking study of the Malcolm X Grassroots Movement which found that Black people are killed every 28 hours by police, security, or vigilantes. Over the last three years, since Donald Trump’s candidacy, we have experienced the greatest increase in hate crimes on record, especially in urban centers. The violent attack on the immensely popular Black queer actor, Jussie Smollett, in Chicago is most illustrative, with attackers hurling racist, homophobic remarks as they poured bleach on him and attempted to place a noose around his neck. In the midst of their attack they yelled “This is MAGA country!” referring to Trump’s slogan “Make America Great Again.” As the violent attacks on Black people are pushed to the fore of our collective consciousness, we have been programmed to believe them to be the work of a few white extremists, poorly trained police, or maybe even a few “bad apples.” What is missed is the systemic and intentional nature of it all and how white-supremacist capitalism condones, benefits from, and even requires violence against Black people.

In his seminal book Black Marxism, Cedric Robinson builds on the work of Oliver Cox, W.E.B. DuBois, CLR James, and Richard Wright, when he analyzes the concept of racial capitalism, arguing that capitalism does not simply require racism, but that racism (or racialism) actually predates capitalism and that the two are interlocking systems. In short, racism is not simply a tool necessary to make capitalism viable, but is a co-equal leg of an oppressive system. Racial capitalism means that the economic system and the racial hierarchy reinforce one another, embedding ownership and working classes. But there is no fluidity; the people along these strata are static. We don’t simply live in a racialized system, or even a racist system; we live in a white-supremacist system. White folks are at the top and Black folks at the bottom, with white wealth requiring Black exploitation. None of this is a groundbreaking revelation. It is very apparent that, save an Oprah here and a Jay-Z there, all the rich folks are white, and Black folks are mostly broke. What is less apparent, though, is why and how these positionings connect with state violence.

At 24hr Fitness in Hollywood protesting the murder of Albert Ramon Dorsey by LAPD pic.twitter.com/1PfweePqc4

The popular narrative around state violence and the police killings of Black people is that they are individual instances—some justified and some warranting protest. Government agencies and mainstream media, in the interest of White-supremacist capitalism, engage in what Thandisizwe Chimurenga calls “double murder,” the killing of the body followed by the assassination of the character. As Manning Marable outlines in How Capitalism Underdeveloped Black America, we didn’t just stumble into this process. The systems that are constructed were intentionally developed to produce outcomes that hasten white-supremacist, capitalist profit. American policing was constructed to be a tool to advance the interests of the white ownership class. Policing is a direct derivative of paddy-rollers and slave-catchers, who returned formerly enslaved African people who dared to take their freedom back to their alleged “owners.” Parallel practices by contemporary police place targets on the backs of Black bodies and continue to protect the interests of white owners.

When two LAPD officers entered the gym locker room at 24-Hour Fitness, they were invited in by corporate practices that viewed Albert Ramon Dorsey’s 6’1”, 300-pound frame as a threat to white fragility. White-supremacist capitalism saw Ramon’s presence as infringing on the comfort of white (and compliant non-white) patrons, and, as such impeding their profits. Rather than allowing Ramon to finish showering and dressing, and taking the logical next step—leaving—white-supremacist capitalism deemed it much more efficient to simply extinguish Ramon. 24-Hour Fitness commissioned police to send a message to Black people—much like slave-catchers and overseers sent messages to enslaved people—submit, or be killed. The message was also one of solidarity among the white ownership class, and extended to whites of every class, affirming their position on the racial hierarchy. Each outcome more deeply entrenches white-supremacist capitalism and the place of corporations like 24-Hour Fitness within it.

So while attention on the policing system and reimagined visions of public safety are necessary endeavors, Black liberation requires that we examine the larger systems that require and benefit from police violence. Justice for #AlbertRamonDorsey and #DennisToddRogers…and #JohnCrawford, #SkyYoung, #KajiemePowell, #YuvetteHenderson, and so many others comes when we demand more than individual officers be fired and charged. Justice is even bigger than making sweeping reforms to entire police departments. Justice means getting to the root of it all and undoing the white-supremacist capitalist system that prioritizes corporate profits above the lives of Black people.

Melina Abdullah is a womanist scholar-activist. She earned her Ph.D. in Political Science from the
University of Southern California and serves as Professor and Chair of Pan-African Studies at CaliforniaState University, Los Angeles. Dr. Abdullah is a leader in the fight for Ethnic Studies in the K-12 anduniversity systems. In 2013, Melina was among the original group of organizers that convened to form Black Lives Matter and continues to serve as a Los Angeles chapter lead and contributes to the global leadership. Melina is co-host and co-producer of the weekly radio program Beautiful Struggle on KPFK and hosts and produces the internet radio show “Move the Crowd” on Radio Justice. She regularly contributes to print and broadcast media and is featured in the films 13th , When Justice Isn’t Just, and Justice or Else. She is widely published in academic and popular outlets. Melina is originally from Oakland, California, is a single “soccer mama” of three children, and resides in Mid-City Los Angeles. 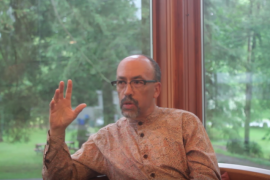