As usual, fierce and powerful Black women, Indigenous women and women of color are leading the movement against police violence. Unfortunately, also as usual, women and trans people of color’s own experiences with police violence have, for the most part, not made mainstream headlines over the past 6 months, served as a national rallying cries, or driven demands for change.

Their names have not rolled off the President’s tongue or popped up in the pages of People magazine. But we have said them, repeated them to each other, blogged about them, testified about them to a Presidential Task Force, insisted their names be read at rallies, and demanded that their stories, and countless others like them, be at the center of this moment and of this movement.

In conversations about racial profiling, we are continuing to raise the reality that racial disparities in stops, searches, and arrests are the same for women as they are for men, and that racial profiling of women of color – including queer and transgender women of color – takes gender specific forms, based on stereotypes rooted in slavery and colonialism, in the context of the war on drugs and the enforcement of prostitution and trafficking laws.

Our experiences of racial profiling and police brutality are not aberrations or distractions from the main event, which features cisgender, heterosexual Black men, and men of color as the prime protagonists. They are central to our understanding of the impacts of policing on our communities and to the solutions we pursue. Gender-specific forms of police violence are so often invisible in mainstream discussions, such as the silent epidemic of sexual violence by police that remains in the shadows. Sexual misconduct and rape by law enforcement agents is the second most frequently reported form of police violence after excessive force. One study found that 2 in 5 women of color report sexual harassment by police, another that 9 out of 10 trans women of color had faced extortion of sex by law enforcement agents.

Young women of color, low income women, lesbian and trans women, and women who are – or are perceived to be involved in the drug or sex trades – are particularly targeted for sexual violence by police. Tiawanda Moore, a young Chicago woman sexually harassed by police responding to a domestic violence call, who was then sexually harassed by the police she complained to, only to be prosecuted for recording their overtures, is just one of many people whose stories we don’t know. Sexual violence by law enforcement is not an anomaly, the product of individual acts by “bad” officers, but, as Andrea Smith explains in Conquest, it is a central weapon of policing rooted in colonial domination and chattel slavery.

Police violence also includes brutal, racialized, violent and degrading strip searches, such as the one Diane Bond, a middle aged Black woman living in Chicago’s Cabrini Green public housing complex, was subjected to in her own home or the unlawful and humiliating “gender searches” to which women, gender nonconforming and transgender people of color are routinely subjected to assign gender based on anatomy. Or the policing of motherhood which led NYPD officers to drag Denise Stewart, a middle aged Black grandmother, half naked into the hallway outside of her apartment on the presumption that she was abusing her child. Or the denial of reproductive health and safety of pregnant women of color who have been shocked with 50,000 V of electricity by police TASERS, often pointed directly at their bellies.

It is particularly important to our understanding of both police violence and carceral feminisms to recognize that the role played by law enforcement agents in enforcing racialized gender norms and power relations does not change when their role shifts from enforcers roaming the streets of our communities to “protectors” responding to violence. A significant proportion of police violence against women and trans people of color takes place in the context of responses to calls for help. Police response to domestic violence all too often proves deadly to women and trans people of color like Janisha Fonville, recently killed by Charlotte police responding to a call for assistance during a fight with her girlfriend, or Aura Rosser, killed by Ann Arbor police, also responding to an incident of domestic violence.

Reliance on police to respond to violence frequently results in further brutality against trans and gender nonconforming survivors, as was the case when a Chicago police officer responding to a domestic dispute threw a Black trans woman against a wall and to the floor, breaking her wrist. Or they create opportunities to prey on survivors, as did one officer in a Chicago suburb who forced domestic violence victims strip for him. These are the hands into which carceral feminisms would have us entrust our safety.

The same race, class, gender, and sexuality based stereotypes at play in daily law enforcement interactions with women and queer people of color inform who, on the one hand, is deemed worthy of police protection, and who, on the other, will be subject to arrest, abuse, or denial of protection. The lines around who is a legitimate victim of violence are highly racialized, sexualized, and classed. They are not only lines of exclusion; they are lines along which law enforcement officers enact violence in the name of fighting violence. The more abhorrent we consider the violence we seek to address – sexual offenses, trafficking in persons – the more we are willing to turn away from and ignore the casualties of our reliance on law enforcement to address it, which all too often include the very people we claim to protect.

Since Angela Davis’ historic keynote at its founding conference in 2000, INCITE! has always been a place where the names of Indigenous women, Black women, and women of color killed and violated by police have been spoken; where gender and sexuality specific forms of state violence – be they on the streets of New York or Tel Aviv – have been named; and where the relationship between the violence committed against women of color by the state, and the violence we experience in our homes and communities, has been articulated and formed the basis for action.

What would it mean for broader anti-violence movements and movements for police accountability and abolition to say these names, recognize these statistics, and acknowledge these forms of police violence?

Bringing women and trans people of color to the center of the conversation around policing means the organizing strategies and demands of the current movement around police brutality and accountability need to be both gender inclusive and specific. Women & trans people of color can no longer be expected to show up but be silent about our experiences, or be boxed into a frame that only allows us to be grieving mothers, sisters, partners of men of color or collateral damage in attacks on them. We are, and forever have been, targets of state violence in our own right, and our experiences must inform the demands of the marches we organize and the movements we lead.

As INCITE! has been saying for the past 15 years, this means we must engage in a critical re-examination of our responses to gender based violence and our conceptions of safety.

The broken windows policing practices that led NYPD officers to choke a 5 month pregnant Rosann Miller for grilling on a sidewalk just weeks after Eric Garner was choked to death on camera, to throw Stefanie Maldonado to the ground for the crime of jaywalking, to target homeless people, and to confiscate condoms from youth of color, women and trans people of color as evidence of intent that they are engaged in prostitution-related offenses is not safety.

“Quality of life” ordinances which give officers the power and discretion to draw and enforce the lines of the gender binary, police the presence of racially gendered bodies in public spaces by reading sexual and gender nonconformity through racialized lenses as signs of disorder, deceit, deviance, violence, madness, and promiscuity, and to extort sex in exchange for tearing up another baseless ticket that will keep you from your job or education, your kids, your appointment are not safety.

The war on terror that leads police to profile, harass, demean and degrade Arab, Muslim, Middle Eastern and South Asian women and women in hijab is not safety.

The continued theft of this land and violations of its Indigenous peoples is not safety.

The enforcement of the borders of this country on the bodies of immigrant women and queer people of color is not safety.

The experiences and patterns I have shared today are exhibit A in the case against carceral feminism’s response to gender based violence. This is what it means to entrust our safety to systems of policing and punishment. This is what demands that we challenge ourselves to think beyond the state to envision what will actually produce safety, what is needed to challenge state violence against all members of our communities, and what will actually ultimately produce liberation for all of us. I treasure and look forward to the space we will all create over the next three days to imagine and enact a world beyond the state, and beyond police.

Andrea Ritchie is a Black police misconduct organizer in New York City whose research, writing, organizing and advocacy work focuses on the profiling and policing of women, girls, and LGBT people of color. She coordinated and coauthored the INCITE! Organizers’ Toolkit on Law Enforcement Violence Against Women and Transgender People of Color, and served on the INCITE! national collective from 2003-2008. Andrea is a Soros Justice Fellow and until recently, she was the Coordinator of Streetwise and Safe (SAS), an organization focused on profiling and policing of LGBTQ youth of color in New York City. She currently serves as the Senior Policy Advisor of SAS and is co-author of Queer (In)Justice: The Criminalization of LGBT People in the United States. She is of Afro Caribbean descent, identifies as a woman/lesbian, and goes by she and her (but is fine with any pronoun). 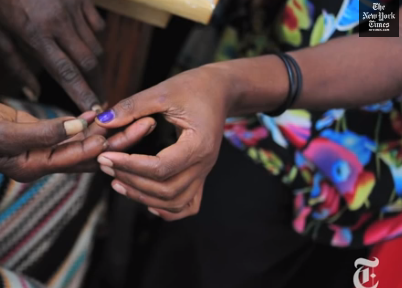 A Culture of Violence
Digna and Me: Cuba, Race, and Transnational Solidarity