Zulfikar Ali Bhutto//Faluda Islam\\ is an artist, performer, zombie drag queen and curator of mixed Pakistani and Lebanese descent. His work explores complex identity politics formed by centuries of colonialism and exacerbated by contemporary international politics. Bhutto explores the politics of queerness, its intersections with Islam and how it exists in a constant liminal and non-aligned space.  Bhutto is currently an artist in residence at SAFEHouse for the Arts, curatorial resident at SOMArts Cultural Center and is a fall artist in residence at the Headlands Center for the Arts. Bhutto is currently based in the Bay Area from where he received his MFA at the San Francisco Art Institute in the summer of 2016. Today he works as a teaching artist, community arts facilitator and part time unicorn in San Francisco.

Tomorrow We Inherit the Earth:

This multimedia series comprised of textile work, performance and video attempts to use the feminine craft of fiber and textile based art to create a future landscape of a fictitious queer rebellion. Set in the future, this revolution is seen through the eyes of a queer Muslim world intent on overthrowing the shackles of Western Imperialism. The aspiration behind this series is to subvert the Western gaze of the Muslim and by extension brown and black body by creating glamorous queered future guerrilla fighters who do not fit neatly into categories of gender, race, faith, threat or desirable subject. It seeks to challenge the shifting borders between terrorist and freedom fighter as seen and named by the Anglo-Saxon world.

The series takes from multiple archives including – but not limited to – photos I took of wrestling cultures in my home, Pakistan and writing sourced from an Urdu children’s book, Stories of Rambo, an account of Hollywood hero Rambo and his brave fight against the Soviet Union alongside the Mujahideen. Through writing an image a narrative is literally written and illustrated over a prolonged period of time.

Historical archive becomes a lens into an unknown world, most likely in the future but also into a planet that defeats notions of time and place. The series is largely inspired by my own personal history as witness to a politically violent world, the song Tayf by Mashrou Leila and the writings of Jasbir K. Puar and Amit Rai in Monster Terrorist Fag and the limitless possibilities presented to us Ursula Le Guin and Octavia Butler. 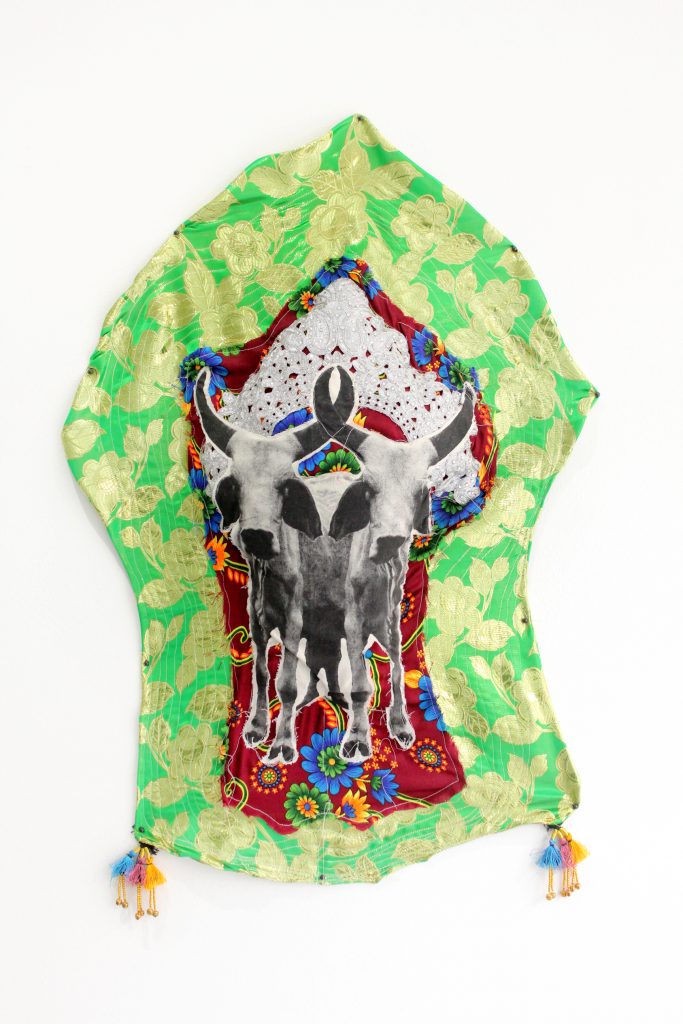 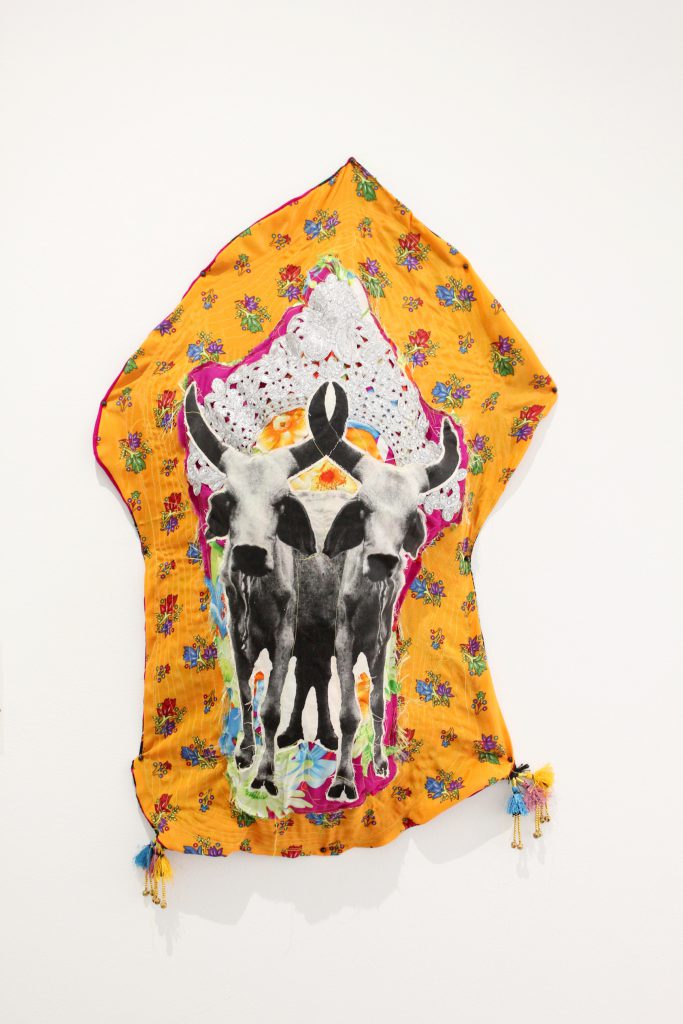 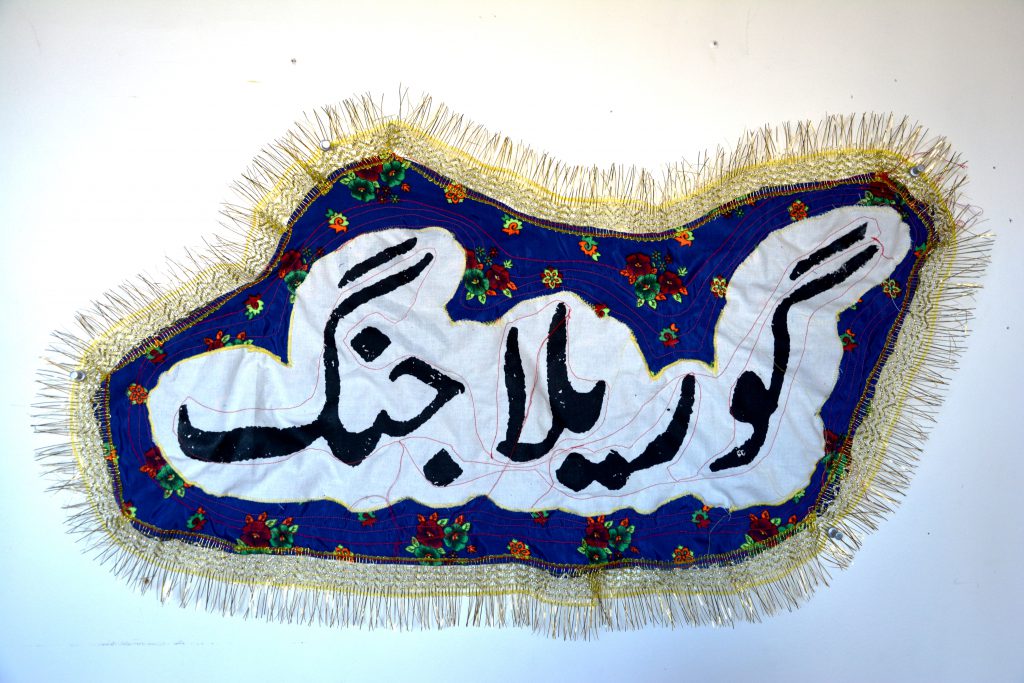 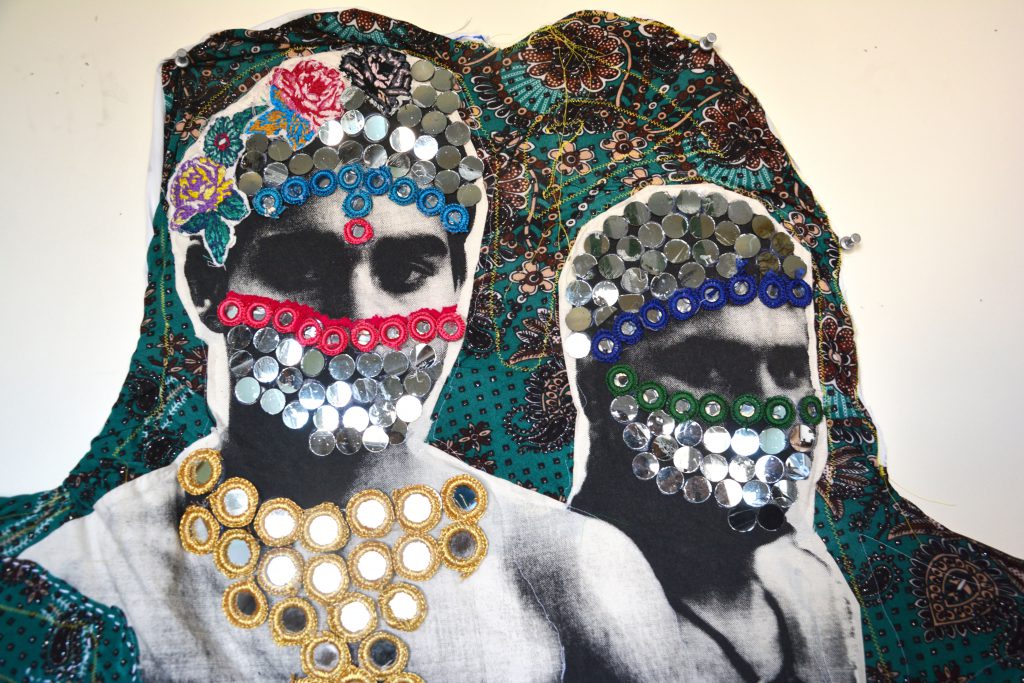 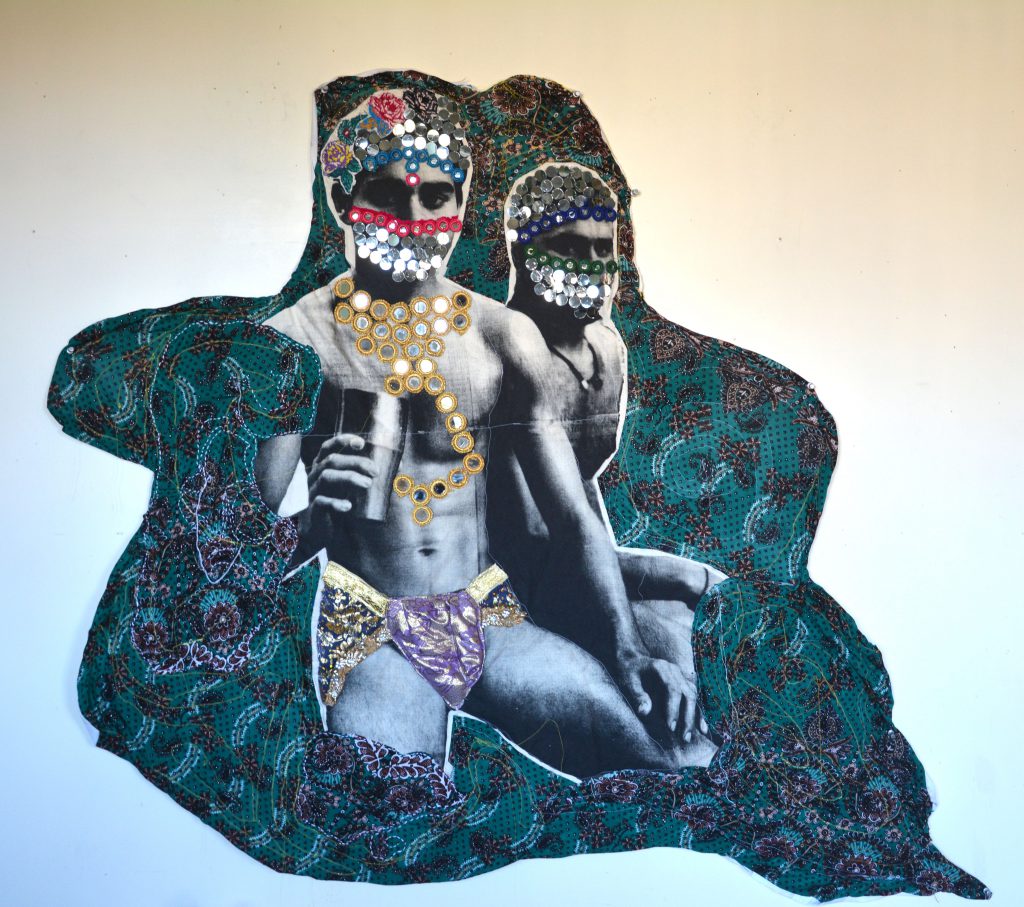 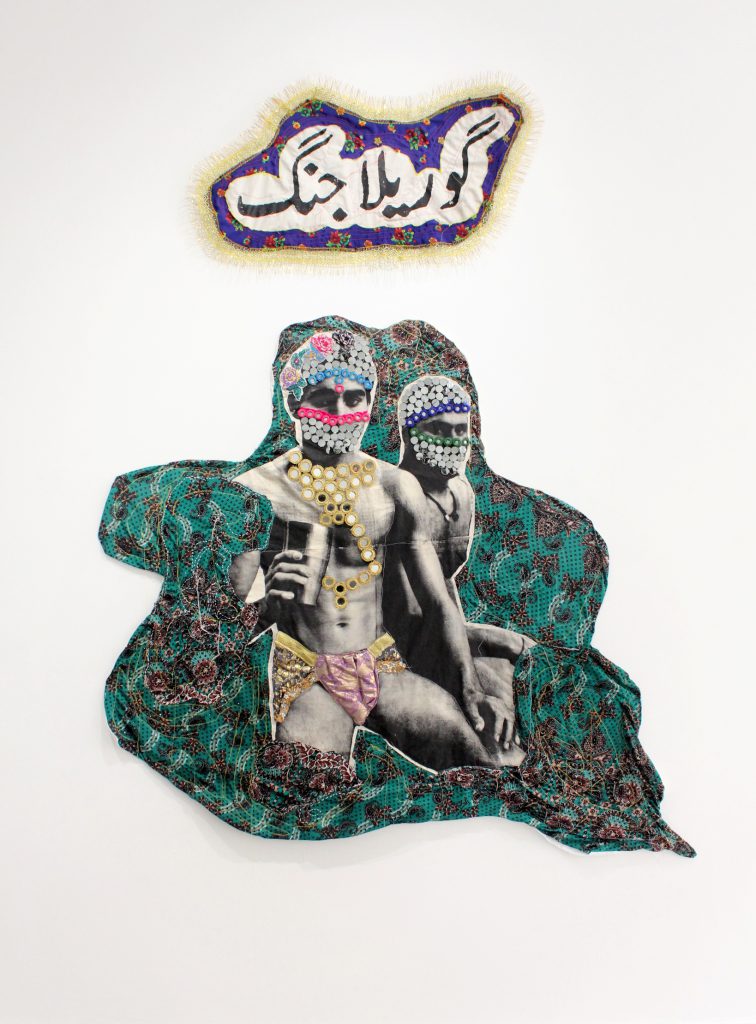 Mussalmaan Musclemen that retrieve images from an exercise manual written by Arnold Shwarzzanegger and translated into Urdu in the early 1980s. Pages from the book are printed several times the size of the original onto fabric; muscle is replaced with flowery fabric and embroidery thread, utilizing feminine practice to reveal a softer masculinity. Moving on from this series, I intend to combine American physique magazines from the 1950s and 60s with archives of wrestlers and musclemen from Pakistan. In my multimedia performances I work as both myself and my drag alter-ego, Faluda Islam. Many of performance projects have several iterations and continue to evolve. I have recently begun working on a performance that attempts to re-imagine a new world order where Muslim drag queens leed a queer revolution and hybridized identities destroy borders. 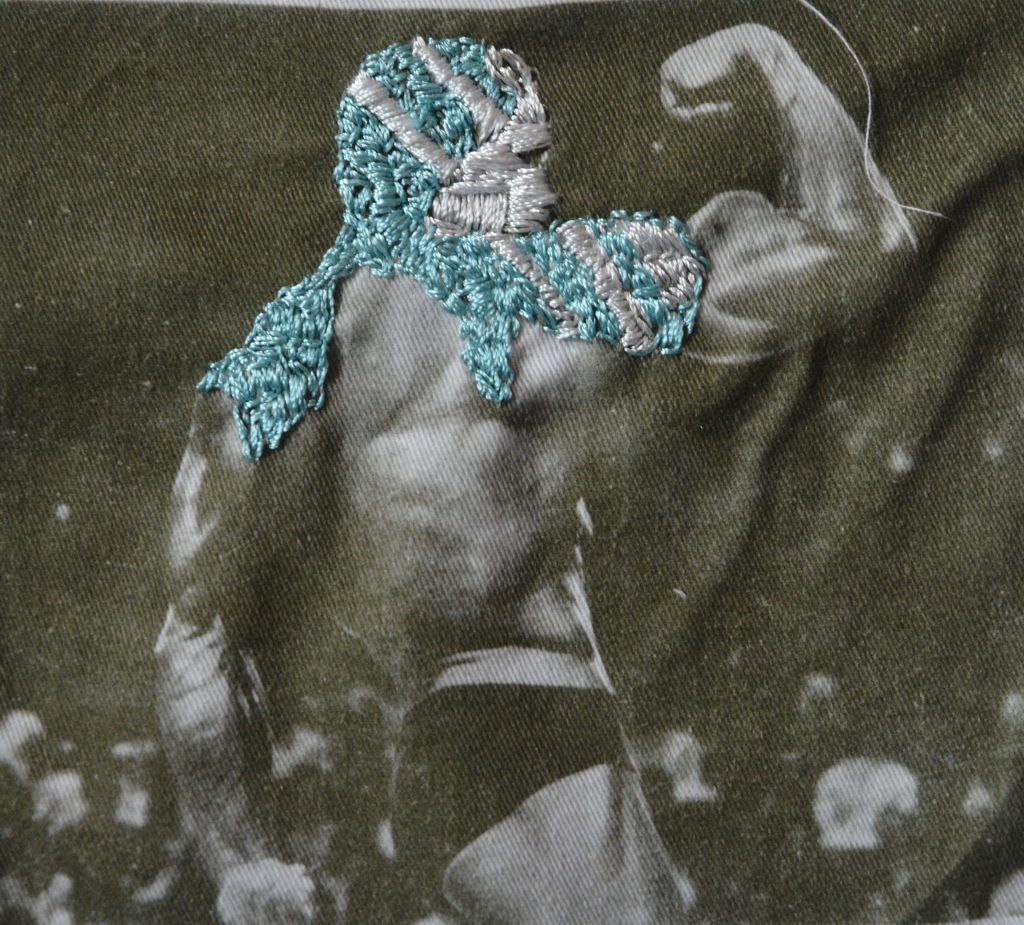 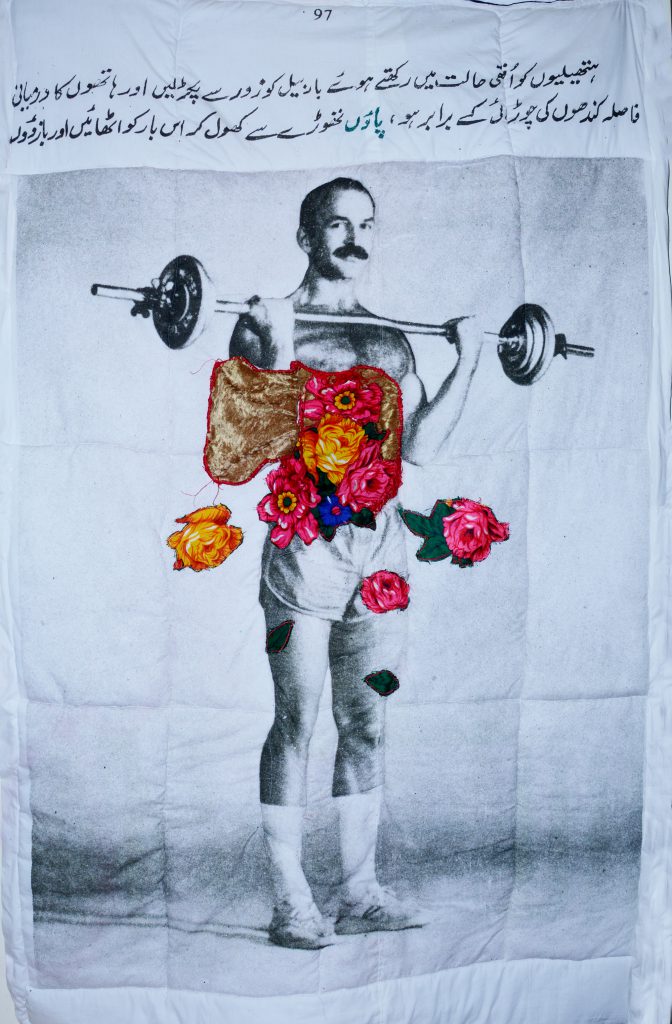 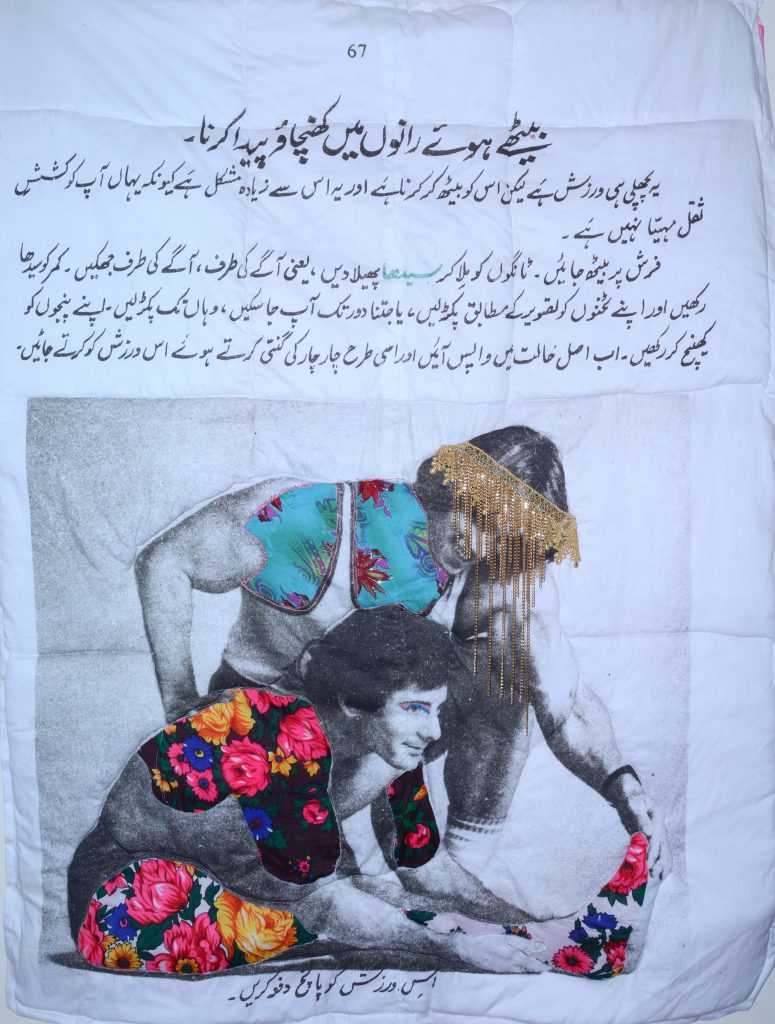