Hushidar Mortezaie was born in Tehran and immigrated to the Bay Area in 1975. He moved to NYC in 1994 for 10 years and now resides in California, living between Los Angeles and the Bay Area. Mortezaie’s work spans the mediums of textile, packaging, graphic design, painting, and radical fashion. Conceptually his work dives into the junctions of gender, politics, queerness, revolution, archive, and mass consumption through branding, propaganda, and the cult of celebrity. Mortezaie is a fashion designer, visual artist, and activist who combines these varied mediums into installation like tableaus that create a singular political pop art world of satire and artifice, reflecting the dystopia and information overload of the 21st century through elaborate detail and layering of concepts, ages, and artistic mediums. Mortezaie’s work prompted the rise of Middle Eastern style and Islamic motifs in fashion and conceptual art through his pioneer celebration of his Iranian heritage. His work has been featured in publications including Italian Vogue, Huffington Post, W magazine, on Brad Pitt in the motion picture Fight Club as well as on Sarah Jessica Parker in the TV Show Sex and the City. Singers such as Madonna, Britney Spears, and Beyonce transferred his visual messages to the masses. He created a new visual language through graphic design, fashion, and fine art to inspire a new generation of Iranian American immigrants to take pride in their culture with the hopes for the children of the new Iranian Renaissance to flourish. Mortezaie travels between Tehrangeles in West LA and his studio in Oakland, the home base for his online bazaar, Silk Road Super. He is currently working with the I.A.A.B on building a visual campaign of positivity in their court case against Trump to appeal the Muslim Ban.

Artist Statement:
As a Gay Muslim Iranian immigrant, I use my work to stand against hate and reside in peace, sharing the complex beauty of my queer muslim and Iranian heritage to defy a media landscape plagued with loud and ill-informed, if not outright xenophobic personalities who live to condemn what they don’t understand and spawn endless tropes and stereotypes. I use those stereotypes and reflect them back in pride as armor to challenge the western lens. Growing up, my father introduced activism as a basic tenet of life, social justice has been a part of my upbringing and daily living…not just my creative practice. My work resides in hope. A shared hope with the goal to share a better understanding of historical and contemporary cultural collisions like imbalances of power between developed and developing nations, the consequences of colonialism, and the negative effect of mainstream media portrayals on immigrant communities.

Oil Painting, Pahlavans. Champions in a clandestine embrace, hand in hand,
Love blooming in Spring hues
Mixed Media Poster Collage
Atomic Bombs, Wars waged against the Middle East and the entire Weapons of Mass Destruction arguments are forever creating toxicity and poison in the lives of Middle Eastern people yet they remain, transform and radiate.

Love is Love across all genders just as beauty comes in all shades of the rainbow…Makeup not War. 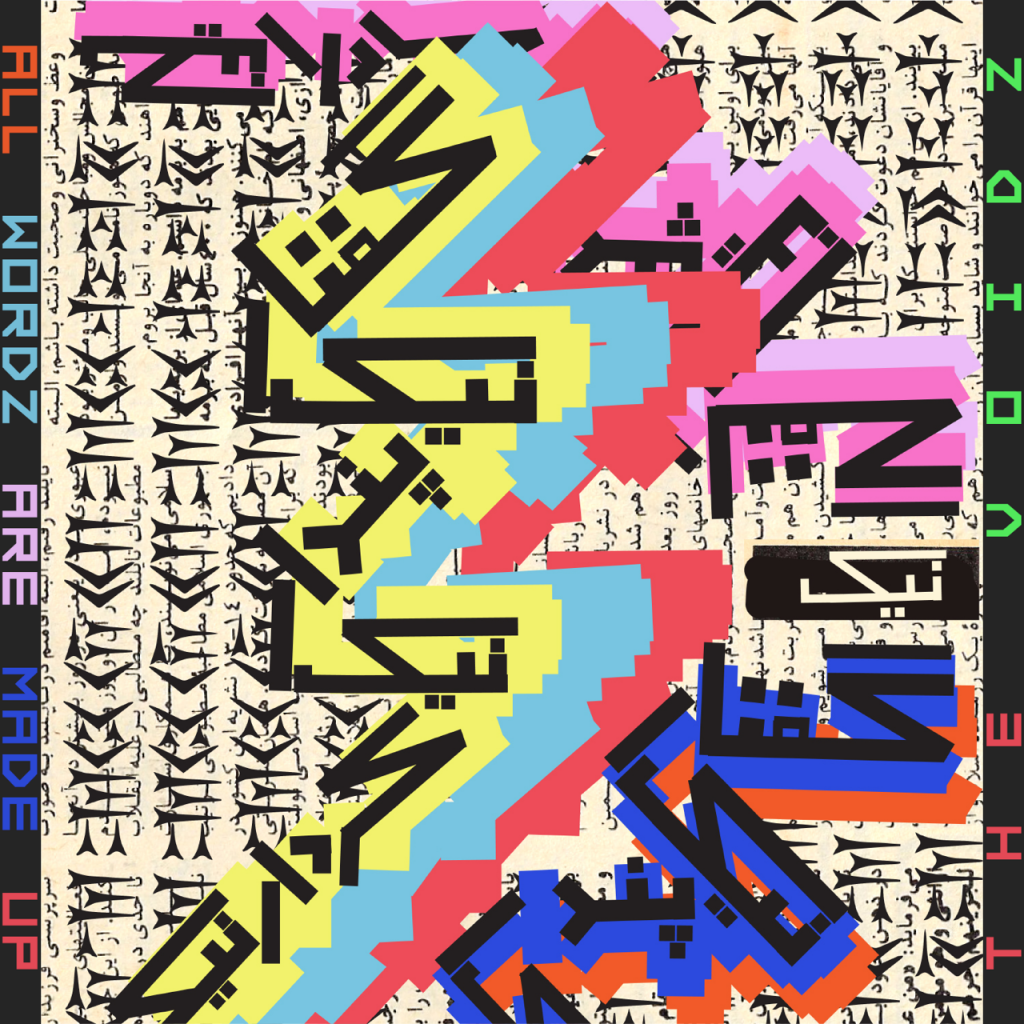 A Layering of words from the past to the future come together in the digital collage “Good Words.”
Licensed for the single cover for the rock band the Voidz latest single release titled “All Words Are Made Up”. 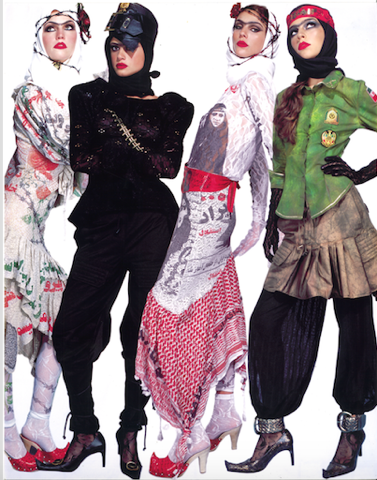 Reads the Farsi surrounding the hijabi who trends as the latest fashion fad to enter the market with modest wear collections and Muslim SuperModels gracing magazine covers, once seen only as the Oppressed by both the media and many luxury designers. Muslim women have long lead the way against patriarchy and extremism from all sides and regions, the fashion world, late to the game, is just now beginning to take notice. Regardless of market modes, the hijab clad woman resides. 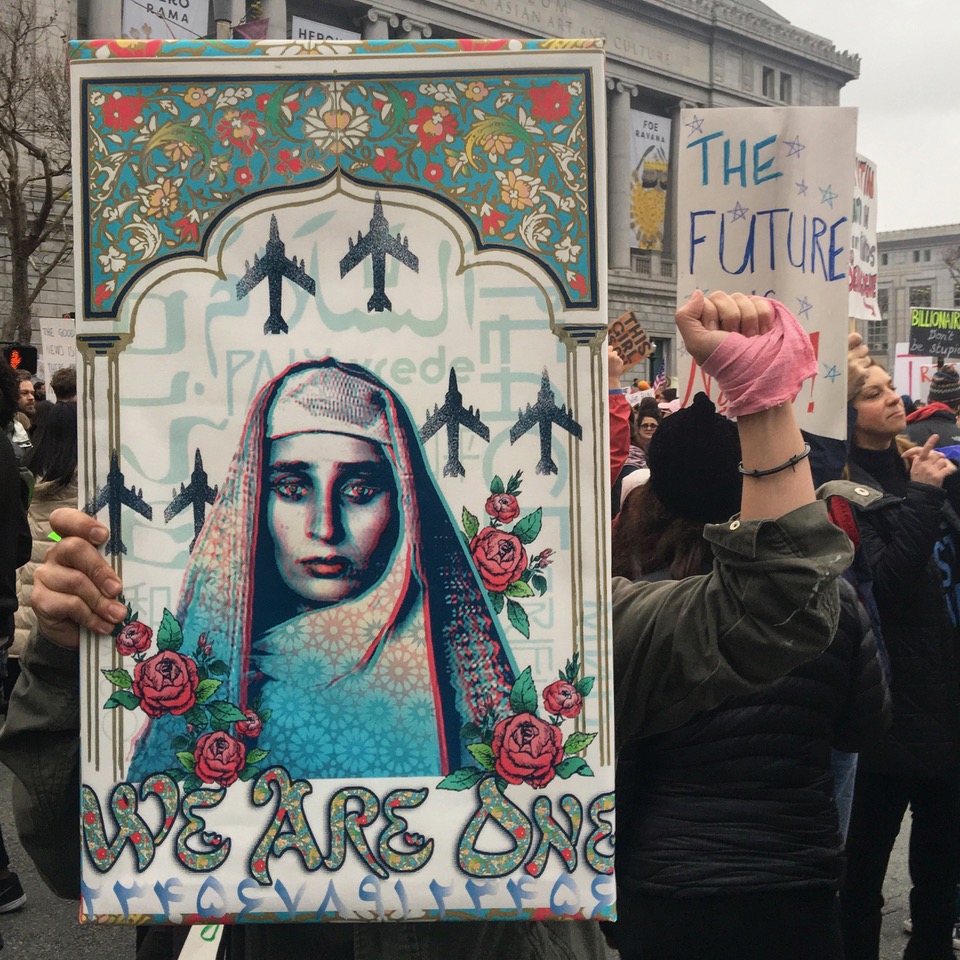