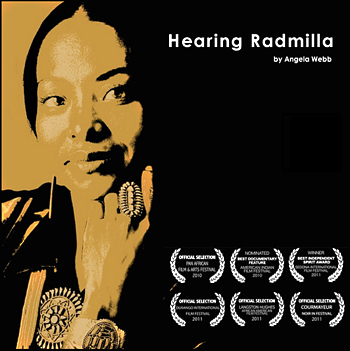 Kalamazoo College’s Ethnic Studies program is collaborating with the student organization, Sexual Safety and Support Alliance, and the Arcus Center for Social Justice Leadership (ACSJL) to present “Working Together to End Violence.” The event will occur on Friday, September 26, at 2:35 p.m. in the ACSJL building on K’s campus, and it will feature a viewing and discussion of the film Hearing Radmilla. The film was produced and edited by Angela Webb and documents the turbulent reign of Radmilla Cody, Miss Navajo Nation 1997-98, and the first biracial person to hold that title. The film chronicles her development as the goodwill and cultural ambassador of the Navajo Nation and her success as an award-winning vocal artist. Later Cody was sentenced to 21 months in a federal corrections facility for misprision of a felony, essentially concealing knowledge of a crime. The extenuating circumstances included an abusive boyfriend involved in marijuana trafficking. When Cody was released in 2004 she became a passionate activist against domestic violence. Both Webb and Cody will attend and participate in the discussion, which is part of the social justice leadership center’s With/Out ¿Borders? Conference.

The film offers an unparalleled treatment of race and gender in the U.S., according to Reid Gomez, who directs the College’s Ethnic Studies program and will serve as the moderator of the event. “No other film crosses the firm racial boundaries that police the categories of Black and Indian. Significantly, the film also addresses the epidemic of domestic violence and the singular position of women in prison.”

The issue of domestic violence has been prominent recently as a result of developments in the case of former Baltimore Raven Ray Rice and his wife Janay Palmer Rice. But the issue is longstanding and particularly acute for indigenous women. “According to a U.N. report, indigenous women are eight times more likely to be murdered that non-indigenous women,” said Gomez. “The violence against Black and Indian/indigenous women has largely been ignored, disavowed, and rendered invisible.”

Gomez has high praise for the film. “Webb was able to tell Cody’s complex story (of colonialism, racism, and domestic violence) without resorting to any grotesque display or to the erotics of terror.”