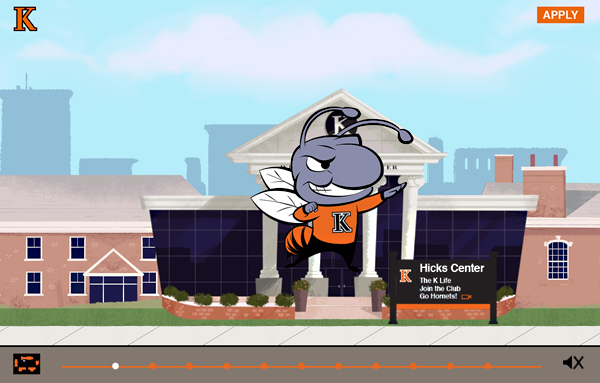 One of Kalamazoo College’s most important tools for attracting prospective students and applications just got a lot more effective, according to Director of Admission David Anderson.

It takes a lot of courage to walk away from that adjective “award-winning.” Why the change? “As excellent as it was, prospects weren’t reading our viewbook,” said Anderson. (It’s a brave new world out there.) “We wanted to share the ethos and the value of a K education where our prospects ’live,’ so to speak. And that place is the digital universe, where they engage with colleges and universities and with each other.”

Of course, K is one of countless denizens of the digital realm. So “we need to be at the forefront, at the cutting edge of this work,” added Anderson. K’s digital viewbook delivers edginess, in five ways: paralax animation; gamification; extensive use of Go-Pro video; Prezi-like mosaic technology; and responsive design.

K’s digital viewbook visitor’s perspective opens on outer space, zooms across the country, and alights at Kalamazoo College. “That staggered, three-dimensional movement is paralax animation,” explained Anderson. And it works. 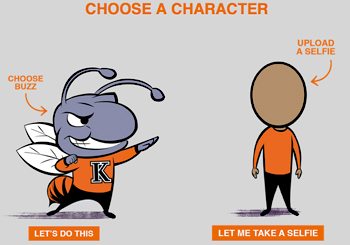 K’s digital viewbook reader/explorers can take the journey as Buzz or as themselves—-an animated figure with a pasted “selfie.”

Once “landed” at K, the viewbook visitor experiences gamification, “a visual digital tool that makes progression through the viewbook (and its introduction to the K experience) active,” said Anderson.

That “physical” activity well aligns with the predominance of Go-Pro video sequences. ’Go-Pro is a fish-eye (wide angle), high definition approach to videography originally used by surfers and race car drivers,” said Anderson. “It captures active life as it happens,” a reality very fitting for a place like K, which is far less an adjective and far more a verb, a muscular one at that.

Not only muscular, but also wide-ranging. “We sent out Go-Pro cameras with students all over the place,” said Anderson. In K’s case, that means across the globe to capture study abroad experiences. One campus Go-Pro was even mounted on a Quadra-copter.

The visit to the digital viewbook ends with the “Prezi-like mosaic,” a collage of images that open to still photos and more videos that convey the life of a K education. Work continues on raising the mosaic’s ratio of videos to stills and to complete photo labeling where needed. But even now, all images are animate with K living. Action is paramount—throughout the viewbook visitors are called on to apply, and at the end of the journey, they can to that as well as ask for information and schedule a visit.

The department of admission launches the tool to prospective students this week, but it’s already done some testing with admitted students.

“During spring’s VISIT THE ZOO days we shared the viewbook with the visitors,” said Anderson. He admits the comparison isn’t exactly apples-to-apples; admitted students by virtue of that status likely have more interest in K than a “cold” prospect. Nevertheless, the 56 percent open rate was excellent, even with such a predisposed group.

“If we get a rate close to that with new (prospective students), we will be ecstatic,” said Anderson.

What about that walking away from an award-winning print publication? Well, it’s a lot less intimidating now that the digital viewbook can boast its own honors. In fact, the digital viewbook has won two gold-level awards sponsored by the Higher Education Marketing Report. Before it was launched, even. Before its technical de-bugging was complete! The awards are called the Educational Digital Marketing Awards, and we think a good nickname would be THE EDGIES. K has two (for best online publication, and for interactivity)!