Lisa Ludwinski ’06 and her Sister Pie bakery has won this year’s Comerica Hatch Detroit contest aimed at boosting start-up businesses. Lisa was awarded $50,000, defeating three other semifinalists, and will get legal, accounting, and information technology services from Hatch Detroit sponsors.

Read all about it in this Detroit Free Press article. Congrats, Lisa and Sister Pie!

THIS JUST IN: Sister Pie is a semifinalist in the Hatch Detroit 2014 contest to win $50,000 to put toward its bricks and mortar bakery. Visit the Hatch Detroit website or Facebook page for details and to cast you votes (by AUGUST 14) for Lisa Ludwinski and Sister Pie . 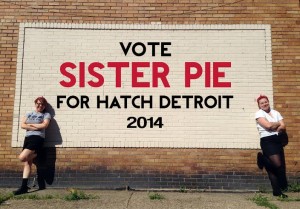 Vote early and vote often, but vote by August 14: http://sisterpie.com/hatch-detroit-2014

When Lisa Ludwinski ’06 opened a pie baking business in Detroit in 2012, she started in her mother’s kitchen. Within a year, the level of business demanded that she move into a commercial kitchen in Hannan House on Woodward Ave. in Midtown. Now, with a production that includes selling pies and more at Parker Street Market, Germack, and Eastern Market, along with taking orders and making deliveries far and wide (seven days a week), she’s begun to build out her own bakery in a West Village space.

Read about Lisa’s new entrepreneurial venture — and why she knew it had to be called “Sister Pie” — in the August 6 issue of Metro Times, Detroit’s free weekly alternative newspaper. (Thank you Tim Krause ’07 for sending the link to us. Hope there’s a slice of pie in it for you — and us!)