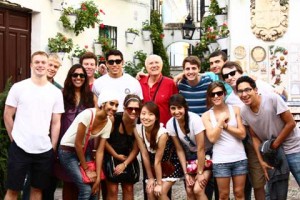 2013 Graduates on study abroad in Spain.

Graduating seniors of the Class of 2013 completed an anonymous survey titled “First Destination.” As the name implies most of the questions look forward. But at least one looked back: “What was your most meaningful or transformative experience at K?”

The majority of the 2013 graduating students reported that study abroad was the most meaningful experience at K. One student responded, “My time abroad was transformative. It opened my eyes to the wider world around me and taught me that apart from our cultural differences, all people have the same general needs and wants. All people want to be respected, and all need health care, shelter, and food.”

That study aboard was valued so highly by seniors is no surprise. The College offers 41 programs in 21 countries on six continents, differing in length and academic emphasis. In the past four years K has had a student participation rate between 80 and 85. The Institute of International Education has ranked Kalamazoo College 10th among colleges and universities for study abroad participation.

Many students cited professors and classes as the most meaningful experience. Again, not surprising given that K has a 12-to-1 student-to-faculty ratio. In addition, academics is integrated with service-learning and social justice, and students mention the importance of both. One students response: “The personalized, experiential education I was able to pursue at K made my learning not some stilted academic experience, but rather four years of intense personal growth and developing relationships with others that helped me both better understand my future path and inspired me to continue on it.”

Students also lauded the importance of co-curricular activities, including sports teams and campus student organizations. K has more than 60 active student organizations that focus on various areas, such as culture, athletics, music, politics, publishing, and spirituality.

A few students said working on campus was meaningful to them. Their jobs here opened up new opportunities and allowed them to give back to the K community.

A small amount of students cited their Senior Individualized Project as the most transformative part of their time at K. “My SIP year gave me the tools and confidence that will carry on into my life after K,” said one student.