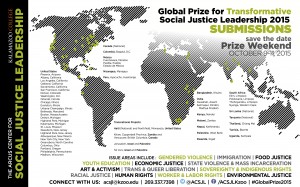 Kalamazoo College has received 87 entries from 22 countries to its 2015 Global Prize for Transformative Social Justice Leadership. Entry deadline for the juried competition was April 17. Ten finalists will be announced in early July and vie for a $25,000 prize during a Global Social Justice Leadership Exchange, Oct. 9-11, on the K campus in Kalamazoo, Michigan.

“We are thrilled by the number and geographic scope of the entries we received,” said Mia Henry, executive director of K’s Arcus Center for Social Justice Leadership (ACSJL), which is hosting the competition. “We are impressed and inspired by the breadth and depth of the issues the applicants are addressing,” she added.

Jurors, consisting of Kalamazoo College faculty, students, administrators, and community members have been hard at work to determine the ten finalists. Each entry—in the form of an eight- to 10-minute video—has been reviewed by three jurors.

Each finalist will be awarded $1,000 and brought to the K campus Oct. 9-11 where they will present their video and make a case for their projects to an audience consisting of a second jury, other finalists, Kalamazoo College campus members, invited guests, and the general public.
Jurors will select one project to receive the $25,000 Global Prize at the end of the weekend gathering.

“The competition was open to anyone in the world doing grassroots, transformative social justice work that challenges structural inequality and that centers the voices of those most impacted,” said ACSJL academic director Lisa Brock, Ph.D.

“The prize weekend will feature a leadership exchange that includes workshops and think-tank discussions among the finalists, an online publication, and video documentation that finalists can share long after prize weekend is over,” Brock said.

Kalamazoo College held its inaugural Global Prize in Social Justice Leadership in May 2013.
Instead of awarding a single $25,000 prize, as had been planned, the jurors were split and ultimately decided to award three Global Prizes for $10,000 each.

The Arcus Center for Social Justice Leadership (www.kzoo.edu/socialjustice) was launched in 2009 with support from the Arcus Foundation (www.arcusfoundation.org), including a $23 million endowment grant in January 2012. Supporting Kalamazoo College’s mission to prepare its graduates to better understand, live successfully within, and provide enlightened leadership to a richly diverse and increasingly complex world, the ACSJL will develop new leaders and sustain existing leaders in the field of human rights and social justice.

Kalamazoo College (www.kzoo.edu), founded in Kalamazoo, Mich., in 1833, is a nationally recognized liberal arts college and the creator of the K-Plan that emphasizes rigorous scholarship, experiential learning, leadership development, and international and intercultural engagement. Kalamazoo College does more in four years, so students can do more in a lifetime.