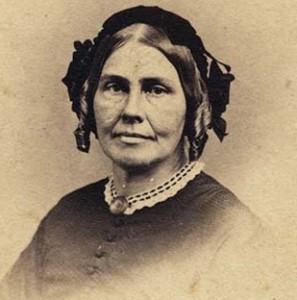 Kalamazoo College has long honored Lucinda Hinsdale Stone for her leadership at the College during its formative years in the mid-1800s. Now she has been honored by the United States Congress.

Congressman Fred Upton, who represents Southwest Michigan, read a tribute to Stone into the Congressional record recently on the occasion of Women’s History Month and Stone’s bicentennial year of birth.

“Mr. Speaker, Women’s History Month is a time for all Americans to pay tribute to the generations of women who have made our world a better place in which to live,” said Upton on the floor of the U.S. House of Representatives on March 27, 2014. “Today, it is my great honor to recognize Kalamazoo, Michigan’s Lucinda Hinsdale Stone for her efforts to advance education reform and women’s rights.”

“Upon moving to Michigan in 1843 with her husband, Dr. James Stone, Lucinda became the first principal of the Ladies Department at the Kalamazoo Branch of the University of Michigan, which would soon become Kalamazoo College. Together, Lucinda and James Stone helped shape the school’s direction, in part by introducing coeducation and promoting abolitionism and women’s rights.”

Lucinda Hinsdale Stone invited noted abolitionists and educators Frederick Douglass and Henry James Thoreau into her home and classroom. She also was a charter member of the Ladies Library Association in Kalamazoo (the third-oldest such club in the U.S.), and she organized the People’s Church of Kalamazoo, the Michigan Federation of Women’s Clubs, and the Women’s Press Association. Susan B. Anthony dubbed her the “Mother of Women’s Clubs in Michigan.”