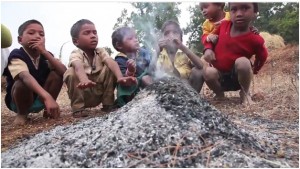 At a Crossroads: Forest Dwellers of India — one of ten finalists in the 2015 Kalamazoo College Global Prize for Transformative Social Justice Leadership.

At a Crossroads: Forest Dwellers of India

Western culture – obsessed with perpetual development, ever-increasing profits and uninterrupted growth – could learn a lot from the forest-dwelling native tribes on the Indian subcontinent, many of whom are unknown even in their own country.

Steeped in this economic paradigm, many tribes have become disconnected from the earth they consider their mother, losing the sensation of soil on their hands, the taste of fresh water, the ability to sense the wind, and what weather it might bring.

“These (indigenous) people wouldn’t even use a hoe on the earth, because they thought they were hurting their mother. They would simply mix their seeds, spread them and see what grew,” said Arunima Sharma, an organizer affiliated with Ekta Parishad, a nonviolent people’s movement that works to build community, self-reliance and power to India’s poorest people.

These indigenous peoples’ way of life is being seriously threatened, with government agencies in India seeking to remove them from the land they’ve taken care of for countless generations. The push to ‘Westernize’ these people – bringing them into the modern economic fold, teaching them different languages, exposing them to the educational system – has meant their way of life is slipping away.

Case in point, Sharma says, is the loss of the knowledge of several plant medicines, because the tribes are losing their languages and becoming smaller. The “At a Crossroads: Forest Dwellers of India” project empowers the dream of tribal communities to grow back forests, converting wastelands into healthy ecosystems, thus returning sustenance, agroforestry-based livelihood, and rootedness to community.

Some tribes, who have taken to living in forests redefined as ‘protected’ by the Indian government, have had their crops destroyed by government officials, Sharma says.

“These people have been called ‘backward’ by the government,” she says. “But in our view, it’s the modern society and its economic models that are unsustainable. Perhaps it’s ironic, but in order to go forward, we must go backward, to sustainable models of development.

In advocating for the autonomy native peoples, Ekta Parishad is revitalizing the relationship of cultural indigeneity and biodiversity by celebrating tribal traditions, supports indigenous education provided by elders to youth, retaining memory, history and culture and deconstructing hierarchy and re-defining progress.

There is a deep, respectful, symbiotic relationship between the native, forest-dwelling people of India and the land they call home. They use all their senses when interacting with their natural world, Sharma says.

“We are creating an opportunity for tribal communities to share their stories with the world, giving visibility to those lost and forgotten,” she says. “We need to question what out notion of progress is, and these native people can teach us a lot. We have a collective case of environmental amnesia, and are in such denial we forgot where we came from. These people may have no idea what life in the modern world is like, and are considered the poorest of the poor, but in many ways they are the ones who show us how to move forward, with love, respect and honor for the home we all share – the Earth.”