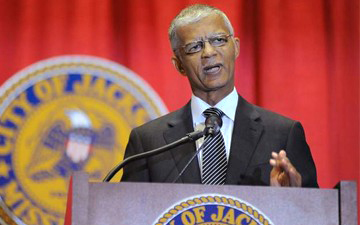 Chokwe Lumumba ’69, mayor of Jackson, Mississippi, died on February 25, 2014. He was 66. He came to K from Detroit, Michigan, as Edwin Taliaferro. He majored in political science, played football and basketball, and was instrumental in the creation and growth of the College’s Black Student Organization. He was profoundly affected by the assassination of Dr. Martin Luther King, Jr., which partly inspired his lifelong dedication to human rights and social justice.

Lumumba changed his name in 1969. He took his new first name from an African tribe that resisted slavery centuries ago and his last name from the African independence leader Patrice Lumumba. His loss is widely mourned, and a news obituary appeared in the February 26 New York Times.

Lumumba moved to Jackson, Mississippi, in 1971 to work in the civil rights movement there, then returned to Michigan where he earned his law degree (Wayne State University) and continue the fight for political and economic liberation of all people. He returned to Jackson in 1988 and spent the next two decades as a tireless defense attorney and human rights advocate, representing mostly African-American defendants.

A dedicated socialist, Lumumba was also a leader and organizer of the “Republic of New Afrika Movement,” a group that welcomes both blacks and whites in the struggle “for human rights for black people in this country and human rights around the globe,” said Lumumba.

Lumumba served one term on the Jackson City Council before he was elected Mayor of the capital in 2013. Among his achievements he persuaded voters to add a local sales tax to improve the city’s aging infrastructure. He is fondly remembered by many family and friends, among them Kalamazoo College classmate and fellow Mississippian Max Garriott ’69, who wrote: “I was privileged to witness his early development as a leader in the turbulent 1960’s at Kalamazoo College, and fate had it that as two Northerners from widely varying backgrounds we found ourselves shortly after graduation in service to the African-American community of the Jackson area, he as a lawyer and I as an educator. Jackson shall be forever rightfully proud of this giant of a man who, in the short span of seven months, managed to rally even the most skeptical citizens to his side. His firm commitment and gentle demeanor, coupled with courage and determination in the face of adversity, are exactly what this wonderful city needs to emulate as it now faces a future deprived of his guidance as its mayor. My prayers go out to his beautiful family and friends.”

LuxEsto did a feature story (Fall 2010) on Lumumba, and that article closed with his own words: “The struggle for human rights–black rights and white rights–is far from over. Everywhere you look in the world today, you see economic oppression, class oppression being visited on suffering human beings.

“That oppression is simply not acceptable. It must be fought. And you can be sure we will go right on fighting against economic and social injustice of every kind for as long as it takes!”

Sing me a song of the Revolution
Marching like fire over the world,
Weaving from the earth its brightest red banner
For the hands of the masses to unfurl.

Sing me a song of the Revolution
Drowning the past with a thunderous shout:
Filled with the strength of youth and laughter,
And never the echo of a doubt.

O mighty roll of the Revolution,
Ending the centuries of bloody strife,
Ending the tricks of kings and liars,
Big with the laughter of a new life.

Cutting, O flame of the Revolution,
Fear from the world like a surgeon’s knife,
So that the children of all creation
Waken, at last, to the joy of life.

(Langston Hughes, “Song of the Revolution”)