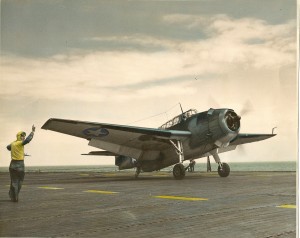 The film is free and open to the public through a partnership between Kalamazoo College, the Kalamazoo Film Society (www.kalfilmsociety.net), and the Air Zoo (www.airzoo.org) in Kalamazoo.

Heroes on Deck tells the story of a little known chapter of United States involvement in World War II that took place on Lake Michigan, not far from Kalamazoo. Following the Japanese attack on Pearl Harbor, the United States Navy was desperate for pilots who could take off from aircraft carriers, strike the enemy, navigate their way back to the ship, and land safely – no easy task in the vast Pacific. With only seven carriers left in the entire U.S. fleet, none could be spared for training. In order to train thousands of young aviators, two old passenger ships were stripped of their upper decks and converted to “flattops,” Navy slang for aircraft carriers. 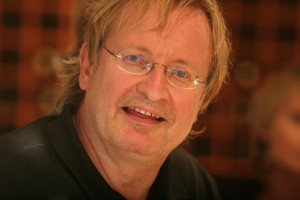 Filmmaker John Davies ’75 will meet with K students and show his new film, Heroes on Deck, before taking the film to premieres in London, Washington, New York and other cities.

Between 1942 and the end of the war more than 15,000 pilots, including 41st President of the United States George H.W. Bush, practiced landings and takeoffs on the pitching decks of these “freshwater carriers” as they steamed up and down Lake Michigan. Eight successful takeoffs and landings, usually completed in a single day, were enough to guarantee a young pilot a trip to the Pacific.

Crashes, navigational errors, and “water landings” often led to serious injuries and occasionally death. As a result, more than 100 classic WWII fighters and dive-bombers sank to the bottom of the lake. For more than 30 years, with the U.S. Navy’s blessing, a team of skilled professionals has been identifying and recovering these forgotten warbirds, using deep-water divers, side-scan sonar, and Remote Operating Vehicles. More than 40 aircraft have been brought to the surface and a few have been restored to flying condition. Most are on display in museums and airports under the supervision of the National Naval Aviation Museum in Pensacola, Florida.

One of these airplanes – a Grumman Wildcat – has been fully restored and is on display at the Air Zoo in Kalamazoo, while another is currently undergoing restoration there. Artifacts from these planes will be on display at the February 16 film premiere at K. Filmmaker John Davies and Air Zoo restoration experts will be present to answer questions. 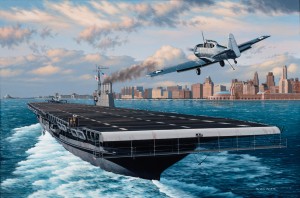 Heroes on Deck tells a little known story of heroism performed on Lake Michigan off the coast of Chicago during World War II.

John Davies is an Emmy Award-winning Producer/Director who spent the first decade of his career at WTTW-PBS Chicago helping to create documentaries and national series (including Sneak Previews with renowned film critics Gene Siskel and Roger Ebert). Moving to Los Angeles in the 1990s, John created series and specials for networks and cable channels including NBC, ABC, FOX, AMC, TRU-TV, VH-1, BRAVO, and Comedy Central. He’s also produced episodes of Biography for A&E, Intimate Portrait for LIFETIME and documentary specials for Showtime, COURT TV, and ESPN. His reality series, Run’s House, was an MTV hit and his feature length documentary, Phunny Business, (about Chicago’s first black owned comedy club) was hailed as “one of the best documentaries of 2012” by film critic Roger Ebert. John’s recent documentary, The 25,000 Mile Love Story, has won film festivals around the world and premiered on Public Television in fall 2015. He is currently developing Carson the Magnificent, a mini-series about the life of Johnny Carson.

This is the third time Davies has returned to campus in recent years to show one of his films and meet with K students and faculty in documentary film, media arts, and theater arts classes.