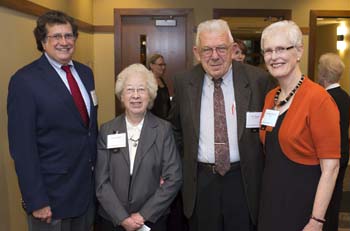 Among the many who gathered for the public launch of the campaign for Kalamazoo College were (l-r): Trustee Emeritus Phil Carra ’69, Louise Fugate, Professor Emeritus of German Studies Joe Fugate, and Chair of the Board of Trustees Charlotte Hall ’66.

Kalamazoo College officials today announced that they have raised more than $84 million in gifts and pledges in The Campaign for Kalamazoo College, a $125 million effort intended to help K “elevate excellence” and “expand its impact” on and off campus.

The College launched the campaign in March 2010. The anticipated end date is June 30, 2015. With today’s announcement, the College moves into a more public phase in which all alumni and other friends of the College will be asked to make a contribution to one of four campaign priorities: student opportunity and access, faculty excellence, K-Plan enrichment, and capital projects.

“The $84 million committed by donors thus far is an amazing statement about how much they value K and the exceptional education we offer students,” said K Board of Trustees Chair Charlotte Hall ’66. “This is a very exciting time at Kalamazoo College,” she added. “This campaign supports a strategic plan that builds on the College’s mission and its historic strengths. It will elevate excellence across campus–excellence among our faculty, excellence within the student body, and excellence across our campus facilities.”

According to Kalamazoo College President Eileen B. Wilson-Oyelaran, the impact of the campaign is already being felt. “More than $7.5 million in new student scholarships enables us to enroll highly talented students regardless of their economic backgrounds,” she said. “Six newly endowed faculty positions help assure that these students are educated by stellar teachers and scholars.

“We have begun to strengthen the experiential programs that power the K-Plan,” she added, “including international engagement, career internships, leadership development, and student research.

“Because of donor generosity, we have also invested in a number of building projects—-such as the Hicks Student Center, K athletics fields and the Arcus Center for Social Justice Leadership—-that enrich the student experience and foster an even closer campus community.”

Nearly half of the estimated $20 million needed to replace the College’s aging natatorium and build a new fitness and wellness center has been pledged by donors.

“These and future gifts will have a profound impact on our students and ultimately the communities in which they will live and work,” said Wilson-Oyelaran. “This campaign will help K expand its impact on and off campus and help our students do more in four years so they can do more in a lifetime.”