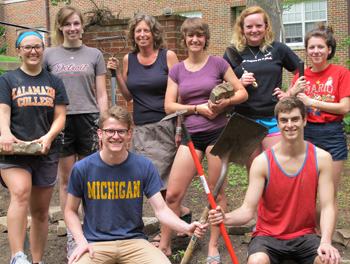 The seniors taking the class, “Engaged Community Membership” (see photo), can build more than a good retaining wall in the College’s Grove area. They also can build a valuable course. And they did–their own capstone course.

In the winter quarter some 50 interested seniors met to begin to plan a “Senior capstone” course, one that would reflect the best thinking of seniors about a course that  structures reflection on their previous three and two-thirds years of academic and experiential rigor. The result of this winter planning was the spring quarter pass-fail class: “Engaged Community Membership.” The notion of community became the theme, according to class member and anthropology-sociology major Nicole Allman ’13.

“We determined the course goals, set projects, and created the syllabus,” said Allman. “We focused on skill-based, concrete ideas surrounding the concept of community,” she added. Two projects in particular became the core of the course–a senior class recipe and cook book, tapping the experience of the Class of 2013 both on- and off-campus, including extending families throughout the world; and a landscaping and retaining wall project in the College’s Grove area.

Allman loved the class for both its hands-on and reflective qualities. “It was a valuable capstone experience that drew out and extended what we’d learned in the classroom and out over the past three years,” she said. “For me it clarified what it means to build a community and provided a blueprint for doing so that I can use to become a part of new communities.” The cookbook, she added, will be published (electronically) and shared with classmates and wider audiences.

More information access the project will be shared in the future.