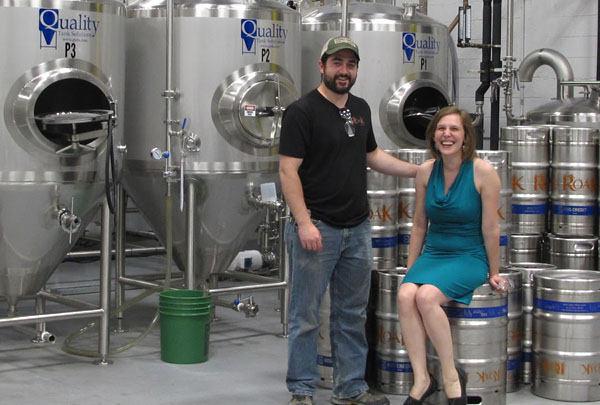 Half a dozen years ago first-year student Eeva Sharp ’13 was baking banana bread in the Trowbridge Hall kitchen when classmate (though, at the time, complete stranger) Trace Redmond ’13 walked in.

“Oh, you’re doing it wrong,” he said. Lucky for him there were beginnings of a chemistry other than that happening in the bread. Eeva and Trace have been together since freshman year, and currently you can find them both working (still “in the kitchen” so to speak) at the recently opened Roak Brewing Company in Royal Oak, Michigan.

The morphing of their love of bread to beer started long before Roak, even before Trowbridge. Eeva did a gap year prior to K during which she lived in Belgium. “Beer is a big part of the Belgian cultural identity. It’s a gastronomic experience that I really came to appreciate.” Trace was already home brewing as a student. Eeva soon joined him in that enterprise. 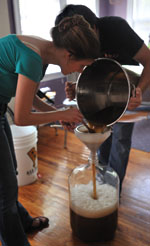 After graduation they moved to Grand Rapids. Trace worked at Founders Brewery; Eeva worked in communications and development for The West Michigan Center for Arts and Technology. This past spring Trace got an offer he couldn’t pass up: director of quality control and partner brewer at Roak. By the way, his new employer queried, did he know anyone who could tackle the new venture’s social media and marketing functions. Eeva interviewed a few weeks later. Her new title: director of marketing at Roak.

Both are excited to be part of a new microbrewery. Eeva enjoys the creativity of the craft beer industry and, the sense of shared community in Royal Oak. Trace, with head brewer Brandon MacClaren, loves making beers that are clean, crisp and fresh with the best ingredients and a custom brewing system that was built around the process that he and Brandon have developed to craft their brews.

Roak makes six core beers (Powerboat, Around the Clock, Means Street, Live Wire, Devil Dog and Kasmir) and just released their first seasonal (Melonfest). You can visit the 30-barrel custom brewhouse and taproom (330 E. Lincoln Street) from 4 p.m. to 10 p.m. (Monday through Wednesday), 11 a.m. to 11 p.m. (Thursday through Saturday), and noon to 10 p.m. on Sunday. But be sure to get there early! Seats fill and lines form quickly in the recently opened taproom. Text by Mallory Zink ’15; Photos by Chandler Smith ’13 and Mallory Zink