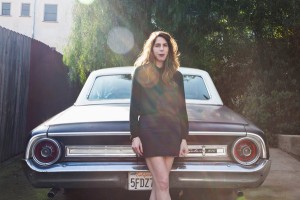 Rachel Kushner, the 2009 Summer Common Reading author, returned to Kalamazoo College for the 2013 commencement, where she received an honorary degree (Doctor of Humane Letters) and delivered an important speech about the future and “movements of the young.”

Kushner asked the Class of 2013 many questions. The most important: “How has this experience of college formed you, and what does it mean, at this intersection of your past, and future?” Kushner compared time to water, always flowing, changing us gradually.

She emphasized the importance of books throughout the course of her speech. “By reading books, you can understand greater patterns in the movement of people through history, even history that you never witnessed yourself.”

Kushner’s talk posited a hypothetical Q & A, the questions of which touched on current news, the young, and novels. A sample question: “Was Occupy, the Arab Spring, the anti-austerity movements across Europe, and in Greece, and now in Turkey—all, by the way, historical events that happened while you were in college—were these essentially movements of the young, but about and including, a whole spectrum of people? —Yes”.

She closed with advice on how to enter the world of art, knowledge, and love. One must commit to “human depth–beyond jobs, profits, debt, petty differences, résumés, and grad school applications. Read, and live engaged with ideas. No matter what happens in your life, no one can take that away from you”.

For 13 years the College’s Summer Common Reading program has brought to campus writers of startling renown. Kushner is no exception, after she became a New York Times Bestseller with her novel from the Summer Common Reading, Telex from Cuba. She’s now making a splash in the literary world with her new novel The Flamethrowers.

The Flamethrowers takes place in the 1970’s. The protagonist is a woman in her early 20s, nicknamed Reno. She moves to New York to become an artist, and there falls in love with an Italian man, and with motorcycles; she quickly becomes the “fastest chic in the world.”

Kushner was born in Eugene, Ore., and graduated from the University of California-Berkley, majoring in political economy. After Berkley, Kushner headed to Columbia University to earn her Master of Fine Arts degree.

She now lives in Los Angeles. She drives a ’64 Ford Galaxie 500, much like the ride of her character, Reno.