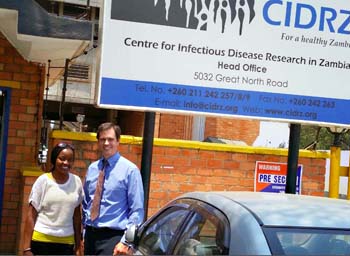 Conventional wisdom holds that it’s a small world, but really it’s a big world with a lot of K in it. “A young woman came by my office to introduce herself,” wrote Charles Holmes ’93, M.D., M.P.H., the director and chief executive officer of the Centre for Infectious Disease Research (CIDRZ) in Zambia (Lusaka).

Charles was writing to his old biology professor, Paul Sotherland, the former professor of biology who now serves as the College’s coordinator of educational effectiveness. CIDRZ is a non-governmental organization that improves access to quality healthcare in Zambia through capacity development and implementation of sustainable public health programs. And the young woman who stopped by Charles’s office was Idah Chungu ’13, who earned her degree at K (economics) as an international student. She matriculated to K from Zambia.

Charles told Paul the rest of the story. “In a funny coincidence, my parents were biking through Kalamazoo a few months ago and my dad was wearing the Zambian soccer jersey that I gave him. Idah noticed the jersey and ran over to them to introduce herself and find out what he was doing wearing a Zambian soccer jersey in the middle of Michigan. He recommended that she stop by our offices once she was back in Lusaka, which led to yesterday’s meeting.”

Charles majored in biology at K (hence his strong connection to Paul). He completed medical school at Wayne State University, and internal medicine and infectious disease training at Massachusetts General Hospital and Harvard Medical School. Prior to his position in Lusaka, he was deeply involved in the global response against HIV disease and AIDS. He loves Zambia and its people. “I highly recommend a trip,” he wrote to Paul, ever the naturalist. “We saw African wild dogs and a pennant winged nightjar in Kafue National Park last weekend!”

Zambia is located in south eastern Africa, bordered by Angola on its west, and Zimbabwe and Mozambique on its east. Both far from and near to the epicenter of the Ebola outbreak in West Africa (Sierra Leone and Liberia). “We’re integrating some Ebola sensitization into our community work,” Charles wrote. “And we’re trying to put a team together to go west to help. It’s challenging because we’re always stretched thin simply running our own projects.”

After graduating from K, Idah worked for the College’s advancement division and for the Center for International Programs. She is currently looking for a job in Lusaka. Who knows, perhaps she and Charles will one day become colleagues. It is, after all, a big world with a lot of K in it.