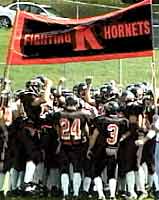 Football team under the K-banner

While we don’t know for sure, tradition has it that Kalamazoo College adopted its colors at the suggestion of Clarke Benedict Williams. Williams attended Princeton, whose colors are orange and black, and arrived on the Kalamazoo campus in 1894 where he taught mathematics and was later also Dean. The earliest mention of the colors orange and black is in the November 1902 student newspaper The Index, which also referred to the football team as “straightforward, clean, and plucky” athletes.